Reddy and Umam: A study to assess the efficacy of topical cyclosporine A 0.05% in the management of dry eye with meibomiam gland dysfunction

A study to assess the efficacy of topical cyclosporine A 0.05% in the management of dry eye with meibomiam gland dysfunction

Introduction: Dry eye is a multifactorial disease of the tears and ocular surface that results in symptoms of discomfort, visual disturbance, and tear film instability with potential damage to the ocular surface. It is accompanied by increased osmolarity of the tear film and inflammation of the ocular surface. Meibomian Gland Dysfunction (MGD) is an abnormality of the meibomian gland that blocks the secretion of lipids. Without sufficient lipid production, tears evaporate quickly causing Dry Eye.

Materials and Methods: This was a prospective observational study done on 100 patients at the Department of Ophthalmology Basaveshwar teaching and general hospital, on patients of dry eyes due to meibomian gland dysfunction. Patients who were diagnosed with dry eyes due to meibomian gland dysfunction were invited to take part in the study. Patients were divided randomly into two groups of 50 patients each. This study, was explained in detail to them. An informed consent was obtained. Patients fulfilling the inclusion criteria were listed.

Result: All OSDI scores (symptom intensity, frequency and aggravation) revealed decreasing patterns throughout the observation period in both the groups. In single analysis, the cyclosporine A 0.05% group showed a significant improvement for each score at 3 months (p < 0.01, p = 0.01, p = 0.02, respectively). The mean TBUT after treatment in the group A (cyclosporine A group) increased to 12.36± 3.58(p<0.001) seconds, and in the group B (Control group) the TBUT score increased to 11.01±3.06 seconds. After 3 Months, there was statistically significant improvement in the mean Schirmer’s scores in both the treatment groups, however improvement was significantly greater in Cyclosporine A group.

Conclusions: Findings from our study showed that there were significant improvements in the dry eye conditions due to defect in meibomian gland by treatment of topical Cyclosporine A 0.05% and sodium hyaluronate 0.1%.

Dry eye is a multifactorial condition of the tears and ocular surface that causes symptoms such as pain, visual impairment, and tear film instability, as well as the possibility for ocular surface injury. It is accompanied by an increase in the osmolarity of the tear film as well as ocular surface irritation.1, 2 Tears are comprised of three layers. The fluid layer that nourishes the eye is known as the aqueous layer. The mucin layer contains mucus that aids in the adhesion of the aqueous layer to the eye's surface. Tears are made up of a lipid coating created by the meibomian glands in the eyelids, which serves to prevent evaporation and acts as a barrier to the environment. Meibomian gland dysfunction is an anomaly of the meibomian gland that prevents lipid release. Tears evaporate quickly if there is insufficient lipid production, resulting in dry eyes.3

Meibomian Gland Dysfunction occurs when the ductal epithelium of the meibomian glands becomes hyperkeratinized, resulting in increased intraductal pressure and stoppage of normal meibum flow. Meibomian ducts obstruction leads to accumulation and thickening of lipids and also colonisation of bacteria on the lid margins and inflammation of the lid margins. The secondary outcome may be defect of the tear film and related dry eye disease.4

Itching burning and a foreign body feel are among symptoms of dry eye.

Symptoms are frequently worse when first wake up, although heat and/or massage is effective to relieve symptoms. 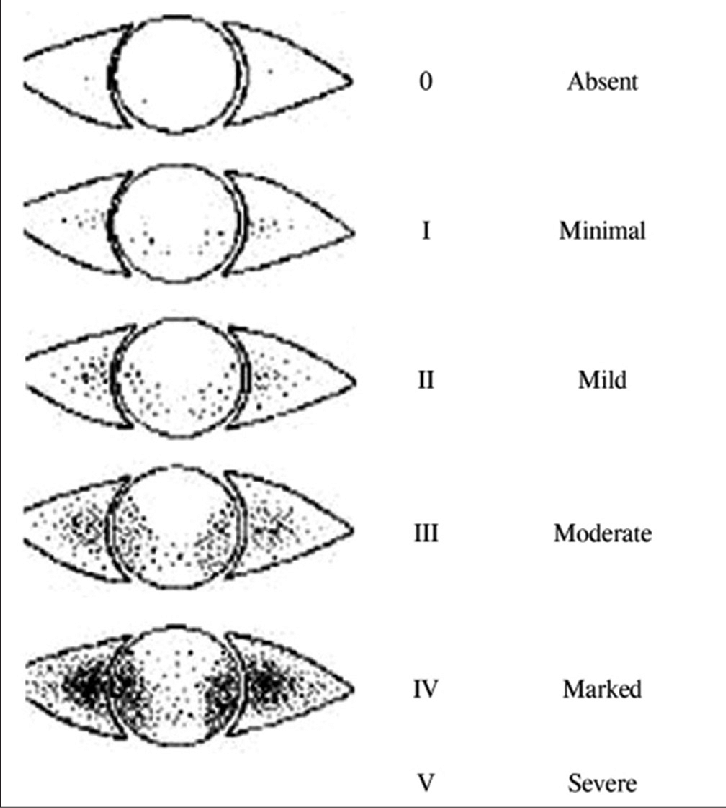 Various MGD treatments, like lid cleansing, eyelid warming massage, and artificial tears, are commonly employed. Systemic antibiotics, such as oral tetracycline, macrolides, or topical anti-inflammatory medications, such as topical steroid eye drops, may be administered if necessary. These treatments, however, are generally not effective. Anti-inflammatory drugs such as steroids, tetracycline, and cyclosporine A (CsA) have been used to treat inflammation in MGD and ameliorate the symptoms and signs of the disease. 7

Cyclosporine A is a highly selective immunomodulator that mainly affects T cells and does not impair the phagocytic system as much as corticosteroids do. It has a favourable safety profile because it does not interfere with wound healing or cause lens alterations. Till now, topical cyclosporine A 0.05 percent is the only medication that has been demonstrated to boost the production of the patient's own natural tears in clinical trials. In addition to chronic dry eye, MGD, ocular rosacea, and contact lens sensitivity, it has been explored for the treatment of additional ophthalmic disorders.4

This study is done to know the efficacy of topical cyclosporine A 0.05% in the treatment of dry eye caused due to meibomian gland dysfunction.

This study is a prospective observational type of study done at the Department of Ophthalmology in Basaveshwar teaching and general hospital, on patients of dry eyes due to meibomian gland dysfunction.

Patient was excluded from the study if He/She:

Patients who were diagnosed with dry eyes due to meibomian gland dysfunction were invited to take part in the study. An informed consent was obtained from the patients after explaining the study. Patients fulfilling the inclusion criteria were listed. Patients were advised lid hygiene and lid warming massage for 10min before sleep, 0.1% sodium hyaluronate eye drops (preservative free) were instilled 4 times a day. Topical 0.05% CsA eyedrops was instilled twice a day in the experimental group. The group without cyclosporine eye drops use was defined as a control eye group. 50 study subjects were included in experimental group whereas 50 subjects were included in control group. All patients were evaluated at their first visit and followed up after 3month of treatment to determine the therapeutic effect. Institutional ethical clearance was obtained before the commencement of the study.

There was improvement in OSDI scores with respect to symptom intensity, frequency and aggravation in both groups. In single analysis, the cyclosporine A 0.05% group showed a significant improvement for each score at 3 months (p < 0.01, p = 0.01, p = 0.02, respectively).

Mean Tear Film Break Up Time (TBUT) and Schirmer’s Test of both the groups. 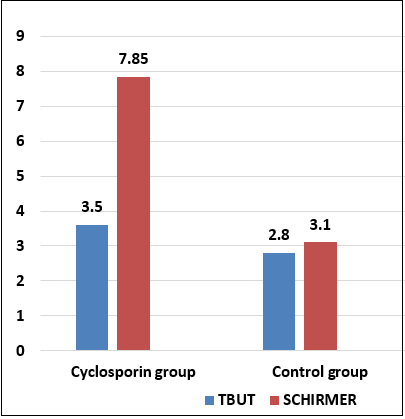 Percentage of patients with improvement in vascular engorgement on lid 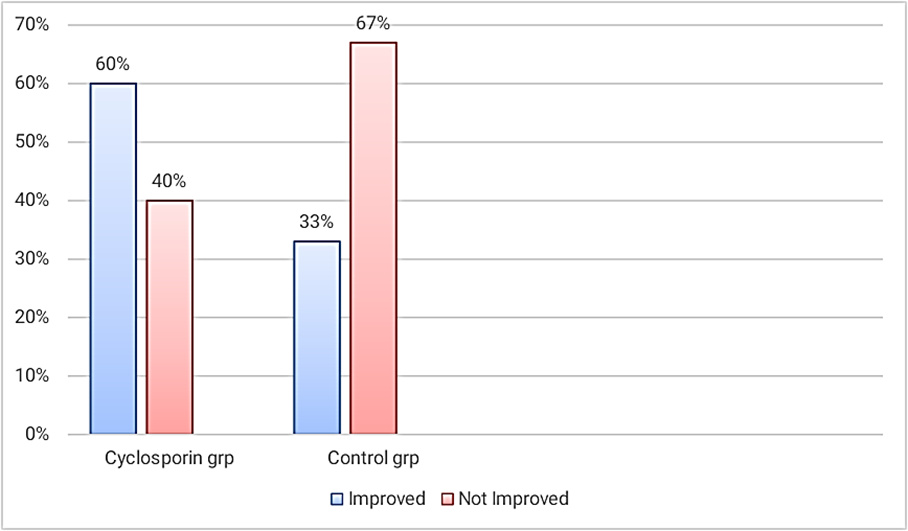 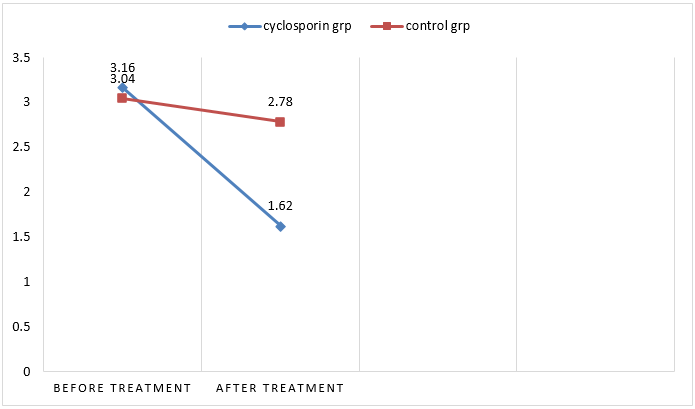 The objective of this study was to demonstrate the efficacy of cyclosporine A 0.05% in dry eyes caused by Meibomian Gland Dysfunction

In the present study female outnumbered male. In a study done by Ho-Yun Kim et al7 on 53 patients observed that 14 were male and 36 were females. The study by Jitender Phogat et al8 included 18 women and 7 male patients. So these findings The patients were treated with cyclosporine 0.05% eye drops twice daily. Females are at a substantial risk factor for both DED and MGD development.8, 10, 11 Because the androgen and oestrogen receptors are both present inside the meibomian glands, this could be related to the effect of hormonal changes on meibomian production.