Aim: To study the clinical profile of anterior uveitis in patients attending the Ophthalmology department of tertiary health centre of central India

Materials and Methods: A cross-sectional, observational study was done in the department of Ophthalmology of tertiary health centre from January 2017 to July 2019. A total of 199 cases of anterior uveitis were studied to assess their clinical presentation and etiology. After thorough history taking, demographic data and clinical pattern were documented. Comprehensive ophthalmic evaluation, necessary laboratory investigations and radiological imaging were performed to establish the etiology.

Conclusion: Patients with anterior uveitis most commonly had acute presentation. The disease was rarely bilateral and was mostly non-granulomatous in presentation. It was mostly idiopathic and among the known etiological factors, trauma was the most common cause.

The term uveitis encompasses a large group of intra ocular inflammatory diseases of varying etiology which involves not only the uveal tract but also adjacent structures including the retina and vitreous. Anatomically, it is classified as anterior, intermediate, posterior, and panuveitic types depending on the part of the uveal tract primarily affected.1 Anterior uveitis which can be further sub-divided into iritis, anterior cyclitis and iridocyclitis, is the most common type with a varying incidence across the globe.2, 3, 4 Another important aspect of anterior uveitis is the course of the disease. According to the Standardization of Uveitis Nomenclature (SUN) criteria, acute cases are those with <3 months duration, chronic cases extend beyond the 3-month time frame while recurrent anterior uveitis is relapsing disease separated by > 3 months without treatment.1 Additionally, depending on the underlying pathology, anterior uveitis can also be classified as granulomatous and non-granulomatous. Granulomatous uveitis has a more chronic course, compared to non-granulomatous and is usually associated with systemic diseases and autoimmune conditions.

Anterior uveitis has a diverse etiology and may occur as a result of trauma, infectious and non-infectious ocular or systemic diseases as well as masquerade syndrome. Many times, it can be the initial manifestation of some systemic disease. It usually presents with a painful red eye with mild to moderate diminution of vision, but if not treated correctly and timely, can result in sight threatening sequelae like macular edema, band shaped keratopathy and in severe cases, phthisis bulbi.

The precise cause of anterior uveitis is often obscure, and the correct diagnosis is often challenging. By specifying uveitis as anterior, intermediate or posterior, acute or chronic, granulomatous or non-granulomatous, and by observing the clinical features, an appropriate provisional diagnosis can be made. This can be confirmed by formulating a targeted systemic work-up and relevant investigations. This will not only help in making a correct diagnosis and instituting appropriate treatment, but will also minimize patient inconvenience and financial burden.

Hence, the present study was undertaken with an aim to study the clinical profile of anterior uveitis at a tertiary health centre of central India which caters to the health needs of the population of about eight districts.

This was an institution based cross-sectional observational study that was conducted after getting approval from the institutional ethical committee. All patients with anterior uveitis, presenting to the department of Ophthalmology between January 2017 and July 2019 were enrolled. Those patients having other forms of uveitic entities like intermediate, posterior or pan uveitis were not included. A standard proforma was filled in all cases which included demographic data, chief complaints, history of presenting illness, past history, personal history, medical history and history of treatment taken for ocular and other ailments. Details of disease profile like laterality and chronicity were also documented. A comprehensive ophthalmic examination was done which included best corrected visual acuity, slit lamp examination for anterior segment clinical signs, intra ocular pressure (IOP) measurement by applanation tonometry, and dilated fundus examination using 90D lens and indirect ophthalmoscope. All patients underwent a standard protocol of investigations that included total and differential blood cell count, hemoglobin, ESR, random blood sugar and CRP. Depending upon the history provided by the patient, systemic symptoms and full ocular examination, probable diagnosis was made, following which patients were directed to specific laboratory investigations that included RA factor, HLA B27, Mantoux test, HIV, VDRL, ELISA for infectious etiology, urine analysis and radiological investigations in the form of x-ray chest, sacroiliac joint and lumbo-sacral spine. Where needed, specialists in rheumatology, neurology and infectious diseases were also consulted and the final etiological diagnosis was then made.

Distribution of patients according to age

Distribution of patients according to gender

We observed that the disease was predominantly unilateral (n=183; 91.95%) with only 5.52% cases being bilateral. A very small percentage of cases (n=5; 2.53%) had alternating disease presentation. Most patients (n=175; 87.93%) had acute presentation of uveitis (Figure 1), while 6 (3.02%) patients had a recurrent course of disease. Non granulomatous uveitis accounted for majority (95.47%) of cases. Table 3, Table 4, Table 5 the salient features of disease presentation in terms of laterality, onset and pathological type.

Distribution of patients according to laterality

Distribution of patients on the basis of course of disease

Distribution of patients according to pathological type

As far as the etiological diagnosis was concerned, a specific diagnosis could not be made in 111 (55.7%) patients. Among the identifiable causes of anterior uveitis, non-infectious etiology was found in 80 (40.2%) cases among which traumatic uveitis (Figure 2) was the most common cause, seen in 43 patients (21.7%). HLA B-27 ankylosing spondylitis (Figure 5) was present in 4 (2%) patients. Infectious etiology could be determined in only 4% cases. The distribution of etiological factors is shown in Table 6.

Distribution of patients according to etiology

In our study, no sight threatening complications were observed in majority of the patients (n=133; 66.8%). The complications which were seen, included persistent posterior synechiae (Figure 3) in 42 patients (21.1%), complicated cataract (Figure 4) in 7 patients and band shaped keratopathy in 5 patients. Phthisis bulbi, an end stage complication of the disease was seen in eyes of 4 patients. Table 7 shows the distribution of various complications observed in this study.

Distribution of patients according to etiology 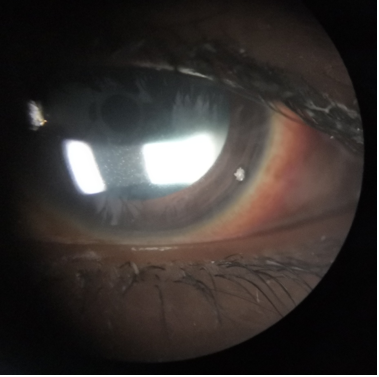 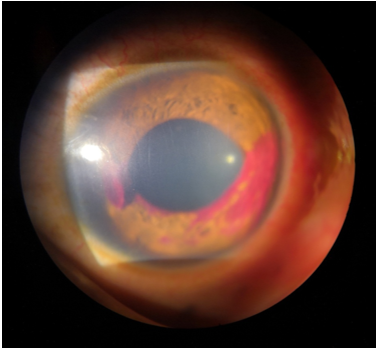 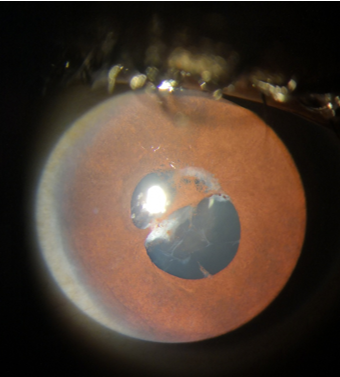 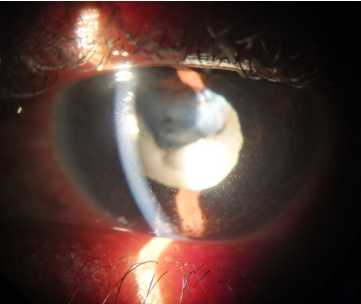 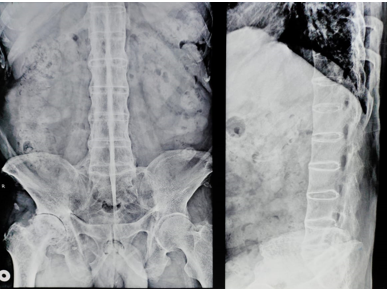 Uveitis is an important and a common cause of preventable visual impairment. Comparison of its statistics from different studies is difficult due to wide variations in its geographical distribution, differences in diagnostic criteria, investigation modalities and treatment.

In this cross-sectional study, the age of the patients ranged from a minimum of 10 years to a maximum of 86 years with a mean age at presentation of 36.9±17.2 years. The maximum (39.7%) number of patients was young adults in the age group of 21–40 years. Various Indian studies from northern, southern and western India have also reported patients of similar age group to be maximally affected.5, 6, 7, 8 Studies from other parts of the world have also documented anterior uveitis to be occurring most commonly between the age of 20-50 years9, 10, 11 and less common under 10 years of age and above 60 years.6 Gender wise, a female preponderance (58.8% females) was noted in our study with the male: female ratio being 1:1.42. This is in accordance with studies by Rodrigues A et al and Srivastava VK et al12, 13 but is in contrast to most other studies, both Indian and those from other nations, which documented a male predominance.8, 14, 15

The disease was unilateral in the majority (91.95%) of cases, and most patients (87.93%) presented with an acute onset. Non-granulomatous uveitis was seen in 95.47% cases while granulomatous uveitis accounted for only 4.53% cases. These observations are comparable with various other studies of Hussein SMP et al, and Madhavi S et al.8, 15 Zheng Y et al. in their study although documented that unilateral presentation and acute onset were more common, but their percentages for both were lesser (unilateral disease in 52.43% and acute presentation in 55.3%) compared to the present study.

A specific etiological diagnosis could be made in only 37.2% of patients in this study. Of these, an infectious etiology was determined in only 4% cases which included tuberculosis, herpes and HIV infection. Non-infectious etiology accounted for 34.2% cases and among these, trauma was the most common (21.7%) causative factor followed by post-operative uveitis in 9.5% patients and phacogenic uveitis in 6.03% cases.

This variation in disease course, pathological type and etiological cause might be due to the difference in geographical area, socioeconomic status and availability of the diagnostic facilities and treatment modalities.

Uveitis can result in a variety of complications, some of which can be sight threatening. In the present study, complications were seen in 32.2% patients only, most of whom had either chronic or recurrent disease. The most frequently observed complication was persistent posterior synechiae in 21.8% patients, followed by complicated cataract (3.6%) and band shaped keratopathy (2.5%). Other less frequently noted complications included secondary glaucoma and macular edema. Only one eye had become phthisical.

Anterior uveitis is a commonly encountered disease in ophthalmic practice and if not diagnosed and managed promptly, can result in vision threatening complications. Having an extensive list of causes and varied clinical presentation, making a specific diagnosis becomes difficult. This becomes even more challenging because of changing clinical profile of the disease with time and simultaneous emergence of new uveitic entities.

Our study conducted at a tertiary health centre of central India, concluded that anterior uveitis most commonly occurred in young females, had an acute presentation and was of the non-granulomatous type. A specific etiology could not be established in majority of our patients despite extensive efforts in the form of serological and radiological investigations and evaluation for systemic diseases. Of the identifiable etiologies, the most common cause established in this study was blunt trauma.