Background: This study was conducted to evaluate the visual field changes in tubercular patients on anti-tubercular therapy and to assess the reversibility of these changes after the discontinuation therapy.

Materials and Methods: This study was conducted as a prospective analytical study at tertiary care centres in Bhopal and Jabalpur on all newly detected tuberculosis patients. Ocular history, relevant history was recorded and detailed ocular examination was done at the time of presentation, before initiating ATT. All the patients were followed up periodically till the cessation of treatment and three months thereafter.

Conclusion: Ethambutol, even in recommended dose according to DOTS, has been associated with ocular toxicity which manifests in the form of painless progressive loss of vision, color vision defects and visual field defects. Though these changes are usually reversible, few patients have irreversible damage. Thus, patients receiving ethambutol must be explained regarding these effects and followed up periodically.

Tuberculosis, though the oldest known infectious disease, remains the leading cause of death worldwide from a single infectious agent.1 Though, the infection can be observed all over the World, majority of cases are documented from low-middle income countries.2 India contributes to one fifth of the global burden of tuberculosis.3 Primarily, it is a pulmonary disease, but it can manifest as extra-pulmonary TB and may affect any organ other than lungs (e.g., pleura, lymph nodes, abdomen, genitourinary tract, skin, joints and bones, or meninges.4

To combat this problem, Directly Observed treatment Short course (DOTS) is given under the umbrella of revised National Tuberculosis Control Program (RNTCP) throughout the country. The program caters different regimen, for different durations based upon the category of tuberculosis.3 Isoniazid, Rifampicin, Pyrazinamide, and ethambutol are first line antitubercular drugs.5 Ethambutol has been associated with visual side effects, especially dose dependent optic neuropathy. Ethambutol induced optic neuropathy is characterized clinically by loss of central vision, which is usually painless and progressive. Patient may also perceive decreased color perception, especially of red green color, which is usually an early feature.6, 7 Visual field defects including the centrocaecal scotoma are commonly observed in these patients, however, temporal defects as well as constrictions of peripheral field can also be observed in these patients.5, 8, 9, 10

The ethambutol induced optic neuropathy is usually reversible after the drug is stopped; 11 however, few studies report non reversible effects and permanent optic neuropathy.12, 13 With the above background, this study was conducted to evaluate the visual field changes in tubercular patients on anti-tubercular therapy and to assess the reversibility of these changes after the discontinuation therapy. The primary objective of the study was to analyse visual field changes following initiation of ATT and to assess the regression of visual filed changes and improvement of visual acuity after stopping ATT.

The present study was conducted as a prospective analytical study at DOTS centre in collaboration with Department of Ophthalmology, Netaji Subhash Chandra Bose Govt medical college, Jabalpur and Kamla Nehru Hospital, Bhopal, during the study period of 2 years i.e. from 16th January 2018 to 15th January 2020. All the patients diagnosed as “new case” of tuberculosis (pulmonary or extra-pulmonary), belonging to age range of 18 to 70 years of either gender, reporting at the study area during the study period and willing to participate in the study were included. Patients who were on anti-tubercular therapy (dosage of ethambutol – 15 mg/kg PO qDay) already, with history of tubercular meningitis, renal diseases, past history of anti-tubercular therapy, history of vasculitis, demyelinating diseases, other infectious causes of optic neuritis and optic disc edema were excluded.

Statistical analysis- Data was entered in MsExcel and IBM SPSS software version 20 was used for data analysis. Chi square test was used to assess the ocular changes during various follow up. P value less than 0.05 was considered statistically significant.

A total of 40 cases of newly diagnosed tuberculosis were registered with mean age of 38.4±13.99 years.

Distribution of patients according to baseline variables

Majority of patients with tuberculosis belonged to 31 to 40 years of age (27.5%). Males were predominantly affected (70%) as compared to females (30%). About 57.5% cases presented with pulmonary tuberculosis and duration of therapy in majority of cases was 9 months with mean duration of 11.3±4.2 months.

A total of 80 eyes of 40 patients were further analyzed in our study.

In present study, normal color vision was noted in all the eyes, whereas at the end of 3 months of initiation of ATT, 15% eyes had defectivecolor vision, most common being blue yellow defect (5%). Thereafter, color vision improved significantly after 3 months of cessation of ATT (p<0.05). 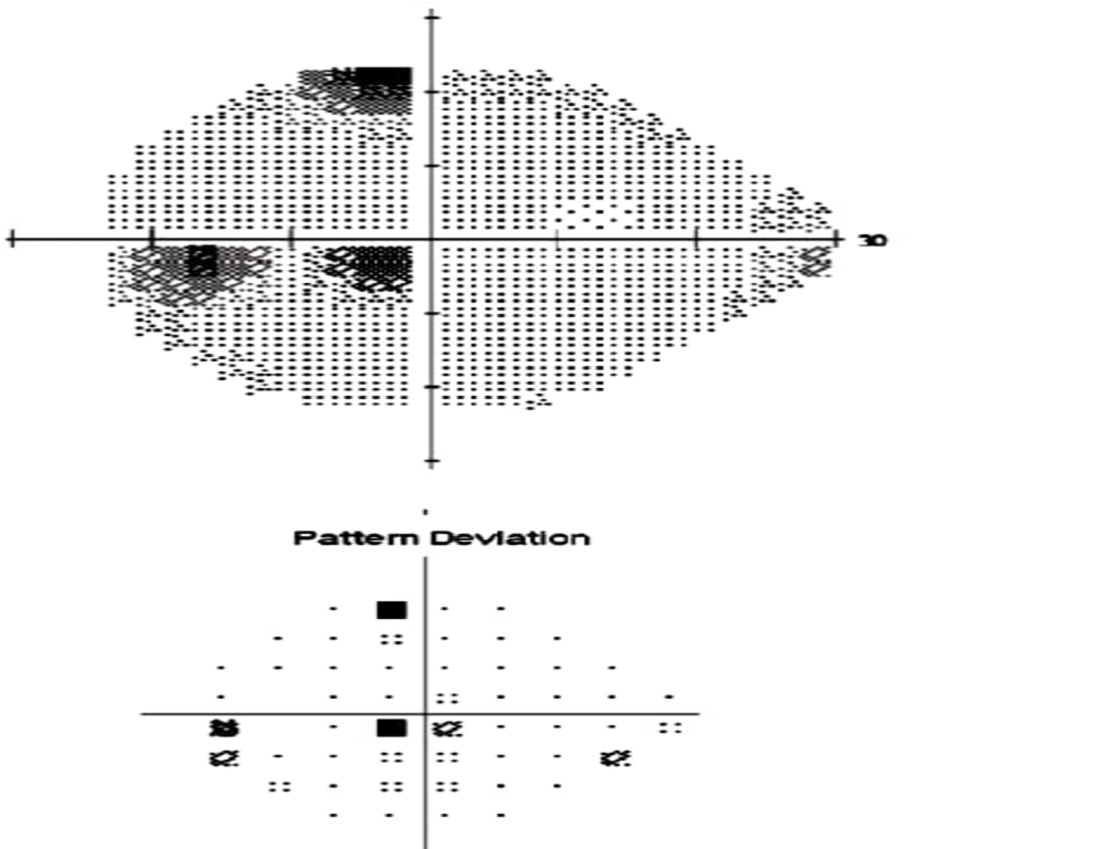 Field changes showing a normal visual field in the patient h, after cessation of ethambutol therapy 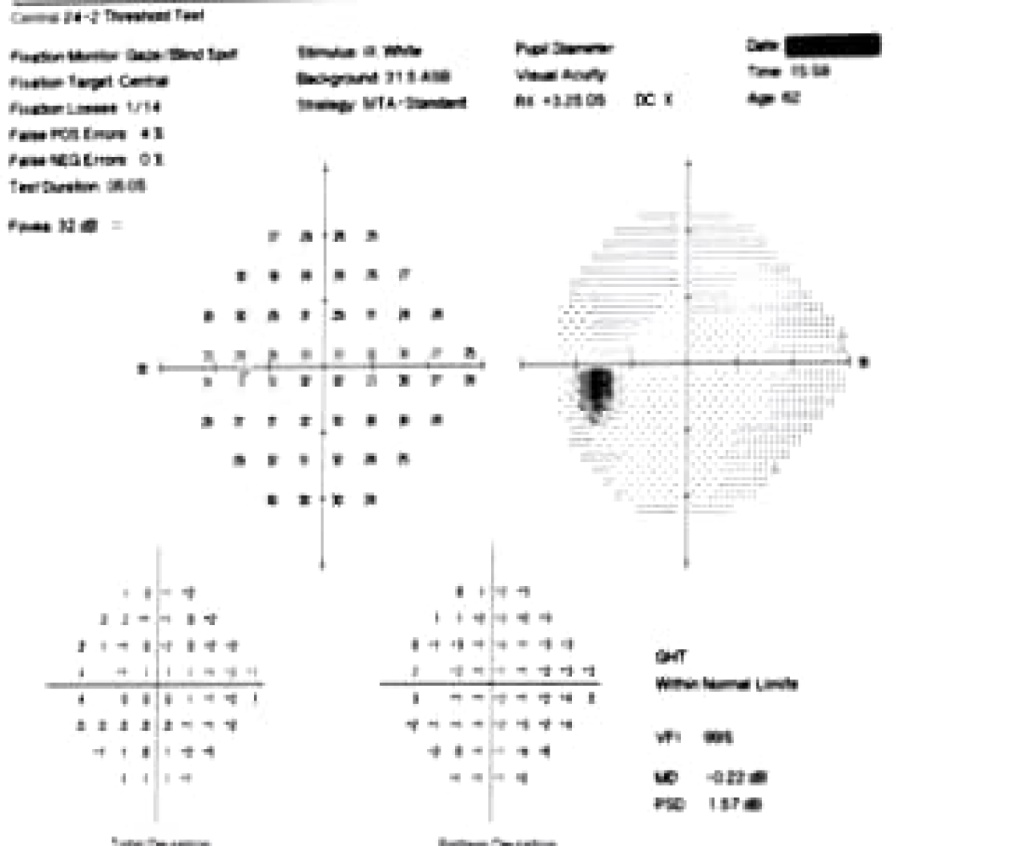 Tuberculosis is still one of the major cause of morbidity as well as mortality especially in low middle income countries. Though anti-tubercular drugs are effective in management of tuberculosis, they are associated with several side effects. Ethambutol, a first line bacteriostatic anti-tubercular drug has been associated with toxic optic neuropathy in a dose dependent manner.14, 15 The exact mechanism of ethambutol induced optic neuropathy remains unknown, however, it has been documented that EMB is a metal chelator, and has structural similarity with human mitochondrial DNA. When administered, the drug inhibits arabinosyl transferase, and prevents cell wall synthesis in mycobacteria. Apart from this, bacterial ribosomes allow the drug to disturb human mitochondria. It has been postulated that it promotes apoptosis of retinal ganglionic cells via two mechanisms i.e. decreased levels of copper in mitochondria or accumulation of zinc in lysosomes of retinal ganglion cells.16, 17 Particularly, retinal ganglion cells located at papillomacular bundle is susceptible to damage, but ethambutol induced dysfunction of lysosome may lead to non-specific changes in all retinal ganglionic cells. 16, 17

Decreased color vision and contrast sensitivity is one of the early feature of ethambutol induced optic neuropathy. Though, the typical type of color vision abnormality followed by ethambutol is not clearly known, acquired color vision defects have been categorized as blue yellow and red green defect. Acquired red-green defects are similar to inherited color defects whereas blue-yellow defects are perceived as acquired.20 In our study, Blue yellow defect was the most common defect in color vision following ethambutol. Color vision restored to normal in significant proportions of patients after the cessation of ethambutol therapy (p<0.05). Similarly, Cruz et al documented restoration of color vision to normal in 83.3% patients after discontinuation of ethambutol therapy.20 Sjoerdsma et al postulated that ethambutol shift the threshold for chromatic discrimination but does not alter the absolute sensitivity of the cone system in goldfish.22 However, Van Dijk et al23 and Kohler et al24 hypothesized that ethambutol affects the inner plexiform layer of retina and most common retinal cells affected due to ethambutol toxicity are bipolar cells, amacrine cells, and horizontal cells. Our study findings were supported by findings of Polak et al, in which the authors documented blue-yellow color-vision changes as one of the earliest feature of ethambutol induced toxicity.25 However, Kaimbo et al documented red-green and blue-yellow combined (13.1%) followed by blue-yellow defect (7.5 %) as the most common color defect in patients receiving ethambutol.26

The present study had certain limitations. Though the duration of ATT was considered, mean duration of occurrence of visual impairment could not be observed as patients were followed up only twice i.e. after 3 months of initiation of ATT and after 3 months of stopping ATT. Secondly, risk factors associated with visual field defects and their reversibility could not be assessed.

Ethambutol, even in recommended dose according to DOTS, has been associated with ocular toxicity which manifest in the form of painless progressive loss of vision, color vision defects and visual field defects. Though these changes are usually reversible, few patients have irreversible damage. Thus, patients receiving first line anti-tubercular drug, especially ethambutol, must be explained regarding these effects and followed up periodically so that ethambutol induced optic toxicity could be identified early and appropriate intervention can be applied to prevent irreversible damage.