Purpose: To study epidemiology, biometry and visual outcomes (with or without posterior capsulorhexis) in cases of pediatric traumatic cataract.

Materials and Methods: This was a prospective observational study conducted on 30 children of traumatic cataract belonging to an age group of less than 16 years. All patients were subjected to detailed history and ocular examination. Patients underwent cataract surgery with or without intraocular lens (IOL) implantation. Posterior capsulorhexis with posterior optic capture was done in all patients presenting with primary posterior capsular opacity. All patients were followed up till 6 months and surgical outcomes in terms of Best Corrected Visual Acuity (BCVA), and visual axis opacification (VAO) were observed.

Result: Firecracker injury was found to be the most common causal agent, followed by arrow and ball injuries. Males were more commonly injured than females (70%:30%). Open-globe injury was more frequent than closed globe injury (CGI) (53.3%:46.7%). Anterior capsular rupture was the most frequent preoperative complication. Mean axial length was 22.53 which was not significantly different from the fellow eye. 3 patients were left aphakic, 10 patients underwent single piece IOL implantation and 16 patients underwent multipiece IOL implantation. Anterior chamber IOL (ACIOL) was implanted in one case. Intraoperatively 6 patients were found to have posterior capsular plaque and were implanted with multipiece IOL with posterior optic capture. Visual acuity significantly improved in 21 out of 30 eyes from baseline after cataract surgery (p<0.001). 9 patients (30%) had posterior capsular opacification (PCO) on follow up.

Ocular trauma is one of the most common causes of visual morbidity which is associated with significant psychological as well as economic burden to not only patients but also to the society.1, 2, 3, 4 In India, ocular injuries account for approximately 20.53% among all injuries which may affect vison.5 Ocular trauma may be mechanical (open globe injury and closed globe injury) or non-mechanical, both of which may cause traumatic cataract.6 The mechanism of traumatic cataract following ocular injury is complex which may be due to rupture of the lens capsule or zonular ligament, the oscillation of lens cortex or disorder of lens metabolism caused by collision.7

The study was conducted after taking approval from the institutional ethics committee. It was a hospital based, prospective, observational study conducted on 30 children diagnosed with traumatic cataract from December 2019 to June 2020. All patients aged < 16 years having unilateral traumatic cataract and their parents giving written informed consent were included in the study. Patients with bilateral cataract, those not willing for surgery or patients lost to follow up were excluded from the study.

Detailed data regarding socio-demographic variables such as age, gender and socioeconomic status was obtained from all the study participants. Data regarding time elapsed since injury, mode, type and nature of injury was obtained and documented in pretested semi structured questionnaire. All patients were subjected to detailed ocular examination including visual acuity and slit lamp examination of affected and fellow eye. The diagnosis and classification of ocular trauma was based on the Birmingham Eye Trauma Terminology (BETT) which is a standardized ocular trauma definition and classification system for mechanical eye injuries.11 Axial length measurement and corneal topography was done for all patients. IOL power was calculated using the Hoffer Q formula. Wherever required, additional investigations such as B scan ultrasonography, MRI or CT scans were carried out. Cataract extraction was performed along with primary repair, in case of open globe injuries, using phaco assisted lens aspiration and IOL was implanted. Posterior capsulorhexis with posterior optic capture was done in those patients who presented with posterior capsular opacity. Postoperatively, all patients were given topical corticosteroid and antibiotics. The patients were followed up at 1 week, 1 month and 6 months postoperatively, with appropriate amblyopia management and adequate refractive correction. Surgical outcomes in terms of BCVA, and visual axis opacification (VAO) were observed.

a: Post traumatic cataract; b: Both anterior and posterior rhexis made; c: Multipiece injected over anterior capsule; d: Posterior capture of optic 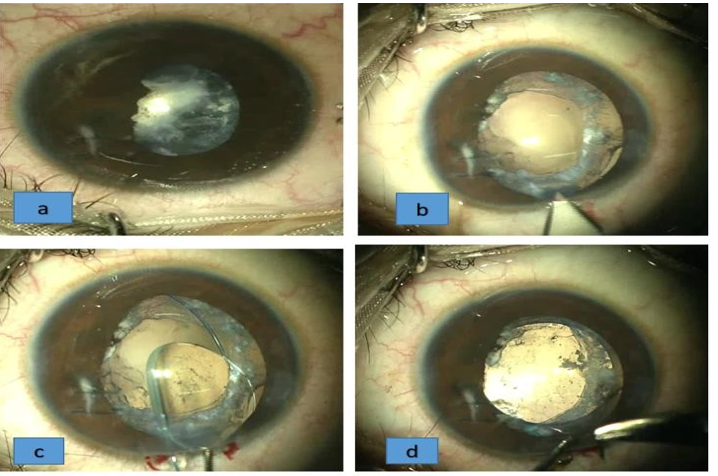 Data was compiled using MS Excel and analysed using IBM SPSS software version 20. Categorical data was expressed as frequency and percentage and numerical data was expressed as mean and SD. T test was calculated for assessing difference between mean whereas Chi square test was applied for calculating the difference in proportions. P value less than 0.05 was considered statistically significant.

Distribution according to nature and type of injury

Most common cause of traumatic cataract was firecracker injury (16.7%) followed by blunt injury by ball (13.3%). Open globe rupture was frequently observed as compared to closed globe injury in 53.3% and 46.7% cases respectively.

Distribution according to complications

Comparison of biometry between affected eye and fellow eye

[i] The visual acuity significantly improved as compared to baseline after cataract surgery (p<0.05).

Intraoperatively 6 (20%) patients were found to have posterior capsular plaque and were implanted with multipiece IOL with posterior optic capture.

Open globe rupture was frequently observed in 53.3% cases in our study as compared to closed globe injury in 46.7%. This could be attributed to penetrating causes contributing to traumatic cataract in our study. These findings were supported by findings of Xu et al, in which out of 117 cases, open globe injuries were observed in 91 cases.15

Though, the difference in axial length, biometry as well as IOL power between affected and normal eyes were statistically insignificant but the mean K1 was significantly lower in affected eye as compared to normal eye, which could be attributed to flattening caused by the injury. Multipiece IOL was used in majority of cases (53.3%), whereas ACIOL was implanted in one (3.3%) case. 3 eyes (10%) were left aphakic. Mean power of implanted intraocular lens was 21.03±7.5 D. Jinagal et al recorded average axial length in affected eye as 22.26 ± 2.21 mm and mean IOL power implanted in these patients was 22.96 ± 0.89 D.9 In a study by Hilely et al, cataract removal was conducted in 16 cases, out of which, intraocular lens (IOL) was implanted in 14 (87.5%) cases, whereas in 2 eyes, IOL was not implanted.16

Though, cataract surgery followed by IOL implantation is the management of choice in cases of pediatric cataract, but post operative inflammation, secondary membrane formation, and amblyopia are potential challenges observed following surgery.9 Our study documented that visual acuity significantly improved following cataract surgery (p<0.05) at final follow up. 20% cases were found to have posterior capsular plaque intraoperatively and underwent posterior optic capture with multipiece IOL. Though long-term visual outcome was better in significantly high proportion of patients, however 30% eyes developed posterior capsular opacification on follow up. In a similar conclusion, Jinagal et al in their study also obtained satisfactory visual outcome in children with traumatic cataract.9 Trivedi et al documented higher rate of PCO formation in paediatric eyes with traumatic cataract.17 However, Benezra et al in their study observed visual axis obstruction in as high as 100% cases in eyes which underwent traumatic cataract surgery without Primary Posterior Capsulotomy (PPC) and anterior vitrectomy.18 Verma et al reported significantly lower incidence of Visual axis obstruction in patients who underwent PPC during cataract surgery as compared to the group who did not.19 Thus, posterior capsulotomy is recommended to maintain clear visual axis and avoiding the need of secondary interventions.

Traumatic cataract in pediatric population is one of the leading causes of treatable blindness affecting higher proportions of males. Such cases can be effectively managed with cataract surgery with IOL implantation. Visual outcome has shown to improve significantly following surgery but rate of PCO is high, which can be effectively managed with posterior capsulorhexis and posterior optic capture.