Shrivastava and Shrivastava: Role of B-scan in management of ocular trauma

Role of B-scan in management of ocular trauma

Background: The present study aimed to study the effectiveness of B scan in assessing the posterior segment in patients with ocular trauma, so that further treatment plan can be decided and prognosis can be improved.

Materials and Methods: The study was conducted as a cross-sectional study at tertiary care centre during the study period of 1 year on 42 patients presenting with history of ocular trauma. Patients were subjected to detailed history and ocular examination followed by B scan ultrasonography for ruling out posterior segment pathology.

Results: Mean age of 42.7±20.2 years and 45.2% patients belonged to 41 to 60 years of age. About 54.8% cases were females. About 50% cases had one or the other posterior segment finding. Retinal detachment followed by vitreous hemorrhage were the most common findings, observed in 19% and 11.9% cases respectively. Avulsion of optic nerve was the least common finding (2.4%).

The use of ultrasonography in ophthalmology practice was first done by American ophthalmologists, Mundt and Hughes in the year 1956.5 A scan as well as B scan both the mode are used but B-scan is a valuable tool in detecting posterior segment pathology even in presence of hazy media.6 B scan can be an extremely useful tool in management of ocular trauma, in presence of hazy media and when posterior segment pathologies such as foreign body, avulsion of optic nerve, retinal tear, retinal detachment, vitreous haemorrhage, vitreous detachment, proliferative retinopathy, perforation of sclera etc. are suspected. The present study was therefore conducted at tertiary care centre to study the effectiveness of B scan in assessing the posterior segment in patients with ocular trauma, so that further treatment plan can be decided and prognosis can be improved.

The study was conducted as a cross sectional study at Department of Ophthalmology, Medical College and Hospital, City during the study period of 1 year i.e. from 1st February 2020 to 31st January 2021. The inclusion criteria was all the patients presenting to study centre with history of ocular trauma irrespective of age, gender, mode of injury and visual acuity at the time of presentation. Patients with previous history of ocular surgery, known case of blindness or previous central corneal opacity were excluded from the study.

The study was approved by Institutional ethical committee. Written consent was obtained from all the patients belonging to more than 18 years of age whereas written consent was obtained from parents/ guardians in case of minors. All the cases fulfilling inclusion criteria and presenting to study area during the study period were enrolled. Patient’s name, age, sex, occupation, address, and other sociodemographic data was obtained from all the study participants and entered in questionnaire. Detailed history of trauma, mode of injury, time since injury, any relevant past history was noted. Further, the patients were subjected to detailed clinical and ocular examination. Ocular examination included best corrected VA, anterior segment examination, slit lamp biomicroscopy, intra ocular pressure, fundus examination. All the cases were also subjected to B scan ultrasonography for ruling out posterior segment pathology.

All the cases were managed based upon ocular examination findings. In presence of posterior segment abnormalities such as retinal detachment, retinal tear or avulsion of optic nerve, the patients were referred to higher centre for further management.

The data was compiled using MsExcel and analysed using IBM SPSS software version 20. Data was expressed as frequency and percentage.

Table 1 reveal distribution of patients according to sociodemographic variables. Majority i.e. 45.2% patients belonged to 41 to 60 years of age and 54.8% cases were females. Mode of injury was blunt trauma and trauma by sharp object in 50% cases each. About 28.6% and 21.4% cases presented with counting finger close to face and hand movements respectively.

B scan was done in all the cases (Figure 1). Though B scan revealed normal findings in 50% cases of ocular trauma, remaining 50% cases had one or the other posterior segment finding. Retinal detachment followed by vitreous hemorrhage were the most common findings, observed in 19% and 11.9% cases respectively. Avulsion of optic nerve was the least common finding (2.4%).

Findings of B scan 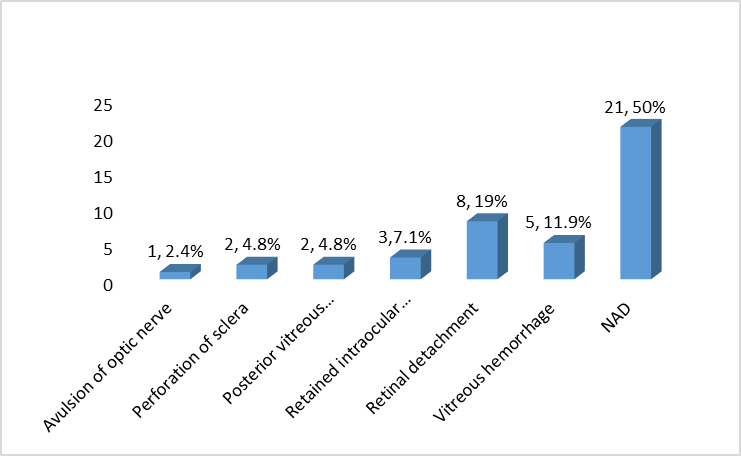 Based upon the findings of ocular examination and B scan, patients were managed. Patients with optic nerve avulsion, retinal detachment, vitreous hemorrhage and retained intraocular foreign body were referred to higher centre immediately after initial management. Wait and watch approach was done for cases with posterior vitreous detachment whereas surgical repair of scleral perforation was done at our centre. Symptomatic and supportive treatment was given to patients with no posterior segment involvement (Table 2).

Distribution according to baseline variables

Intervention as a result of B scan finding

Ocular trauma is one of the most common preventable cause of blindness, provided the cases are timely and appropriately managed. Ultrasonography especially B scan is a simple cost effective and non invasive method which helps in visualization of posterior segment following ocular injury in presence of cloudy media.7 The present study aimed to assess the role of B scan in assessing the posterior segment in patients with ocular trauma, so as to improve the visual outcome and decrease ocular morbidities.

Our study included a total of 42 cases with ocular trauma. Mean age of patients was 42.7±20.2 years and majority of patients belonged to 41 to 60 years of age (45.2%). Similarly, mean age of patients with ocular trauma was 34.2 years and 46 (38.7%) were aged between 25-49 years in a study by Fasasi et al.8 About 51% cases belonged to 21 to 40 years of age in a study by Sindhura et al.9 Thus, ocular trauma is predominantly observed in active age group of population who are more involved in the outdoor works, sports and play and also in the fight and assaults.

However, we observed female predominance for ocular trauma with male:female ratio of 0.82:1. These findings were contrasting to previous studies, in which maximum patients with ocular trauma were males.8, 9 The observed difference between present study and previous studies could be attributed to increased women employment rate, increased risk of injury during work or while reaching at work place.

Trauma, either blunt or penetrating, not only damages the anterior segment but can also cause damage to the posterior segment.10 In present study, blunt trauma and trauma due to sharp objects were the mode of injury in equal proportions of patients. However, in a study by Rai et al, blunt trauma and penetrating trauma were cause of ocular trauma in 29.2% and 70.8% cases respectively. 11 Maurya et al reported blunt trauma in 56% victims.12 In contrast, most common mode of injury was blunt trauma in a study by Sindhura et al.9 Visual acuity at the time of admission was poor in all the cases and it was less than counting finger at 3 feet in almost all the cases. Thus ocular trauma can lead to preventable blindness in active age group.