Gupta and Chaurasiya: Changes in symptoms of dry eyes in health professionals with increased duration of wearing the mask

Background: In normal population and patient, the significant increase in dry eyes manifestations have been observed. Similarly, aggravated symptoms and complaints of dryness have also been observed in clinical and hospital staff by using a face mask for an extended time period. The purpose of the study was to observe the association between symptoms of dry eyes and the duration of using masks in health professionals.

Materials and Methods: An unspecified questionnaire was distributed using Google Forms through different social media platforms, asking each respondent to contribute to the survey. Data were collected from December 2021 to January 2021. Statistical analysis was performed using SPSS software. Statistical significance was considered if p-value was less than 0.05.

Dry eye disease is multifactorial disease of the tears and ocular surface that resulting in ocular discomfort, visual disturbance, and tear film instability.1 During the COVID-19 pandemic, the widespread use of face masks was considered as a key measure to prevent the spread of SARS-CoV-2.2 During this pandemic era, the whole world has observed the corresponding increase in ocular symptoms like irritation, itching, dryness among the population who are using a regular face mask.3 In normal population and patient, significant increases in dry eye symptoms has been observed among regular mask user. This group includes individuals who have never previously suffered from dry eyes.3 As the world has not received proper management and medication against the SARS-CoV-2, using of the mask remains a part of our daily routine.4 The majority of the population described an awareness of air blowing upward from the mask into their eyes.5 This increased airflow likely increases the evaporation of the tear film which, when continuous for hours or days, may result in ocular surface irritation or inflammation.6 The purpose of the study was to observe the association between symptoms of dry eyes and the duration of using a mask.

A Prospective cross-sectional study was carried among 39 health care professionals aged between 20 years and 30 years. An unspecified questionnaire was distributed using Google Forms through different social media platforms, asking each respondent to contribute to the survey by completing the questionnaire and also to share with their social contacts. Data were collected from December 2021 to January 2021. Participants were asked to respond about their age, gender, profession, and the frequency and its severity of dry eye symptoms (i.e. foreign body sensation, dryness, irritation, itching, burning or watering). For symptoms frequency, participants could select never, sometimes, often, always based on the Likert scale. Participants responding to symptoms of dry eyes were asked about the severity using a pre-validated SPEED Questionnaire.7 Participants were also asked if they wore glasses or contact lenses. The working definition of MADE (Mask Associated Dry Eye) was defined as the condition in which dry eye symptoms are present at least sometimes in an individual wearing a mask for 2 hours. By this definition, the individual who was wearing a mask for more than 2 hours was included in the study. The individual who was not wearing masks or wearing masks less than 2 hours were excluded from the study.

Statistical analysis was performed using SPSS software8 (IBM SPSS, version 25; IBM Corp., Armonk, NY, USA). Descriptive analysis was done to summarize the result in mean and Standard deviation and an Odd Ratio was performed to calculate the risk factor for dry eye using 95% Confidence Interval (CI) and P-value (< 0.05). Similarly, Data Normality was evaluated by using the Shapiro-Wilk test (P < 0.05). Spearman rank correlation test was performed to know the effect of severity and frequency of dry eyes symptoms on the duration of wearing masks. Statistical Significance was considered if P-value was less than 0.05.

A total of 50 responses was collected, 11 questionnaires were removed due to incomplete data, leaving 39 questionnaires for analysis. The respondent age was between 20 and 30 years (mean age 24.69; SD 3.56).

Nevertheless, there was a statistically significant relationship between severity of the symptoms and frequency of symptoms (r = 0.638; P = 0.000) which showed a positive correlation (Table 3). 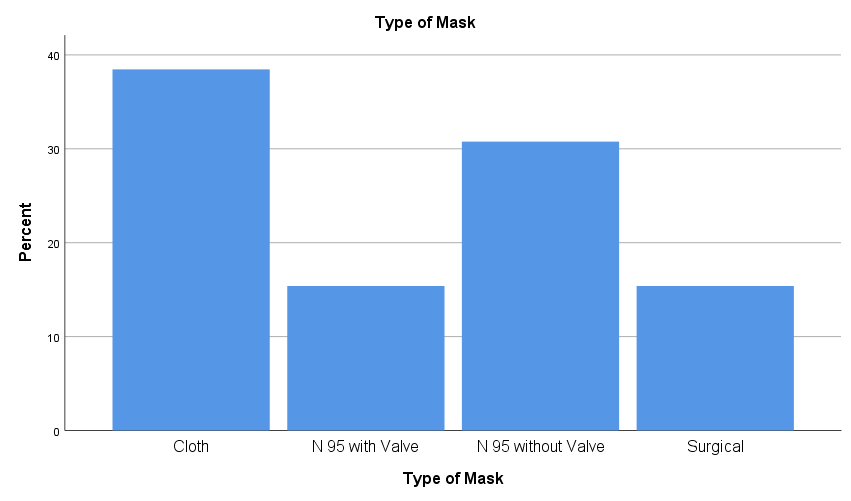 Showing association between frequency of symptoms with hours of using the mask (Significance Level: P < 0.05)

Showing association between Severity of symptoms with hours of using the mask (Significance Level: P < 0.05)

Dry eye disease is common ocular surface disorder and its symptoms include foreign body sensation, dryness /grittiness, itching, burning, stinging, tearing, photophobia, fluctuating or blurry vision.9 The present study aimed to correlate the symptoms of dryness and its severity with the increased duration of wearing masks in the health care population. About two-thirds of the participants who responded to the survey had dry eye symptoms with the frequency of sometimes on the Likert scale and an increase in the symptoms was seen with an increase in the duration of wearing the mask. The frequency of ocular discomfort was significantly higher in the present study than reported previously.10 However, Chalmers et al.10 reported that clinicians often underestimated the severity of participant’s self-assessment of dry eye symptoms. As face masks are necessary, along with social distancing and hygiene measures, to slow down the spread of COVID-19,2 it is important not to underestimate all symptoms that could bring negative psychological impact within the population from using them.

The majority of studies report a significantly higher prevalence of dry eye disease in women compared to men.11 The results of the present study contrast with the previous study as there was no statistical significance of MADE based on gender distribution.

Although a higher prevalence of dry eyes disease in older people are described in the literatures,12 the worsening of symptoms due to the use of the mask was not correlated with age in this study. The mean population age of our study was 24.69 years which could be the reason for not correlating with age factor. Further study needs to be carried out in different age groups for better understanding of symptoms of MADE with age.

The warming and sweating along with difficulty in breathing was found to be highly associated (odd ratio=1.56) when using cloth masks.13 Moreover, Matusiak et al.13 documented that wearing surgical masks was linked to a significantly lower risk of adverse reactions than cloth masks or respirators (N95 + FFP). This is supported by Roberge et al.14 who postulated that surgical mask use at a low-moderate work rate was not associated with clinically significant physiological impact, but it would be useful to verify if the use of different types of masks may have effects on ocular discomfort. The present study also reports that about two-thirds of the population was using cloth masks. This can be a reason for an increase in the frequency of symptoms with an increase in the duration of wearing a mask.

The present study found that the frequency of symptoms for dry eyes like irritation, watering had a positive correlation with the increased hour of using a mask. Similar findings were noted in the Marinova et al.15 where the parameter like burning, tearing of eyes, dry eye feeling, irritation was reported in a maximum number of regular protective mask user (RPMU). These frequencies were very low in occasional mask wear.

Interestingly, some studies are being conducted to find symptoms for dry eyes in COVID-19- positive patients.16, 17 While these articles suggest dry eye as a complication, we assume that our findings may be partially associated with long-term mask use in these individuals, rather than sequence of COVID-19.

The study highlighted the association of severity and frequency of dry eyes in an individual wearing mask for a long period of time. The finding reflects that the frequencies of the dry eyes along with the severity will increase with the increasing duration of wearing the mask. Moreover, it also suggests that cloth mask is the probable predisposing factor for the increase in dry eye symptoms. Further study can be added considering age factors to associate the severity of dryness.

World Health Organization. Advice on the use of masks in the context of COVID-19. 2020 (accessed 25 Oct 2020)https://www.who.int/emergencies/diseases/novel-coronavirus-2019/advice-for-public/when-and-how-to-use-masks

Ł Matusiak M Szepietowska P Krajewski R Białynicki-Birula JC Szepietowski Inconveniences due to the use of face masks during the COVID-19 pandemic: A survey study of 876 young peopleDermatol Ther2020334e1356710.1111/dth.13567