Purpose: To determine whether patients with Age related macular degeneration (ARMD) benefit from cataract surgery in terms of best corrected visual acuity (BCVA) and to assess impact of surgery on progression of ARMD.

Materials and Methods: A prospective study was carried out of patients with and without ARMD undergoing cataract surgery at our department. Patients were divided into two groups- Group A (cases) with ARMD and Group B (controls) without ARMD and other retinal pathology. BCVA of cases was recorded on day 1, day 14, 1 month and 11/2 month and compared to that of controls.

Result: BCVA significantly improved but markedly less than that experienced by control eyes. No increased incidence in progression to wet form of ARMD.

Conclusion: Cataract surgery is safe in ARMD patients with no evidence of increased complications or rates of disease advancement.

Cataract and AMD share common risk factors, such as smoking and nutrition that could cause them to progress simultaneously. In addition, inflammatory factors have been implicated in the causation of AMD and it is feasible that inflammation occurring after cataract surgery could cause worsening of macular degeneration. Moreover, the replacement of the natural lens with an artificial lens could be associated with increased exposure to light and damaging ultraviolet rays.

A prospective, randomized study was conducted in patients with and without ARMD having visually significant cataract who were presented to or referred to ophthalmology outdoor and underwent planned extracapsular cataract extraction by phacoemulsification with PCIOL implantation method to evaluate functional visual outcome after cataract surgery and compare their outcomes with controls without retinal pathology between June 2016 and October 2017.

A total of 100 eyes of 100 patients undergoing cataract surgery by phacoemulsification with PCIOL implantation were included. A written informed consent with regards to participation in the study was taken from the patients after providing them with a thorough explanation. Preoperatively, all patients underwent a complete ophthalmologic examination.

By randomization patients were divided into two groups:

Group A (Cases): 50 patients with ARMD

Group B (Controls): 50 patients without any retinal pathology.

Patients having following retinal pathologies were excluded from this study:

From June 2016 to October 2017, 118 patients were enrolled in the study out of which 100 completed the study and 18 were lost to follow up. 50 were in group A (cases) and 50 in group B (controls). As shown in Table 1 the total number of patients completing the study in both the groups were equal and therefore both the study arms were comparable with regards to sample size.

Table 2 shows that in both the study groups most of the patients were > 50 years of age.

There was no incidence of choroidal-neovascularization (wet ARMD) in our study as confirmed by OCT. 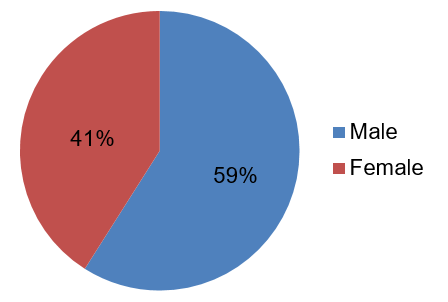 Monestam E & Lundqvist B conducted longitudinal cohort study which concluded that patients with signs of AMD at cataract surgery had a longitudinally worse visual outcome than patients without clinical signs of AMD.5 However, in our study cases have improved BCVA although it is less than that experienced by controls therefore there is no reason to discourage patients with concurrent visually significant cataract and ARMD from having surgery.

Study conducted by Hooper et al concluded that no increased short-term risk of progression of AMD to CNV in high-risk fundi following uncomplicated phacoemulsification surgery was found. A low threshold for performing preoperative imaging in patients with AMD, especially in those with exudative AMD in the fellow eye, to exclude undetected CNV is recommended. Provided there is no CNV, there are distinct benefits of cataract surgery in people with early AMD.6 Dong et al has document that cataract surgery does not increase the risk of ARMD progression.7 Our study mirrored the findings by Hooper and Dong.

Our findings seem to be consistent with an observational study conducted by Lundstorm et al which concluded that subjects with various stages of dry ARMD and cataract improved their self assessed visual function and satisfaction with vision significantly after cataract extraction.8

Our results agree with those of previous studies looking at improvements in BCVA and functional visual improvement. Also, our results give a reference for cataract surgeons and AMD patients to base expectations of both the absolute and relative benefits of undergoing cataract surgery with AMD.

Cataract surgery is safe in AMD patients with no evidence of increased complications or rates of disease advancement (especially conversion to wet ARMD) postoperatively. Cataract surgery on eyes with AMD led to increased visual function; however, increases were significantly less when compared with patients without retinal pathology as in our study.