Adyanthaya and Abhilash B: Comparison of visual acuity measured by ETDRS based smart phone applications I sight pro and Peek acuity versus traditional Snellen's chart visual acuity in children 6-14 years in a tertiary care institute in India

Introduction: Covid-19 pandemic has led to children missing schools due to which eye care screening activities at schools have taken a backseat. To mitigate this home based visual acuity estimation smartphone applications are increasingly being used for the purpose of tele-ophthalmology purposes, although with no validation of the same. We aim to fulfil this lacunae.

Materials and Methods: Current study was a cross sectional analysis on 286 eyes of 148 children aged between 6years to 14years attending our OPD from April 2021 to June 2021, with non-acute ocular symptomatology. Snellen’s distant visual acuity was compared against the visual acuity recorded by smart phone based Isight pro app and Peek acuity smart phone app. Statistical analysis was performed by Bland Altmann analysis by using SPSS version 21 and p<0.05 was taken as the level of significance.

Access to healthcare in the current COVID-19 pandemic times has taken a major hit especially in a developing country like ours, where the health awareness and health education is already lacking, leading to a mole becoming a hill in terms of prevalence of both communicable and non-communicable diseases.1, 2, 3 Due to the pandemic, ocular care has taken a backseat unless it’s deemed as an emergency. A large spectrum of patients with ocular symptoms have suffered in these pandemic times, mainly patients with perennial or seasonal allergic conjunctivitis, vernal kerato-conjunctivitis, chronic dry eye disease, patients with glaucoma, diabetic retinopathy, retinal disorders, refractive errors, amblyopia and many other conditions.3

COVID -19 pandemic has restricted movement of patients for non-emergency ailments, it has also increased their anxiety, apprehension and hesitancy in attending hospitals and clinics to seek eye care. It has caused a loss of normal routine eye screening conducted at schools leading to delayed treatment of refractive errors, allergies and other ocular pathologies leading to increased ocular morbidity among school going children.4

To circumvent this tele-ophthalmology was a shot in the arm which helped mitigate this, as access to eye care was more easier and accessible at the comfort of their home and rooms.5 Although tele-ophthalmology was started as a novel initiative to provide basic eye care for people living in rural or inaccessible parts of the India, due to the pandemic there has been a 257% to 700% increase in tele-ophthalmology calls in the past year or so alone and made accessible to both the remotest places to the most urban centres. With this tremendous increase in the tele-ophthalmology part of consultation it is imperative to have the right equipment and processes to evaluate and analyse and validate our examination systems and protocols to gain maximum information for making a diagnosis.6, 7

One of the most important events or examination protocols followed in any ocular practice is assessment of accurate visual acuity. In clinical practice as of now the gold standard for assessing visual acuity is the Snellen’s chart.8 To assess visual acuity in tele-ophthalmology setting we usually take help of the multitude of available smartphone and mobile apps available on both Apple I store and android platforms. Although proper validation of the visual acuity measured by these apps are still lacking.9, 10 If validated it would provide both the clinician and parents an objective assessment of visual acuity of their wards. This validation would also provide the necessary trust for the clinician to take appropriate management measures based on the V/A measured by the home testing apps with less hesitancy.10

The current study was a cross-sectional study conducted on 286 eyes of 148 children attending our OPD from Oct 2020 to June 2021 at a tertiary institute in India. The study was conducted after due clearance from the institutional ethics committee. Informed consent was taken from the children’s parents/ their guardian. Best corrected distance visual acuity of all children in the age group of 6-14 years was assessed by Snellen’s chart, ISight Pro mobile application on Apple store and by Peek acuity app available on android platform. The current two applications Isight Pro and Peek acuity were selected based on the potential ability to assess visual acuity at home by parents and clinicians alike and further extrapolate the data to suggest or disapprove of the above mentioned ways to assess visual acuity.

All children aged between 6-14 years with non-acute conditions attending our OPD were included in the study. Whereas children <6yrs and > 14yrs with acute conditions like conjunctivitis corneal ulcer, stye, ocular trauma, internal hardeolum, cataract and corneal pathologies like, corneal tear, corneal scar and dystrophies were excluded from the study. Also children with prior ocular surgeries were not included in the study.

Both the child and their parents/ guardian were given instructions and instruction brochure containing information about the appropriate distance, appropriate occlusion of one eye and lighting prerequisite needed for V/A assessment was given to understand how to measure visual acuity by apps. If any doubts they were free to ask the resident about the same.

Best corrected visual acuity was measured by using Optotype based V/A chart - Snellen’s chart at a distance of 6 meters first, followed by V/A assessment by apps Isight Pro(Apple)- Iphone 7 in which the subject is made to read the optotypes at adistance of 3.0 meters and Peek acuity(Android)- Mi Note 8 pro, wherein the subject is made to read the optotypes at a distance of 3.0meters. Both Isight pro and Peek Acuity apps were based on ETDRS chart. We compared the ETDRS apps based visual acuity with Snellen’s chart visual acuity as it was a more cost effective variant than the ETDRS chart which costs significantly more. All the V/A values were noted and converted into logMAR for easy statistical analysis. Each child was asked to repeat the test three times to assess for reliability. 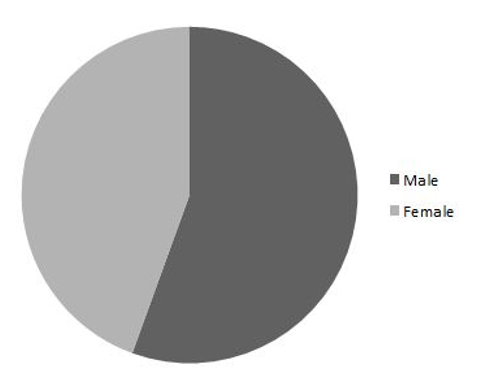 Bland Altmann analysis, the mean differences between the smartphone-based test Isight pro and the Snellen’s chart 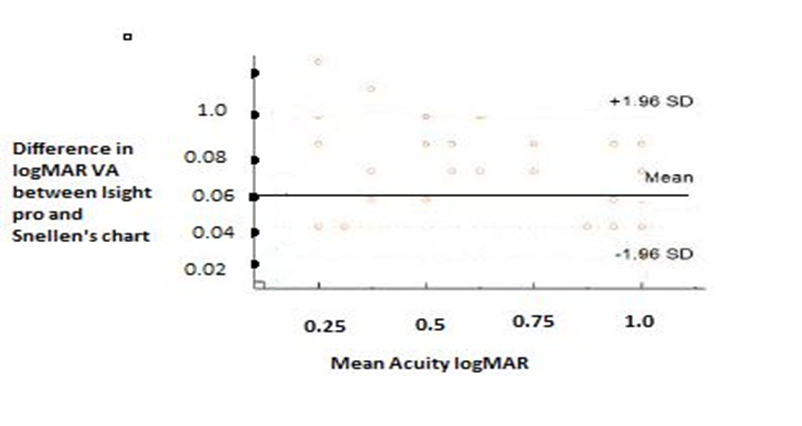 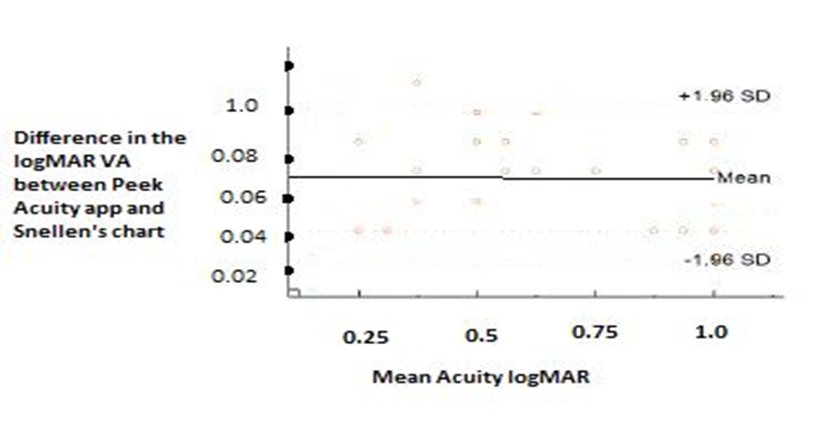 Time taken to test visual acuity by Snellen’s chart was approximately 118.2±21.38 seconds, whereas with Isight pro and Peek acuity smart phone apps the time for testing was approximately 92±15.88 seconds and 94.03±19.73 seconds respectively. P<0.05 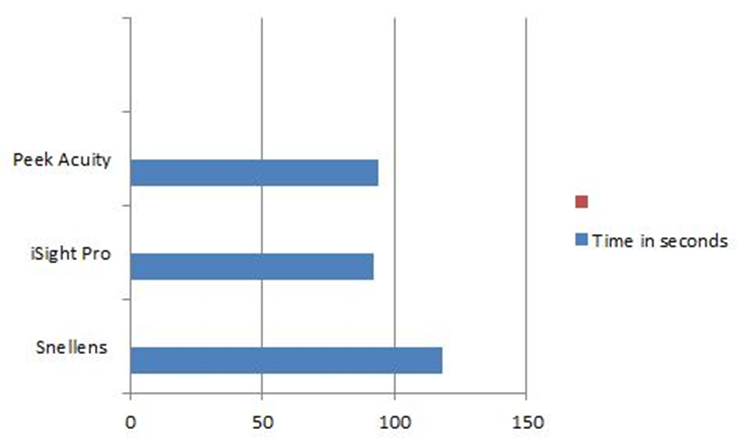 A formal assessment of visual system begins with the estimation of visual acuity, usually by a Snellen’s chart. Although the standard chart for measurement of VA is the logMAR ETDRS chart, it is expensive and hence Snellen’s chart has been used as an effective alternative. From the observations of our current study the visual acuity measured by ETDRS based smart phone apps in children aged between 6-14 years was reliable and repeatable when compared with that of the snellens’ acuity measured by Snellen’s chart. Similar findings although in older population was observed in a study conducted by Brady CJ et al in Kenya.12

On analysis of iSight Pro and Peek Acuity app visual acuity versus Snellen’s distant acuity there was a negligible mean difference between the two readings 0.063 (95% CI, 0.041–0.083) and 0.071 (95%CI,0.05–0.92) logMAR indicating that both the app based visual acuity measurement systems were comparable with Snellens acuity. The findings of our study was comparable to the study conducted by Bastawrous et al7, 12 in 2015 who validated the use of smart phone based visual acuity apps for use in community ophthalmic practice.

Brady et al 12 study noted a mean time of measuring visual acuity was on average 77sec to 82 seconds but in our current study it was about on average 114.3±6.2sec seconds in the Snellen’s acuity group, but whereas in the ISight Pro and Peek Acuity groups it was 98.1±5.41 seconds and 94.72±4.32 seconds. This was probably due to the children trying to understand the examination and also probably due to increased exposure of smart phone devices from an early age due to which they could grasp the Smart phone based visual acuity examination pattern much faster than the Snellen’s acuity examination pattern. 12, 13

COVID-19 pandemic has caused a large populace of children missing schools and thereby also missing some of the added screening programs to detect eye health in children by school teachers. During times like these it is imperative that parents and their guardians be able to assess and analyse visual acuity which forms the very basis of all eye examinations. From our study we conclude that the app based visual acuity apps Isight Pro and Peek acuity provide reliable and repeatable visual acuity as compared with that of Snellen’s acuity. It is also an effective tool to provide health education in community ophthalmology settings. From a Ophthalmologists’ perspective it provides accurate and dependable VA results and can be used as a basis for treatment referrals and management especially in the COVID-19 pandemic era where teleophthalmology services has surged like never before.

Lacunae of the Study

A much larger sample size is needed and a home based testing conducted by parents would provide a better representation of the study than the current study.