Rhinoorbital mucormycosis in COVID-19 pandemic: presentation and course of disease: An observational study

Purpose: During the second wave of covid 19[SARS- Co V-2] pandemic, there is a sudden increase in number of mucormycosis infection cases in India. The present study is an attempt to understand the presentation, course and outcome of rhinoorbital mucormycosis in a group of patients who reported to Ophtalmology and Otorhinolaryngology department of our Govt. District Hospital (secondary referral centre) for enhancing measures for prevention and management.

Materials and Methods: Patients who reported to our Government district hospital with signs or symptoms suggestive of rhino orbital mucormycosis during May-June 2021 were included in the study with consent of ethical committee, patients and patient’s relatives. Total 17 cases were reported and followed. Clinical examination was done for all the patients. History of the presenting complaints and underlying illness with COVID -19 was elicited. Underlying comorbid status was recorded. Patients were followed as all of them were referred to higher centre for further management as per the guidelines issued by directorate medical and health services, rajasthan, Jaipur.

The rapidly growing saprophytic fungi release a large number of spores in the environment. These sporangiospores are commonly inhaled by the host, in hosts with normal immune status, the ciliary system directs the spores towards the pharynx, thereby eliminating them via the GI system. The spores might also get colonized in the oral mucosa, nose, throat and paranasal sinuses. Mucorales do not cause disease in host with normal immune system where phagocytosis could effectively contain the invasion and infection. When phagocytosis is impaired due to immune deficiency, the germination of spores into hyphae with resultant angioinvasion is initiated. The initial site of infection in Rhinoorbital cerebral mucormycosis is the nasal turbinates. An acute episode of sinusitis progresses into pan sinus involvement within a few days with contiguous spread to orbit, palate and brain resulting in severe tissue ischemia and necrosis due to the angioinvasive nature of the fungi. This mechanism is facilitated by high amount of Iron and Glucose in serum.7, 8, 9, 10

The presenting symptoms of rhino orbital cerebral mucormycosis include headache, facial pain, eye pain, facial numbness, diplopia with varying degrees of ophthalmoplegia, ptosis, proptosis, vision loss with and without papilloedema, nasal discharge, epistaxis and loosening of teeth. Black discoloration of skin and mucosa along with ulceration and discharge from nose and palatal mucosa are characteristic of mucormycosis.11 CT Scan can demonstrate the nature and extent of soft tissue abnormalities in the sinuses, orbits and brain. Mucosal thickening of sinuses along with opacification is often noted. MRI is more helpful over the CT in clearly delineating vascular invasion, intracranial spread and also in the assessment of early perineural spread. A T2 weighted MRI with fat saturation sequences or short T1 inversion recovery is ideal. Definite diagnosis is arrived at by tissue biopsy.6

Rhino orbital mucormycosis is an medical and surgical emergency. Amphotericin B has become the gold standard for the systemic treatment. Liposomal amphotericin B is the first choice of treatment as it crosses the blood brain barrier more effectively. Surgical debridement of local necrotic tissue (paranasal sinuses and orbital exentration) are done to reduce fungal load.6

As the patients reported in our study were mostly from rural are, the awareness about the disease and data availability was limited. Therefore our study largely represents the presentation and course of disease among rural population.

We recruited a cluster of 17 patients with signs or symptoms suggestive of rhino-orbital mucormycosis who reported to Ophthalmology and Otorhinolaryngology departments of our Government district hospital after obtaining consent from patients. Their demographic profile was noted. Clinical examination was done. Spo2, blood sugar, treatment history with O2 and steroids was recorded. CT-PNS, orbit and head were done. All the patients were referred to tertiary level centres. Patients were followed for their management and outcome. At tertiary level MRI of paranasal sinuses, orbits and brain (plain and contrast) were obtained. Endoscopic tissue biopsy was done for final diagnosis. Endoscopic sinus debridement or orbital exentration were done as per the requirement. Intravenous liposomal amphotericin B was used for the medical management.

Case no. 1,2,3,4,5,10,11,12 and 17 total 9 developed symptoms during their treatment for COVID in hospital. All these patients were on intravenous steroids and O2. 7 out of these 9 patients had spo2 below 90%. All these 7 patients died within 7 days from the onset of symptoms of mucormycosis. One patient out of these 9 admitted patients had spo2 97%, had orbital exentration done and was on Amphotericin B but expired during 3rd week of treatment. Remaining one patient had orbital exentration and was on Amphotericin B till the last follow up.

8 patients presented in OPD, they did not have history of treatment with O2. 6 out of these 8 patients were on oral steroids. 5 out of these 8 OPD patients had orbital cellulitis at presentation. 4 of these 5 died within 1 week while on treatment for mucormycosis. One out of these 8 patients had acute presentation with right orbital cellulitis and nasal bleeding, blood sugar was 240mg/dl and spo2 was 95%. MRI was positive for rhinoorbital mucormycosis. He had no history of any type of illness or treatment in the past. He died before having any treatment for mucormycosis. Duration of his onset of symptoms and death was only 4 days. RT-PCR done after death was negative. Another one patient was 34 yr male with vomiting, diarrhea and bilateral conjunctival congestion at presentation. CT-PNS showed sphenoidal sinusitis. His blood sugar level was 123 mg/dl and spo2 was 97%. He was immediately referred; was diagnosed to have rhino orbital mucormycosis and was managed accordingly with Intravenous Amphotericin B. This patient survived and improved with timely intervention. 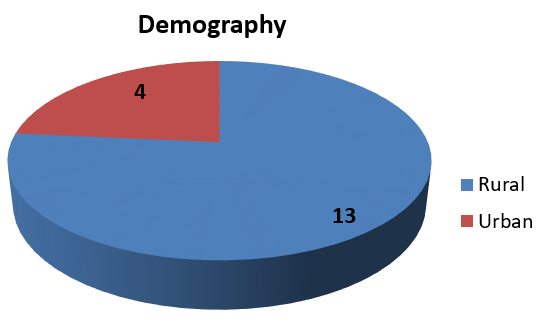 Mean age of presentation was 58.88 years

9 /17 (52.9%) of patients were already admitted in COVID wards and developed mucormycosis during treatment of COVID. Other 8/17 (47.05%) cases, reported in OPD and never had treatment with inhalational O2. Therefore role of inhalational O2 in causing rhinoorbital mucormycosis remains doubtful in our study.

6 patients had RT-PCR report negative but developed symptoms and signs of Rhino orbital mucormycosis in due course. 2 patients did not get RT- PCR test done. It shows that patients can develop associated complications of COVID 19 even if they are reported negative in RT- PCR. 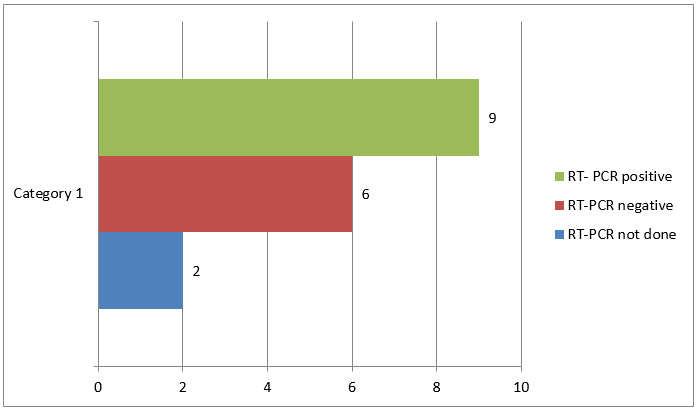 12 enrolled patients (12/17 i.e 70.5%) died and 5 patients survived till the last follow up in our study. This denotes a high death rate in mucormycosis patients. Out of 12 patients who died 10 (90.9%) had orbital cellulitis at presentation. Out of these 10 cases 2 cases presented in OPD; were immediately refered to higher centre but died before receiving any treatment for mucormycosis. 2 cases out of these 10 had orbital exentration followed by liposomal amphotericin B, 5 had received amphotericin B for 2-3 days and remaining 1 died at home within 7 days without receiving any treatment. This shows poor prognosis of patients once orbital cellulitis sets in.

4 patients who were alive and had improved after referral to higher centre had only initial symptoms and signs suggestive of Rhino orbital mucormycosis at presentation; were immediately referrd and were treated accordingly. This underlies the importance of early diagnosis and treatment.

The early flag sign and symptoms reported in our study were:

Any patient with these symptoms must have CT PNS done ; if CT PNS shows mucosal thickening in any of the paranasal sinuses immediate further management must be done.

Rhinoorbital mucormycosis showed aute onset and rapid progression in all the patients. High index of suspicion is necessary for early diagnosis and treatment to avoid high mortality and morbidity as it showed acute onset and rapid progression even in patients with mild symptoms of COVID. Prevention of COVID infection especially in patients with Diabetes remains the only way to avoid associated mortality, morbidity, social and economic upheavals. Wide social awareness about the preventive measures, early symptoms and available management is of paramount importance especially in rural and remote areas of India.

We would like to acknowledge support of Dr. Anju Kochar, SP Medical College and Hospital, Bikaner for providing follow up details of our patients.