Results: At 12 weeks post-operative, mean logMAR BCVA was 0.01±0.02 for MSICS group and 0±0.02 for Phacoemulsification group. Macular thickness was not statistically significant (p=0.342) between MSICS group (219.19±17.88µm) and Phacoemlusification group (215.61±16.21µm), at the end of 12 weeks post-operative. Clinically significant macular oedema was not diagnosed in any of the patients at the follow-ups.

Conclusion: Both procedures achieved good post-operative Best Corrected visual acuity without significant differences in BCVA between both the groups at the end of 12 weeks.

One of the leading causes of preventable blindness is cataract. It is a disease that significantly influences the quality of life of patients. The world health organization (WHO) estimates that at least 20 million people worldwide are blind because of cataract, resulting in 51% of blindness globally. Maximum number of cases of blindness caused by cataract are seen in developing countries.1

Due to the growing population and increasing life span, the number of surgeries being performed globally has to be increased three-fold, to keep-up with the increasing requirement, as improved visual status post-cataract surgery correlates with reduced morbidity and improved quality of life.2

One of the many causes for poor vision post-cataract surgery is cystoid macular edema (CME), also known as Irvine-Gass syndrome.7 However, with the advent of surgeries like MSICS and phacoemulsification, CME incidence has come down.8

As the incision size is larger and manipulation of iris is more, the CME incidence is reported to be higher in MSICS. Sub-clinical edema and even Clinical CME after uneventful surgery of cataract has been reported in both MSICS and Phacoemulsification, with greater risk after MSICS. This edema, however, did not affect the post-operative visual outcome in due course of time in majority of cases.9, 10

Prospective clinical study was done on 160 eyes of 160 patients having uncomplicated immature senile cataract (IMSC), aged 40-70yrs, with 80 patients each randomised into two groups, by simple 1:1 randomization. Group A underwent manual small incision cataract surgery (MSICS) & group B underwent phacoemulsification. The study was conducted from 1st October 2019 to 31st September 2020, at Rohilkhand Medical College and Hospital, Bareilly, Uttar Pradesh, India, and was approved by its review board and ethical committee.

Relevant history was noted on the study Proforma, including Onset and progression of diminution of vision (DOV), any antecedent history of trauma, recurrent redness, family history of early onset cataract, systemic history, any previous ocular surgery.

Image acquisition: patient’s pupils were dilated before image acquisition every time using a combination mydriatic eye drop (tropicamide 5% + phenylephrine 0.8%). SD-OCT was used to acquire CMT, using the macular thickness map protocol. These scans are averaged by the OCT software using an automated computerized algorithm and the result is presented with comparison to the normative database.

Pre-operatively, the eye to be operated was dilated using a combination mydriatic eye drop (Tropicamide 5% + Phenylephrine 0.8%) and additionally eye drops Flurbinofen 0.03% was instilled for sustenance of dilatated pupils. Local anaesthesia via peribulbar route was given through the lower eyelid at lateral 1/3rd and medial 2/3rd junction, adjacent to orbital margin.

All surgeries were done by the same surgeon. For group A, superior rectus bridle suture was taken, peritomy was done from 10-2 o’clock & sclera exposed. After cauterizing any bleeders, frown incision was made on the sclera, followed by sclero-corneal tunnel formation and side-port entry at 10 o’clock. For group B, side port was entry was made at 10 & 1 o’ clock position. Trypan blue dye was injected and washed, followed by viscosurgical devices to maintain depth of anterior chamber. Capsulorrhexis was done followed by hydrodissection and hydrodelineation. In MSICS, entry into anterior chamber was made by keratome, nucleus was prolapsed into the anterior chamber & removed, while in group B, Phacoemulsification was done using AMO Sovereign Compact (Whitestar Cold Phaco, USA) and nucleus was removed after emulsifying it. Irrigation and aspiration of cortical matter was done.

Remaining viscoelastic material was removed using Simco’s cannula. In the end sub-conjunctival injection Dexamethasone and Gentamycin combination was given in the operated eye in every case. After instilling topical broad-spectrum antibiotic eye drops, eyes were pad-patched.

Post-operative follow-up was done on day 1 & 7, and at the end of 3rd, 6th and 12th weeks in terms of Visual acuity and CMT. Post-operative analysis was done at 12th week post-op.

The presentation of the Categorical variables was done in the form of number and percentage (%) while, the quantitative data were presented as the mean ± SD, and median with 25th and 75th percentiles (interquartile range). Comparison of the variables which were quantitative in nature were analysed using Independent t test (for two groups). Paired t test was used for comparison across follow up. The final analysis was done with the use of Statistical Package for Social Sciences (SPSS) software, IBM manufacturer, Chicago, USA, version 23.0. For statistical significance, p value of less than 0.05 was considered statistically significant.

In the study, age of the patients ranged from 40-70 years in both groups. The mean age in years was 56.65 ± 8.10 in MSICS group, while 55.82 ± 7.50 in phacoemulsification group. The difference in these two groups was not significant statistically for age distribution (p value=0.505) as it is depicted in Figure 1. 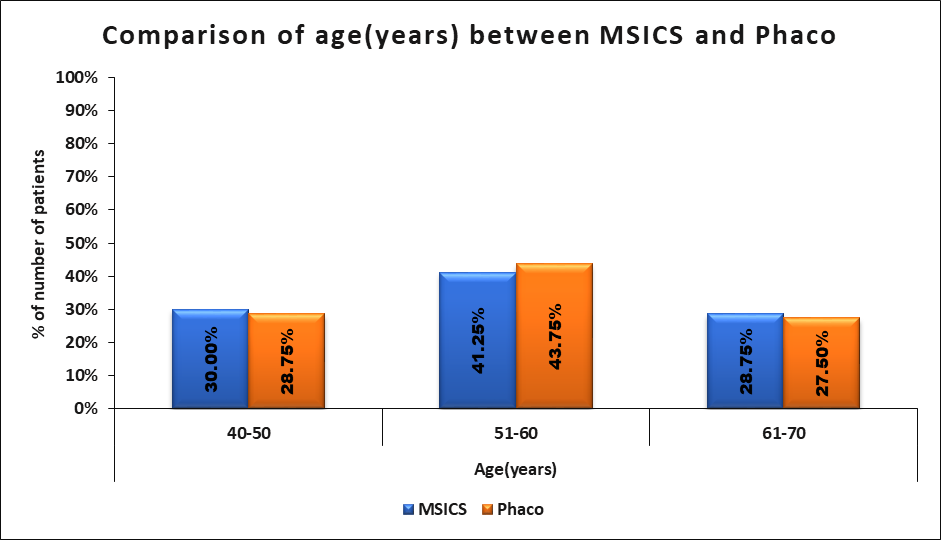 There were 40 males and 40 females (i.e. 50% males and 50% females) in both the groups. The difference for gender distribution between the two groups was statistically insignificant (p value=1) as depicted in Figure 2.

Comparison of gender between MSICS and Phacoemulsification 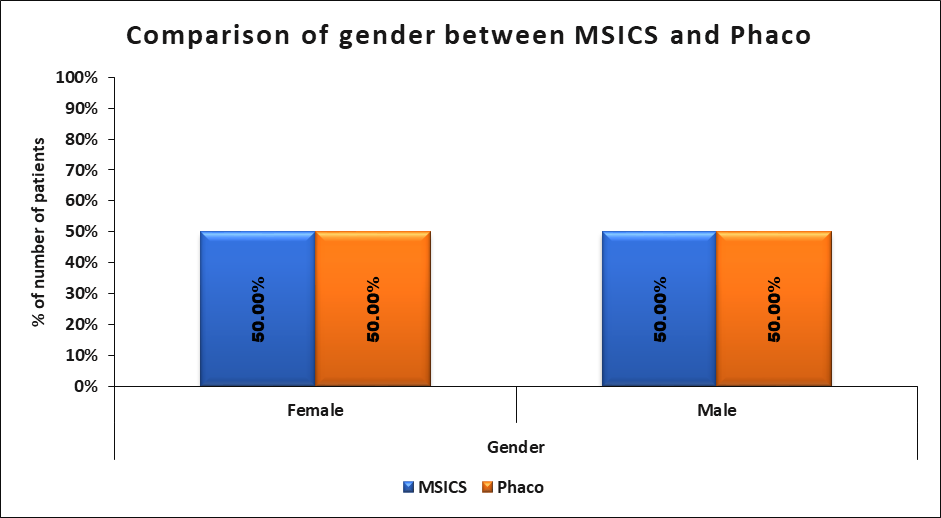 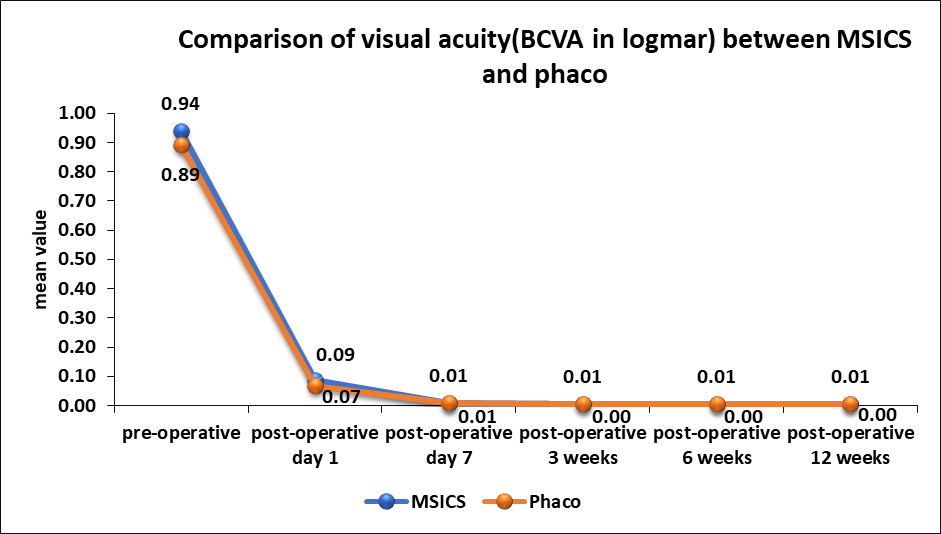 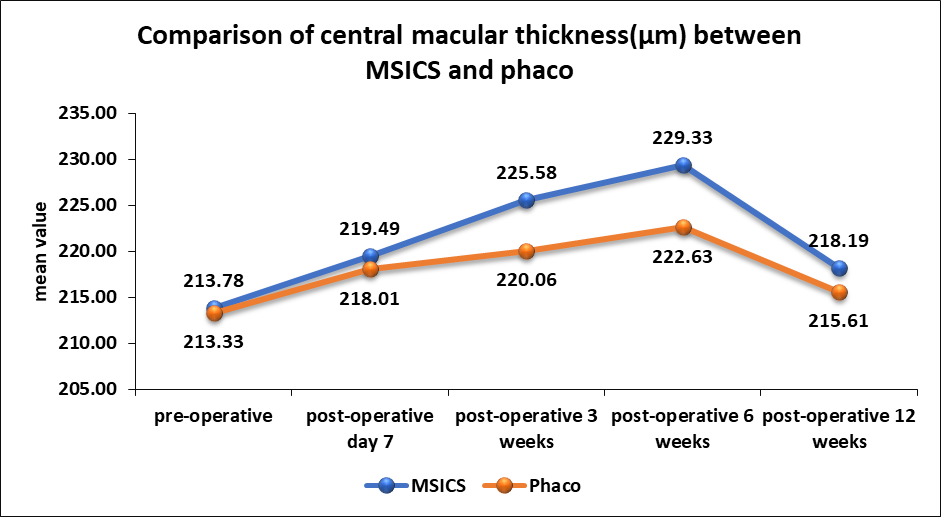 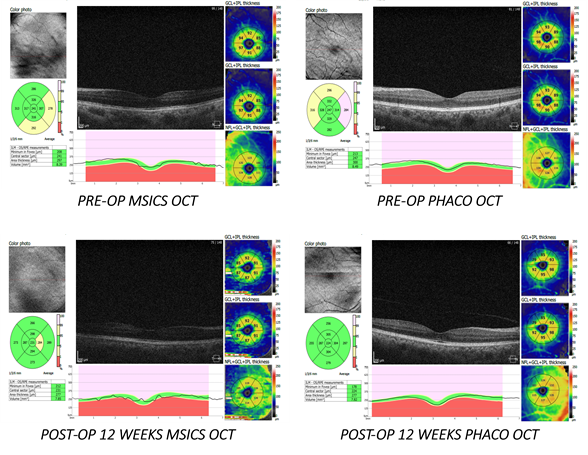 Following a cataract surgery, among complications, central macular oedema specially is a significant cause of decreased vision post-operatively. With the advancements in surgical techniques, presently it is possible to achieve faster surgeries with lesser complication rates, conventional ECCE giving lesser complications than ICCE due to the presence of an intact posterior capsule. These complications have further reduced with the advent of modern techniques such as MSICS and phacoemulsification surgeries.9, 11

Mean age of patients was 56.65±8.10 years & 55.82±7.5 years in MSICS & Phaco group respectively in this study. This was comparable to study by Khanna et al,12 which included patients with mean age group of 57.4 years & 55.1 years in MSICS & phacoemulsification group. In study done by Venkatesh et al 13 mean age was 56.6 ± 9.5 in MSICS group while 56 ± 9.3 in phaco group. This age group was considered as there is maximum prevalence of uncomplicated senile immature cataract in this age group of patients and to avoid any bias in parameters as compared to younger age group.

In our study, there were 80 females (50%) and 80 (50%) males with a ratio of 1:1 in each group individually also. The distribution of gender was comparable between both the groups thus showing no gender predilection (p value=1). Other studies showed similar results. Male:Female ratio was 1:1 in MSICS and phaco group respectively in the study by Khanna et al,12 and 1: 1.3 in study by Venkatesh et al.13

The mean BCVA at post-op 12 weeks was 0.01 ± 0.02 & 0 ± 0.02 in group A & B respectively. The difference was not significant (p=0.701). Visual acuity was significantly improved from pre-operative to post-operative 3 weeks with no change from post-operative 3 weeks till post-operative 12 weeks. The results are comparable to the study done by Ruit et al.4 They conducted a prospective study comparing the efficacy as well as visual results of the MSICS vs phacoemulsification in Nepal and found that at six months, 98% of the patients had a BCVA of 20/60 or better by six months in both MSICS and phacoemulsification group. Another study by Venkatesh et al13 reviewed the records of approximately 600 patients. At 6 weeks, BCVA was 20/60 or better in 99% in the phacoemulsification surgery group and 98.0% in the manual SICS group

Despite a higher theoretical risk of increase in postoperative inflammation after MSICS, there wasn’t any evidence of CME, neither clinically nor on OCT. Even so, chances of sub-clinical rise in CSMT was higher after MSICS as compared to phacoemulsification which could be attributed to more tissue trauma and iris manipulation associated with MSICS. Trauma during surgery to iris, ciliary body and the lens epithelial cells is known to release phospholipids, and thereby prostaglandins and other inflammatory mediators. These inflammatory mediators diffuse through the vitreous and disrupt the BRB to cause pooling of serum in retina causing macular edema.14, 15

Limitations in our study were shorter sample size and lesser period of follow up. Also, this study did not include very dense or mature cataracts, limiting information related to impact of associated variables on CME such as larger incision and more surgical manipulation in MSICS and higher phaco power and duration in Phacoemulsification surgery. A study with larger sample size with longer follow-up and denser cataracts may be required to compare the parameters.

There is a sub-clinical, transient rise in CMT, after surgery in both groups with respect to pre-operative value, and this is significantly higher for the MSICS group than phacoemulsification group in first 6 weeks postoperatively. However, there is not much significant difference in CMT in the two groups on the final follow up at 12 weeks. This has minimal impact on postoperative best corrected visual acuity at 12 weeks post-op. Both procedures individually, achieve good post-operative Best Corrected visual acuity post-operatively, without significant differences in BCVA between the two groups at the end of 12 weeks post-op. Hence, MSICS can be considered as a faster, cheaper alternative to phacoemulsification giving good post-operative BCVA, especially in high volume, developing countries.