A rare association of retinal capillaritis with Klebsiella liver abscess

A 32-year-old male, newly detected diabetic on insulin, admitted with fever and chills of two weeks duration and diagnosed as liver abscess, was referred to ophthalmology department with painless blurring of vision in both eyes of one day duration. His best corrected visual acuity at presentation was 20/80 and 20/40 in right and left eyes respectively. Anterior segment was normal in both eyes with no cells or flare. Dilated fundus showed clear media with normal optic disc in both eyes. There were multiple cotton wool spots and Roth spots at the macula (Figure 1A & B). Optical coherence tomography (OCT) showed cystoid macular edema in both eyes (Figure 1 C & D). Fundus fluorescein angiography (FFA) revealed diffuse capillary leakage at macula and disc leakage in both eyes (Figure 1 E & F). Hence, the diagnosis of bilateral macular capillaritis with cystoid macular edema was made. 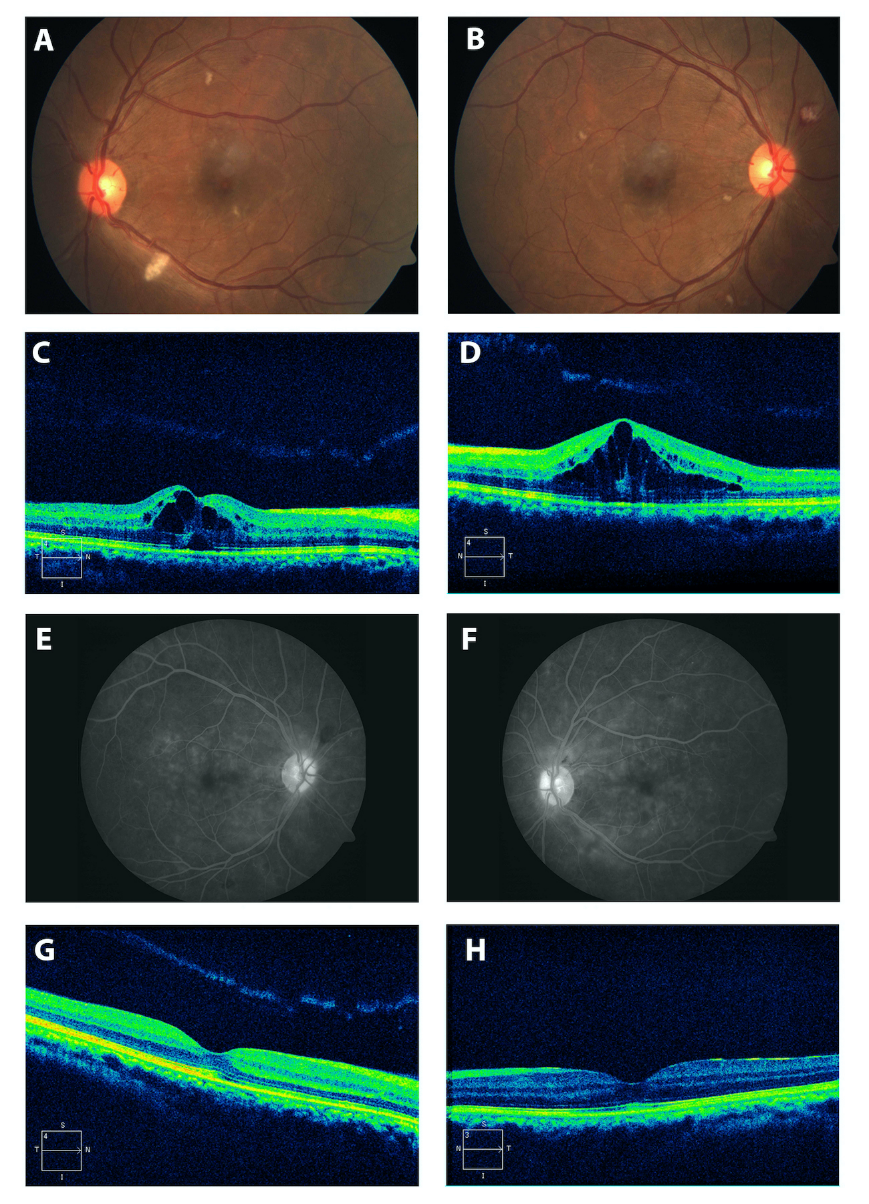 He was empirically started on intravenous metronidazole and piperacillin-tazobactam by the medical team. Pigtail catheter insertion was performed under ultrasound guidance and pus culture grew Klebsiella pneumoniae which was sensitive to the administered antibiotics. Treatment with anti-inflammatory agents for his retinal capillaritis was considered but withheld in view of his systemic condition after discussion with the physician. After source control and appropriate intravenous antibiotics for one week, his visual acuity improved to 20/20 in both eyes. Repeat OCT done showed complete resolution of the cystoid macular edema. Serial ultrasonographic examination of the abdomen showed reducing size of liver abscess with complete resolution after two months. Fundus showed resolution of cotton wool spots and Roths spots at 2 months.

Retinal vasculitis is a descriptive term for evidence of ocular inflammation and retinal vascular changes characterised by perivascular sheathing or vascular leakage or occlusion on fluorescein angiogram.1 It is a sight-threatening condition which can occur in the presence of ocular infection or in the context of systemic infective or inflammatory disease like sarcoidosis, systemic lupus erythematosis, Wegener’s granulomatosis and Behcet’s disease or as part of an ocular inflammatory condition, most commonly intermediate uveitis and viral retinitis.2

Retinal vasculitis represents small vessel inflammation involving the arterioles, capillaries, and post capillary venules, either singly or in various combinations. Retinal capillaritis is characterised by diffuse capillary leakage on fundus fluorescein angiogram without significant funduschanges.3 Inflammation of the capillaries at the macula and around the optic disc causes cystoid macular edema.4

Post fever retinitis and vasculitis after infections like dengue, coxsackie, malaria, enteric fever and abdominal abscess with pneumococcal pneumonia has been reported.5, 6, 7 This usually occurs between 2 and 4 weeks after the fever in immunocompetent patients, irrespective of etiology caused by either bacteria, viruses, or protozoa.8 Available literature shows that the presentation of this condition several days to weeks after a systemic illness has an immunological basis.7, 8

Mild cases may resolve spontaneously without treatment but severe cases may require corticosteroids and other immunosuppressive agents.9 Our patient presented with bilateral retinal capillaritis with background of Klebsiella liver abscess which resolved spontaneously post treatment of the abscess with systemic antibiotics and drainage. The occurrence of the vasculitis two weeks after fever suggest an immunological cause in this case.

This case report demonstrates that Klebsiella liver abscess can cause retinal vasculitis with macular edema. Although sight threatening, it can resolve spontaneously with treatment of infection alone without specific anti-inflammatory therapy.