Moxifloxacin is a broad spectrum fourth-generation fluoroquinolone. It is being effectively used by Ophthalmologists to treat various ocular infections. We report a rare case of moxifloxacin induced keratopathy post cataract surgery.

A 58-year-old male presented to our ophthalmology OPD with complaints of defective vision and progressive whitish discoloration in left eye for 2 weeks duration increasing in severity over 3 days. Defective vision was not associated with pain or redness. No other significant ocular complaints. Patient underwent cataract surgery in his left eye 4 weeks back. On post-operative Day 3, his vision in the left eye was 6/9 and anterior segment examination was normal. The patient lost follow up after 1st post op review. He was using topical dexamethasone – moxifloxacin combination eye drops 2 hourly for 1month duration.

On examination, right eye anterior segment was within normal limits. Left eye vision was HM+. Cornea showed total epithelial erosion, Salt like gritty white stromal deposits and stain was positive (Figure 1, Figure 2). Corneal sensation was intact. Rest of the details was not visualized. Therapeutic scrapping was tried but was unsuccessful. Fundus could not be visualized due to hazy view. B-Scan was done and was normal. 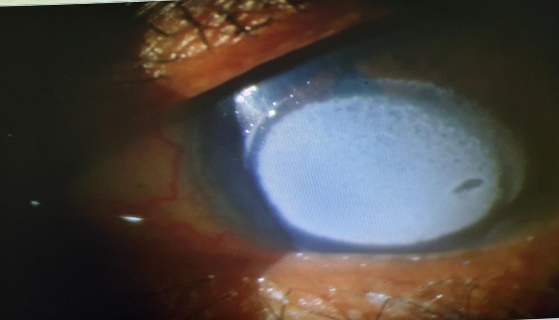 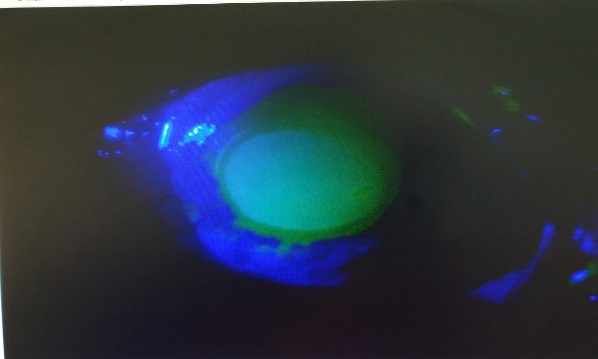 Clinical diagnosis of drug (moxifloxacin) induced keratopathy was made.

The patient was advised to discontinue moxifloxacin eye drops and was started on lubricants and tobramycin eye drops. At 2 months follow up it was status quo. The patient underwent Deep Anterior Lamellar Keratoplasty and is on follow up.

Moxifloxacin is a fluoroquinolone which is widely used by Ophthalmologists for treatment of various ocular infections. Its main function is inhibiting DNA gyrase, a type II topoisomerase, and topoisomerase IV enzymes which is required for the separation of bacterial DNA, leading to inhibition of cell replication. Its safety and penetration have been studied by Solomon et al.1 Few cases of fluoroquinolone induced toxicity has been reported.2, 3 But only very few cases of Moxifloxacin induced corneal toxicity has been reported in literature till date.4 Common Side effects following fluoroquinolone use are dry eye, conjunctivitis, irritation and watering all of which were transient and mild.5 Corneal deposits following topical medications is not uncommon. It usually occurs in the corneal epithelium, but they may also occur in the subepithelial or in the anterior stromal layer.

Corneal deposits following moxifloxacin 0.5% eye drops was first reported by Abdulaziz in a 26-year-old male who underwent unilateral corneal cross-linking for keratoconus.6 There was complete resolution of the deposits after cessation of moxifloxacin.

Another two such cases of severe moxifloxacin induced corneal toxicity was reported by Walter. In both his patients persistent sterile corneal ulcer was treated with moxifloxacin which worsened after intense topical moxifloxacin, but the ulcer completely resolved after change in therapy to gatifloxacin and corticosteroids.7 In our case there was no resolution of the deposits which can be due to prolonged and hourly use of the medication.

Few other studies suggest that the mechanism of toxicity of moxifloxacin on cornea can be due to epithelial degradation, inhibition of collagen IV synthesis which in turn damages the Descemet's membrane and breakdown of tight junctions of the corneal epithelium.

In conclusion, patients started on topical drugs should be on close follow up especially antibiotics like fluoroquinolones. Every ophthalmologist should be aware of the rare ocular toxicity of moxifloxacin. Early recognition of these deposits and cessation of the drug might resolve the deposits..