Shah, Choudhary, and Mashru: A prospective observational study for the safety of Nd-YAG Laster posterior capsulotomy procedure in patients of Posterior Capsular Opacification (PCO) at the ophthalmology outpatient department of a tertiary care teaching hospital in western India

Context: Nd YAG laser is preferred method to manage thickened posterior capsule because it is an easy, non-invasive and an OPD basis procedure considering the comfort of the patients.

Aims: The present study was carried out with objectives to evaluate the safety profile of Nd-YAG Laser Capsulotomy mainly in terms of rise in intraocular pressure (IOP) and other intra as well as post-operative complications.

Settings and Design: This prospective observational study was carried out with prior Institutional Ethics Committee (IEC) approval and written informed consent from the participants at Ophthalmology Outpatients Department (OPD) of a tertiary care teaching hospital of western India, for the duration of two years from Oct’2015 to Sept’2017.

Materials and Methods: A detailed ocular, systemic, family history was taken of all the enrolled patients with pre- and post-procedure evaluation of IOP by Goldman’s Applanation Tonometry, Slit lamp examination and Fundus examination by direct and indirect ophthalmoscopy. Capsulotomy was done using VISULAS YAG III laser of Zeiss company.

Statistical analysis used: The data was entered and tabulated in Microsoft Excel 2007 and analyzed. Data was analyzed by frequency distribution. The ‘p’ value was determined to finally evaluate and P <0.05 was considered as statistically significant.

Conclusions: Nd-YAG laser capsulotomy is an easy, practical modality to treat posterior capsular opacities, but is not a completely innocuous procedure.

Key Messages: Nd-YAG laser capsulotomy is an easy, practical modality to treat posterior capsular opacities, but is not a completely innocuous procedure. Due precautions should be taken in pre- and post-procedural stages including medications, thorough counselling, proper focusing and steady fixation of the patients to minimise the complication.

The recognition that radiant energy of the sun could damage the human eye was a first step in the development of ocular phototherapy. The modern history of photocoagulation began with the work of Gerd Meyer-Schwikerath, a young ophthalmologist at the University of Hamburg, who used, in the early days of research, the sun as the light source for photocoagulation.2 With the subsequent developments in the laser technology, the introduction of Nd :YAG laser in the Q-switched and mode-locked configuration has introduced a new dimension in laser therapy in ophthalmology whereby transparent tissues such as the anterior and the posterior lens capsules or transparent membranes in the vitreous can be cut by extremely short burst of laser energy.3

Incidence & management of intra procedural &post procedural complications is very important part of the study as it concentrates on the potential factors for the poor visual prognosis of this very safe and effective procedure. The intra procedural complications are common but in the hands of skilled and experienced surgeon are very rare and also have very less binding on the final visual outcome. As far as late complications are concerned, they need to be anticipated in particular set of patients for prompt and thorough management and if possible, prevention of the same. e.g. increased intraocular pressure, cystoid macular edema and retinal detachment.

Our study was carried out with an objective to evaluate the rise in intraocular pressure (IOP) as well as other intra as well as post-operative complications after Posterior Capsulotomy by Nd-YAG Laser in Patients of Posterior Capsular Opacification (PCO) Ophthalmology OPD of GMERS Medical College and Hospital, Gandhinagar, Gujarat. The study was of two years duration from October 2015 to September 2017.

With prior approval from Institutional Ethics Committee (IEC), after obtaining written informed consent from the patients, who were aged above 18 years and of either gender having history of more than 6 months of previous cataract surgery and current Intraocular Pressure (IOP) of <21 mm Hg with significant PCO were included in the study. Patients unlikely to be benefited due to some co-morbidities like Corneal or Vitreous Opacities, Retinal Vision Loss, Uveitis, Pseudo-Exfoliation, Glaucoma or it’s suspicion and Ocular Hypertension or history of previous intra-ocular surgery other than cataract were excluded from the study. Patients below the age of 18 years, unable to fixate adequately for the procedure or not willing to participate in study were considered ineligible.

A thorough ocular, systemic and family history was taken of all the enrolled patients including the records of cataract surgery with all relevant details regarding surgery type as well as pre- and post-operative details. Pre-laser IOP were recorded by Goldman’s Applanation Tonometry after applying Paracaine (0.5%) eye drops with keeping the base reading of tonometer at 10 mmHg and staining the eye with Fluorescein strip (fluorescein sodium I.P. 1mg). Pre-Laser Fundus and Slit Lamp examination was done after dilating the pupil with Tropicamide 0.8% + Phenylephrine 5.0% eye drops. Fundus was evaluated using Direct Ophthalmoscopy 90D/78D lens as well as Indirect Ophthalmoscopy. The same evaluation was followed immediately post-laser within 1 hour, 1st day post-laser, at 1 week, at 1 month.

The capsulotomy was done using Visulas Yag III laser of Zeiss, Germany in dark room for better visualization of the opacification. Patients were positioned properly and instructed to fix the distant target with the other eye. The procedure was started using minimal energy (0.8 mJ) and increased as per the need. Laser shots were to be placed across the tension lines and openings were created starting from 12’o clock position and moving towards 6’o clock position as per the requirement. Topical antibiotics and steroid eye drops (Ofloxacin and Dexamethasone) were given four times a day for seven days after procedure to counteract post laser infection and inflammation. Anti-glaucoma medication was started if IOP> 21 mm Hg or increase by 5 mm Hg or more anytime during follow up.

In our present study, while evaluating the demographic details, we found the gender distribution of 56 females and 41 males from total 97 patients enrolled. Majority of the patients, 87 patients out of the 97 total patients, were aged between 51 and 80 years while the most common involvement was in the 61-70 years age group. There was right eye dominance with 52 right eye involvement against 45 left eye involvement of the participants. On asking for the history of cataract surgery it was found the greatest number of patients had undergone Manual Small Incision Cataract Surgery (MSICS). The most common type of PCO was Capsular Fibrosis (Figure 1 ), seen in 56 patients, with Elschnig’s pearls (Figure 2) seen in 35 and Soemmerring’s ring (Figure 3) seen in 6 patients out of total 97 patients. 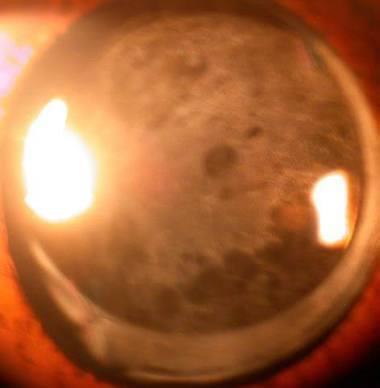 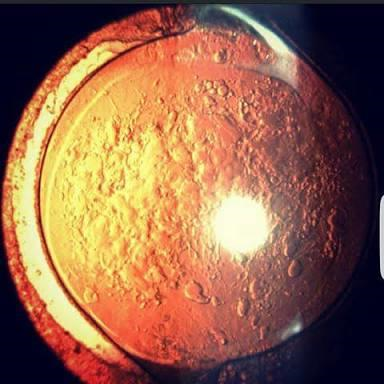 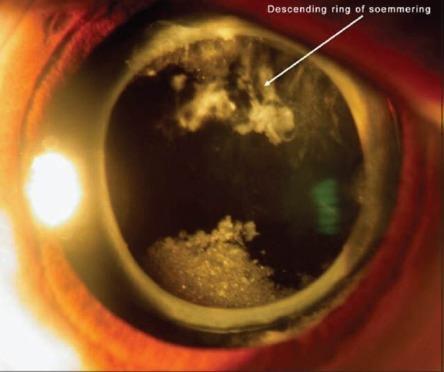 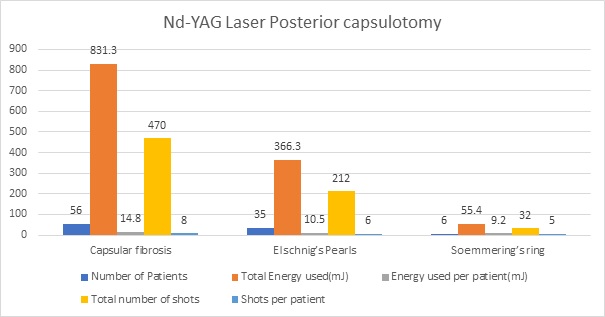 In our study, nine patients showed transient increase in IOP of 5mm Hg or more. This also compares favourably with other studies e.g., Steinert et al reported an incidence of retinal detachment or tears, and cystoid macular edema (CME) ranging between 0.56 to 1.23% after laser cpasulotomy.4 Our cases with rise in IOP had greater number of laser shots were given, thus dissipating higher amount of laser energy to the eye, however the rise in IOP was transient and subsided effectively with antiglaucoma medications (timolol maleate 0.5% BD for three days).

In another study, Stark et al suggested that the risk of cystoid macular edema (CME) and retinal detachment can be diminished if the onset of PCO and the subsequent Nd YAG capsulotomy required can be delayed to at least 12 months from surgery. Also, thorough posterior segment examination is required to identify the defects early to prevent further progression.5 In our study, the case of cystoids macular edema was treated with local steroids with aim to return the eye at pr-procedure level, but persisted. Slit – lamp examination did not show any significant vitreous changes.

The effect on pearls over time after a capsulotomy has been extensively studied by Caballero et al. and suggested that pearls are due to equatorial epithelial cells migrating across the surface of the posterior capsule and transforming into bladder cells. There was initial proliferation and displacement of pearls, within a few weeks of laser may be due to a reaction to a cell growth stimulus in vitreous, severe enough to cause occlusion of the capsular opening. It has been noted in case reports between 2 and 4 years after capsulotomy, however most of them had a reduction in pearls and after 4 years of the procedure, the capsule was completely transparent, most likely due to the cells had fallen into vitreous or had disappeared through apoptosis.6

There was no set size for capsulotomy. It was decided clinically depending on the size of non-dilated pupil. The Nd YAG laser capsulotomies enlarged progressively up to 1 month and stabilized thereafter. Suggested method to reduce the incidence of PCO include thorough cortical clean up, continuous curvilinear capsulorrhexis and placement of capsulorrhexis edge over the optic of intraocular lens (IOL) with complete in the bag fixation of lens. Since the epithelial pearls have their origin in the peripheral equatorial lens bow, intra-operative polishing of the central posterior capsule, which has no epithelial lining, generally does not help in reducing the incidence of PCO.

There were few Limitations in our study like irregularities in follow-up due to the longevity of study duration requiring change in follow-up schedule, poor intra-procedural co-operation from some patients due to anxiety and poor compliance in terms of post-procedure treatment adherence was noted. However, based on our experiences from the study, we can make few recommendations like proper pre-procedural work up reduces the chances of complications along with regular follow-up with fundus examination is recommended. Transient rise in IOP is the most common side effect, hence regular IOP measurement is highly recommended and long-term changes in the IOP should be sought for the patients showing immediate post procedure rise in IOP. Anxiety played a significant role in co-operation of patients, so we recommend additional counselling in such patient types.

Nd-YAG laser capsulotomy is an easy, practical modality to treat posterior capsular opacities, but is not a completely innocuous procedure. Due precautions should be taken in pre- and post-procedural stages including medications, thorough counselling, proper focusing and steady fixation of the patients to minimise the complication.

Authors acknowledge the immense help received from the scholars whose articles are cited and included in references of this manuscript. The authors are also grateful to authors / editors / publishers of all those articles, journals and books from where the literature for this article has been reviewed and discussed.