Background: Anterior segment optical coherence tomography (AS-OCT) is a newer technology that provides two-dimensional images of corneal infiltration. This study was undertaken to assess whether AS-OCT can aid objective evaluation and response to treatment in resolving microbial keratitis.

Materials and Methods: This prospective study was performed on 17 patients of who underwent slit lamp and AS-OCT examination at presentation and follow up on days 3, 7, 14, 28 and 6 weeks. A standardized scanning protocol was used to measure the corneal thickness (CT) and infiltrate thickness (IT) using the caliper tool of a commercially available AS-OCT device.

Conclusion: AS-OCT can show morphological characteristics of microbial keratitis and give quantitative assessment at every follow up.

Anterior segment optical coherence tomography (AS-OCT) is a relatively new technology that may be useful for monitoring corneal infections. Previous studies have demonstrated many qualitative changes occurring in the corneal morphology in cases of microbial keratitis,3 as well as quantitative analysis of these changes.4, 5, 6, 7 But so far, no study has analyzed both qualitative and quantitative parameters of different types of microbial keratitis. Moreover, AS-OCT has limited literature to elucidate the nature of such abnormalities with only one such study done in India.3

Hence, this study was undertaken to observe and quantify changes seen on AS-OCT in patients of microbial keratitis on treatment, and to correlate them with the slit lamp findings.

This study was conducted between October 2016 and November 2017. Patients with clinically diagnosed microbial keratitis seeking treatment were recruited. Children below 12 years and recruited patients lost to follow up were excluded from the study. Finally, 17 patients were analyzed.

A complete ophthalmic history was taken and slit lamp examination including examination of the conjunctiva, tear film, cornea, anterior chamber, iris, lens and anterior vitreous was done. Anterior segment imaging was carried out by a commercially available OCT device, the Cirrus HD-OCT (Model 500) by Carl Zeiss Meditec. Inc. (Dublin, CA). AS-OCT and slit-lamp examination were carried out on presentation (day 0) and, subsequently on days 3, 7, 14, 28 and 6 weeks of treatment. All patients underwent treatment based on clinical findings.

17 patients with a clinical diagnosis of microbial keratitis were recruited in our study. The patient characteristics are summarized in Table 1. Of the 17 patients included in the study, 11 patients were females and 6 were males. The age of the patients ranged from 25-60 years with an average of 47.5 years. Maximum patients belonged to the age group 41-50 years. The major risk factors identified in the study were trauma with vegetative matter (53%) and unknown foreign body (12%). No risk factor was identified in 35% of the cases. After a follow up of 6 weeks, 65% of the ulcers had healed completely whereas 35% of the ulcers had not.

Besides this, unique morphological AS-OCT patterns were seen in the corneal stroma such as cystic spaces and microcystic edema. In the epithelium, a well- defined defect could be seen. Endothelial features included keratic precipitates and retrocorneal inflammatory plaque.

Stromal features are seen in Figure 3a to e. Both stromal infiltration and scarring appear hyperreflective. Stromal cystic spaces are hyporeflective cavity like areas in the stroma (Figure 2 a). A differentiating feature between infiltration (Figure 3 b) and scarring (Figure 3 e) is that infiltration has ill-defined borders compared to scarring which shows more clearly defined borders and an intact epithelium above it. Stromal edema appears as diffuse areas of decreased reflectivity (Figure 3 c). Microcystic edema was a unique feature seen on the AS-OCT in viral keratitis. It was localized to the epithelium and/or anterior stroma (Figure 3 d).

Figure 3f shows an ulcer with sloping edges. Hypereflective area of infiltrate is seen in the base of the ulcer. Some degree of re-epithelization of the defect can also be seen.

Endothelial features are shown in Figure 4, Figure 5. Figure 4 shows an inflammatory plaque attached to the corneal endothelium. Figure 5 shows the presence of a hyperreflective aggregation of inflammatory cells which are clinically seen as keratic precipitates. The latter were seen in case of disciform keratitis whereas endothelial plaque was seen in fungal keratitis. 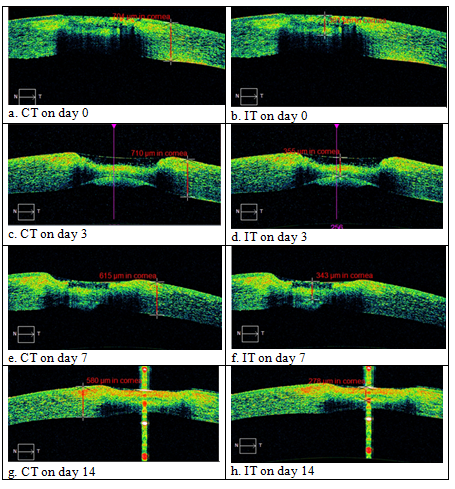 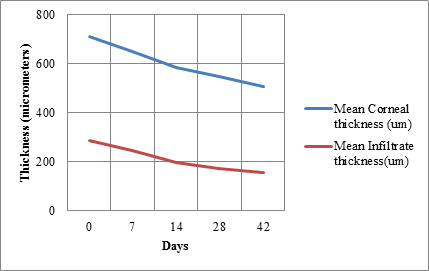 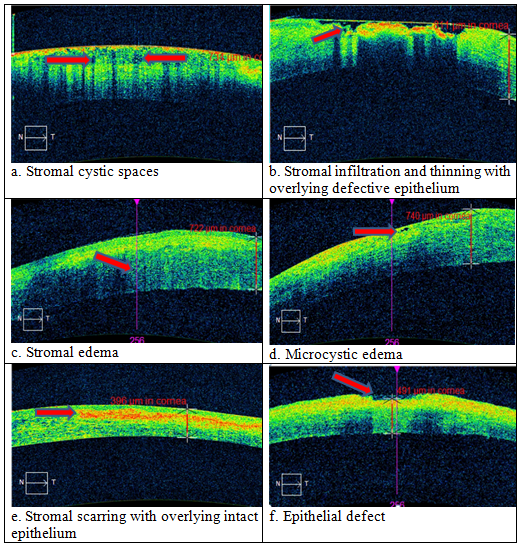 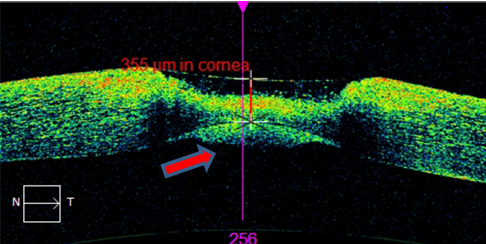 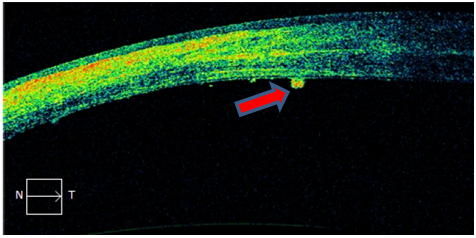 Conventionally the slit lamp has remained the gold standard for diagnosis and management of microbial keratitis. However, the limitation of slit lamp is its inability to assess the depth of infiltration due to associated stromal edema. AS-OCT, on the other hand, allows a more accurate assessment of the corneal parameters such as measurement of depth of infiltration, stromal thinning in areas of ulceration and different morphological patterns.

Using AS-OCT, we have attempted to quantify the temporal change in corneal and infiltrate thickness. We also demonstrated some unique morphological patterns of microbial keratitis which may help in the etiological diagnosis as well as assessing the prognosis of the case.

We performed serial scans of the cornea and measured the CT and IT at every follow up.

Konstantopoulos et al5 recorded a maximum CT of 1490 µm and IT of 840 µm. In an earlier case series4 on microbial keratitis by the same author, the maximum CT recorded was 1560 µm and maximum IT was 590 µm. In the same study, there was a single case of combined bacterial and fungal infection where the CT was not recordable and the maximum infiltrate recorded was 3640 µm. Sometimes, measurements of CT and IT in cases of fungal or combined infections are difficult due to presence of thick infiltrate which does not allow proper demarcation of endothelium.

In the four cases of viral keratitis, CT on day 3 had decreased in two cases (740 µm to 627 µm and 450 µm to 396 µm) whereas IT showed a decrease (426 µm to 337 µm) in only one case. This reflects the more chronic course of viral keratitis. Only the daily reduction in IT over 6 weeks was statistically significant. Hixson et al8 demonstrated a decrease in CT over a period of 25 and 33 days, in two cases of disciform keratitis with resolution of corneal edema on AS-OCT as well as slit lamp.

In a similar study by Kobayashi et al.,9 they demonstrated high reflectivity in the endothelium and deep stromal layers in 10 of 13 cases which decreased throughout the course of antiviral treatment. They, however, did not perform a quantitative analysis.

In AS-OCT, corneal infiltrates and scar both appear hyperreflective. This was in accordance with previous studies. Soliman et al,7 have distinguished infiltrate and scar in that, infiltration has ill-defined borders with overlying defective epithelium. Scarring, on the other hand, has well defined borders with clear well delineated epithelium above. With the resolution of keratitis, the infiltrate is replaced by scar tissue. It was noted that infiltration was associated with increased CT whereas scarring led to a decrease in CT. Konstantopoulos also reported that in later stages of the disease, when scar tissue develops, the affected cornea may become thinner than adjacent healthy tissue.4 A similar observation was reported by Meredith et al.9 in a study on contact lens related corneal infiltration.

Stromal edema is seen as diffuse hyporeflective spaces in the stroma, loss of convexity of corneal endothelium, an increase in corneal thickness or in severe, cases, ruffles or folds in Descemet’s membrane (Figure 3c). Stromal edema was seen by Soliman et al8 in both fungal and bacterial keratitis and by Naik et al7 in bacterial, fungal and viral keratitis. Edema may also be localized in the form of microcystic edema, not seen clinically (Figure 3 d). This type of microcystic edema was also found by Hixson et al8 in monitoring resolution of disciform keratitis.

Our findings correlate with those of slit lamp which showed resolution of congestion, corneal edema and subsequent corneal scarring. At the end of the follow up period, 12 of the 17 cases were healed. Thus, AS-OCT can be a useful adjunct to slit lamp examination in diagnosing the exact histological/pathological stage of corneal ulceration.

Figure 3 f shows a defect in the epithelium and anterior stroma, clinically recognized as an ulcer. The floor of the ulcer shows active infiltration (hyperreflective) and there is ongoing epithelization on top. Such features cannot be demonstrated by slit lamp and this highlights the adjunctive role of AS-OCT in microbial keratitis.

Figure 4 shows the presence of an endothelial plaque. Although the exact width of the plaque could not be measured due to lack of horizontal caliper in our AS-OCT, the width of this plaque was found to decrease as the infection resolved. This again highlights the role of AS-OCT in seeing retrocorneal features. Konstantopoulos2 demonstrated a similar plaque on the endothelium and measured the width of this plaque.

Figure 5 was a case of viral keratitis and shows that the infiltrate is mostly confined to the anterior part of the stroma with overlying intact epithelium. The posterior surface of the cornea shows the presence of keratic precipitates which are accumulations of inflammatory cells. In monitoring the resolution of disciform keratitis, stromal edema, microcystic edema and keratic precipitates were seen by Hixson et al8 and Konstantopoulos et al.4

In one case not responding to treatment, neither CT nor IT could be measured. This was probably because of dense infiltration and AS-OCT device with a wavelength of 1310 nm may be more useful in measuring corneal parameters in such cases. In the case series by Konstantopoulos,4 one case with mixed bacterial and fungal infection showed progressive increase in CT for almost a week and had to be finally taken up for a therapeutic keratoplasty. Hence, we concluded that dense infiltration, progressive increase in CT or thinning of the cornea with active infiltration should be taken as dangerous signs. These patients should be intensively followed for early therapeutic keratoplasty if descemetocele formation occurs.

Scans must be interpreted in the context of the clinical situation and examination. AS-OCT cannot replace slit-lamp examination, but it does provide additional information to help in assessment.

This study had several limitations. First, was the inability to see the posterior limit of the cornea in cases of thick infiltrate. This was because of the use of 830 nm wavelength light, unlike the 1310 nm that is used in AS-OCT and which allows deeper tissue penetration by reducing scattering. Secondly, the OCT machine used by us did not have a horizontal caliper tool such that the width of the infiltrate, scar or defect could not be measured. Thirdly, our SD-OCT images only a finite section of the cornea; for widespread keratitis or diffuse corneal edema, SD-OCT devices that image the cornea from limbus to limbus with better resolution would be more useful. Fourthly, scanning the exact desired location of the cornea at every follow up visit is subjective in nature. Lastly, a follow up period of 6 weeks was insufficient, as certain cases of fungal keratitis with thick stromal infiltrate can take longer to heal. We could document complete epithelial healing in only 12 out of 17 cases at the end of this period.

This study involved both quantitative and qualitative analysis of resolving microbial keratitis. With treatment, both CT and IT showed a significant decrease. This correlated well with the slit lamp examination which showed a decrease in acute inflammatory signs such as conjunctival congestion, corneal infiltration and hypopyon height. Thus, serial scans helped to evaluate the response to treatment. Secondly, certain histological patterns were seen on AS-OCT which cannot be seen on slit lamp such as stromal thinning, cystic spaces, microcystic edema. Hence, AS-OCT showed additional morphologic features and can be used as an adjunctive method to follow microbial keratitis with greater accuracy and objectivity compared to slit lamp examination alone.

AS-OCT provides a cross-sectional image showing the location and extent of edema throughout the cornea and not just comparison of corneal and infiltrate thickness. Because it is a noncontact instrument, it improves patients’ compliance for follow up.