A study to compare intraocular pressure using Perkins and Schiotz tonometer with respect to Goldmann applanation tonometer as a gold standard in a tertiary health care centre, Navi Mumbai

Materials and Methods: 100 eyes of 50 patients aged 18 to 65 years presenting to Ophthalmology OPD were selected by randomization and detailed general and ophthalmic examination was done. IOP was measured using applanation tonometers (Perkin’s and GAT) and indentation tonometer (Schiotz tonometer) in that order.

Conclusion: Measurement of IOP with Perkin’s was closer to the values obtained by GAT. Perkin’s being portable, easy to use and precise tonometer than Schiotz tonometer, can be considered as an excellent substitute to GAT, for large scale examination, if cost is not a concern.

Glaucoma is the second leading cause of blindness, affecting 70 million people worldwide.1 The global prevalence of glaucoma in population aged 40 to 80 years is 3.54% and the number of people suffering from glaucoma is estimated to increase to 76.0 million in 2020 and 111.8 million in 2040.2, 3 Intraocular pressure(IOP) is the principal modifiable risk factor for the development and progression of glaucoma.4, 5, 6

IOP is measured by different types of instruments based on mainly two different principles. Tonometers are based on either applanation  methods, such as Goldmann tonometer, Perkin’s tonometer, Dynamic contour tonometer, Icare Pro tonometer, or indentation, like the Schiotz tonometer. Various factors influence IOP measurement such as central corneal thickness (CCT), biomechanical properties of cornea and corneal astigmatism.8

Perkin’s tonometer due to its hand held feature becomes very convenient and easy to use in any position yet expensive. The Goldmann tonometer (GAT), because it has been the instrument of choice for many years, is not only widely regarded as the best measurement tool for clinical decision making in glaucoma, but it has also become the ‘gold standard’ or validating criterion against which all other tonometers are compared. The instrument has a simple robust design which also helps to make it the instrument of choice in ophthalmology practice.9 Schiotz tonometer is an inexpensive, simple and portable tonometer. A major drawback of Schiotz tonometer is false reading due to ocular rigidity affecting IOP estimation.

IOP is an important consideration for diagnosis of glaucoma, for setting a target pressure and for evaluating treatment outcomes. Thus, a periodic measurement of IOP is necessary for the effective monitoring of IOP for early diagnosis and prevent progression of glaucoma.

In this study, we have compared IOP between Perkin’s and Schiotz tonometer with respect to GAT as gold standard in an adult population in a tertiary care hospital.

A total of 100 eyes of 50 patients presenting to Ophthalmology OPD were selected by simple randomization. Ethics Committee approval was taken from Ethics Board.

The relevant history was taken in all subjects. Detailed anterior and posterior segment examination was done. IOP of both eyes was measured using following tonometers; Perkins tonometer, Goldmann’s tonomteter and Schiotz tonometer in that order at 10 minutes interval between each tonometry. Order of measurement was followed for the ease of measurements by the examiner. Central corneal thickness was measured using DGH 500 Pachymeter for all patients. IOP was adjusted with the correction factor according to the CCT value.

Patient was asked to sit on a chair. After anaesthetizing the right eye, tear film was stained with 2% sodium fluorescein strip. The knob of the tonometer was adjusted at 10mm of Hg and cobalt blue filter was used. The biprism was gently touched to the cornea. Two fluorescent semicircles were seen. The knob was adjusted till the inner edges of both circles just overlapped and the reading was noted. The procedure was repeated for the left eye. Three consecutive readings were taken of each eye and their mean was calculated which was considered as the final reading. Each mark stands for 2mmHg of IOP. (Figure 1)

The cornea was anesthetized with a topical proparacaine and the tear film was stained with 2% sodium fluorescein strip. Patient was positioned properly on the slit lamp. The knob of applanation was adjusted at 10mm of Hg. With the cornea and biprism illuminated by a cobalt blue light from the slit lamp, the biprism was brought into gentle contact with the apex of the cornea. Two fluorescent semicircles were viewed through the biprism and the knob was adjusted until the inner edges overlapped and the reading was noted. The procedure was repeated for the left eye. Three consecutive readings were taken of each eye and their mean was calculated which was considered as the final reading. Each mark stands for 2mmHg of IOP. (Figure 2)

Patient was asked to lie down in a supine position and was asked to look at a fixed target. Schiotz indentation tonometer was calibrated using test block. Globe was exposed without exerting pressure and the tonometer foot plate was placed on the anaesthetized cornea so that the plunger moved freely vertically. The scale reading was noted. The 5.5 gram weight initially was used, but if scale reading was four or less, additional weights were added to the plunger. Three total readings were taken and the average reading was taken as the final reading. These readings were converted to IOP measurement in mm of Hg by using Friedenwald’s nomogram. (Figure 3)

Intra class correlation ICC was used to check the reliability between the 3 techniques.

For all the statistical tests, p<0.05 was considered to be statistically significant, keeping α error at 5% and β error at 20%, thus giving a power to the study as 80%.

Interclass Correlation was done to assess the reliability of the three tonometers.

There was a statistically highly significant & near complete agreement between the 3 techniques (p<0.01) with ICC value >0.8. 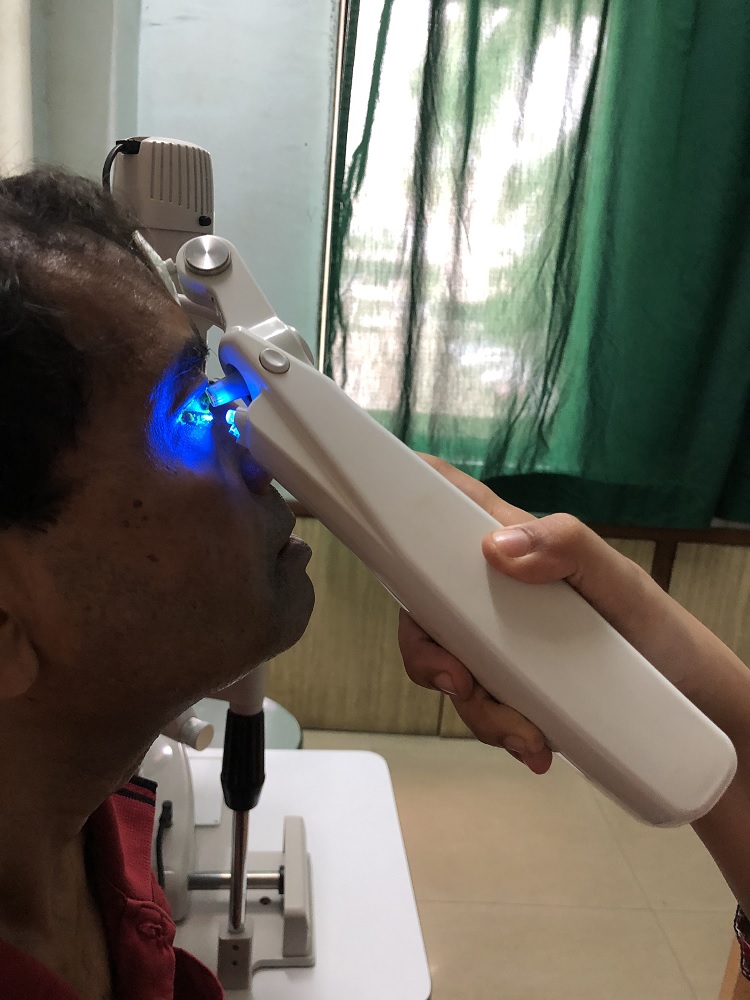 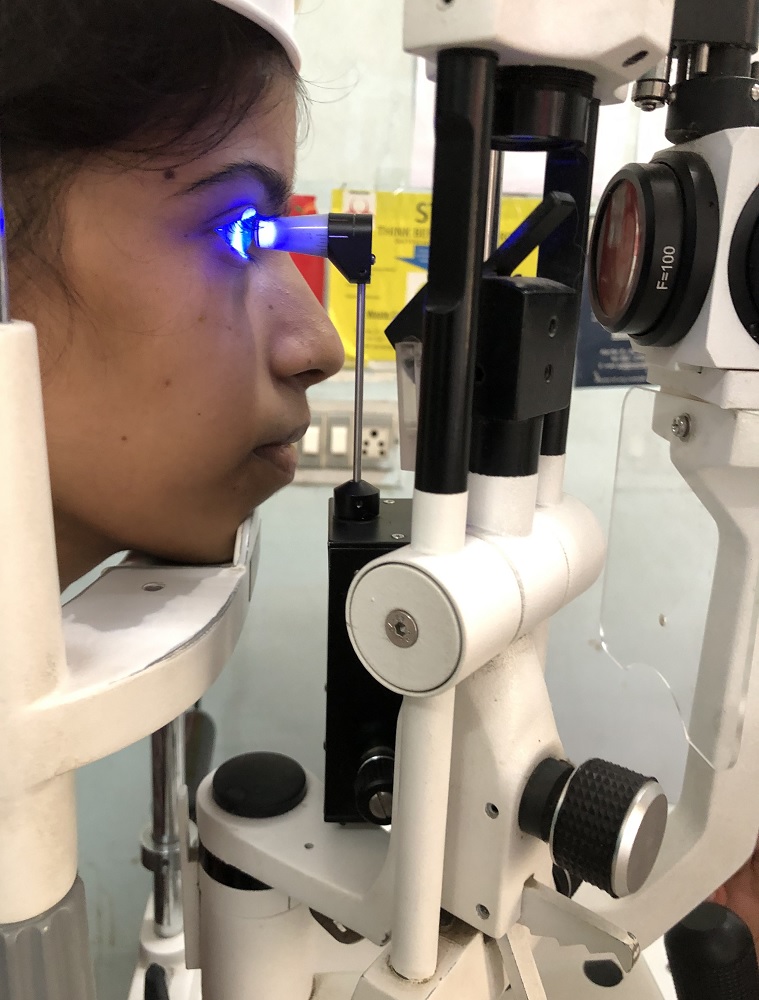 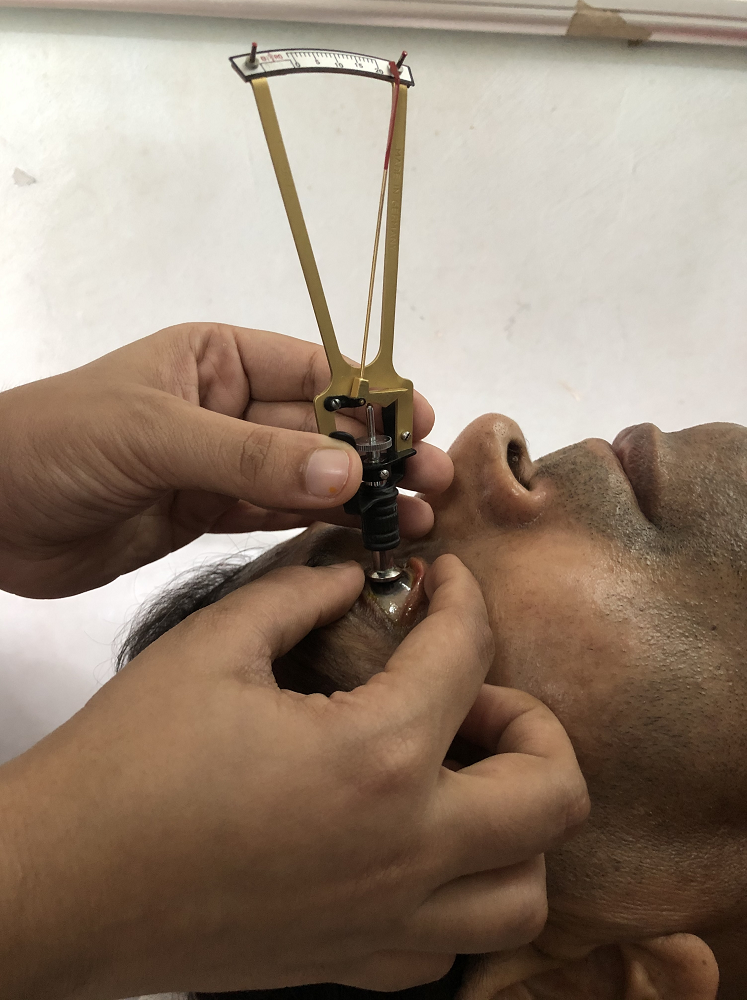 Distribution of study population as per sex 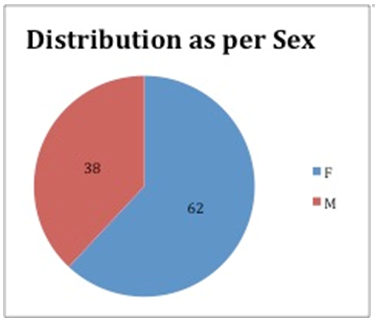 Distribution of study population as per eye 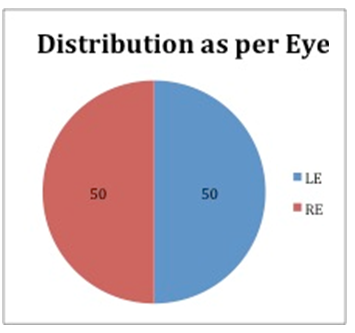 Inter technique comparison of IOP of the three tonometers

Inter group comparison of values of IOP measured by Perkin's tonometer of A): Males and Females; B) Left eye and Right eye 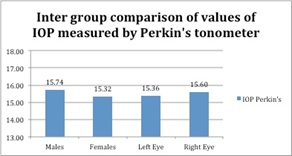 Inter group comparison of values of IOP measured by GAT of A): Males and Females B): Left eye and Right eye 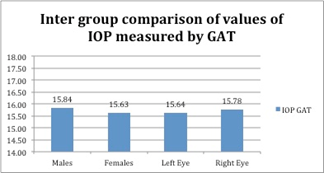 Inter group comparison of values of IOP measured by Schiotz tonometer of A): Males and Females B): Left eye and Right eye 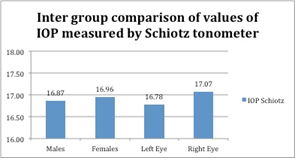 Perkin’s tonometer and GAT are applanation type of tonometers. They work on the Imbert-Fick principle, which states that “the external force (W) against a sphere equals the pressure in the sphere (Pt) x area flattened (A) by the external force”.7 The law requires a perfectly spherical, dry, thin and flexible sphere.7 The diameter of the external area of corneal applanation is 3.06 mm, which is used in the standard instrument. The volume of displacement produced by applanating an area with a diameter of 3.06 mm is approximately 0.50 mm3, so that Pt is very close to P0 and ocular rigidity does not significantly influence the measurement.7

It is strongly affected by the CCT and requires CCT correlation to adjust IOP measurements.8 The mathematical calculation for GAT is based on a presumed average CCT of 520 μm.7 Variations of CCT in normal corneas can lead to falsely higher pressure readings with thicker corneas and falsely lower ones with thinner corneas. Also, the appropriate amount of fluorescein is important because the width of the semicircle meniscus influences the reading. From 300 datasets involving healthy eyes, the group-averaged CCT was 534μm.7 Therefore, in this study, we have included patients with CCT readings between 520-560μm because they were found to have IOP within normal range.

The indentation tonometer is the Schiotz tonometer, which consists of a footplate that rests on the cornea and a weighted plunger that moves freely (except for the effect of friction) within a shaft in the footplate with the degree to which it indents the cornea is indicated by the movement of a needle on a scale. A 5.5-g weight is permanently fixed to the plunger, which can be increased to 7.5,10, or 15 g by adding additional weights. When the plunger indents the cornea, the baseline or resting pressure (P0) is artificially raised to a new value (Pt). The change in pressure from P0 to Pt is an expression of the resistance an eye offers to the displacement of a volume of fluid (Vc). The accuracy depends on ocular rigidity and expulsion of intraocular blood during indentation tonometry.7 In addition, a relatively steep or thick cornea causes an increased displacement of fluid during indentation tonometry, which leads to a falsely high IOP reading.

In older age- groups, the apparent rise in mean IOP with increasing age is greater among women than men, and coincides with the onset of menopause.9 Therefore, we have compared the IOP values in men and women but no significant difference was noted.

Various studies have been conducted earlier which show that GAT values are considered to be the standard reference and various tonometers are compared.

Ohed Ohana did a prospective comparative study using a convenience cohort of post-DSEK patients with compact grafts and IOP was measured in this group with Goldmann applanation tonometer(GAT), I-care Pro, Tonopen XL and Schiotz tonometer. He found that IOP measurements in post DSEK patients showed good agreement between GAT and either Tonopen XL or I-care Pro. Schiotz tonometer has large variations in this patient group. IOP measurements and difference were not dependent on central corneal thickness.10 In this study, we studied IOP and CCT within normal population with no prior ocular surgical history and observed the same results.

Ito K, et al. conducted a study on seventy-four patients with no history of intraocular surgery and IOP was measured using dynamic contour tonometry (DCT), GAT and Non contact tonometer(NCT). He learnt that IOP measured by dynamic contour tonometry correlated with IOP measured by GAT or NCT with a roughly 3.0mm Hg higher value, and these differences were greater in patients with a thinner CCT in Japanese individuals.11

F Carbonaro et al held a study at St Thomas’ Hospital, London among 694 patients to compare the reliability of the gold standard GAT with that of ocular response analyser and DCT. They found similar reliability in all three tonometers. GAT measurements were found to be significantly lower than the two newer instruments.12

Swathi Nagarajan A et al. did a cross-sectional study in Southern India to measure the IOP in 400 patients using three tonometers; Schiotz tonometer, Perkins tonometer and NCT. He found that both the tonometers showed a significant correlation with Perkin’s tonometer over a range of IOP and CCT of 501-550 μm, with the Schiotz tonometer performing better than the NCT.13

Arora et al. did a comparative study between Perkins hand held and Goldmann slit lamp-mounted methods. They observed that Perkins tonometer yields IOP measurements that are closely comparable with GAT and suggested that Perkin’s tonomter should be used in routine clinical practice.14

In our study, we found that Perkin’s tonometer values were closer to GAT values than Schiotz tonometer.

In this study, IOP was measured in 100 eyes in a tertiary centre using Perkin’s tonometer, Goldmann’s applanation tonometer and Schiotz tonometer of both sexes and the readings were compared.

There was a statistically significant difference noted on IOP measurement using Perkin’s and Schiotz tonometer to that of GAT in this study. Measurement of IOP with Perkin’s was closer to the values obtained by GAT.

Ours being a teaching institute, we had access to all the three tonometers equally. Perkin’s being portable, easy to use, bedside technique and precise tonometer than Schiotz tonometer, can be considered as an excellent substitute to Slitlamp mounted GAT, for large scale examination, if cost is not a concern.

MF Armaly On the distribution of applanation pressure. :Statistical features and the effect of age, sex, and family history of glaucomaArch Ophthalmol196573118