Materials and Methods: One hundred and fifty eyes were included in the study and were labeled as group A. Equal number of age matched controls were included in group B. RNFL thickness was measured using optical coherence tomography for optic nerve head (ONH) scan.

Retinal nerve fibre layer (RNFL) thickness varies at different stages of neuropathy and the variation in thickness is strongly co-related with visual defects. Decrease in RNFL thickness maybe suggestive of early stages of optic neuropathy and this change can be observed even before the detection of any visual disturbances. Hence, it is of clinical significance.1, 2, 3 The pathophysiological model that explains changes in RNFL thickness in patients of CKD includes, vascular ischemia due to anaemia, generalized atherosclerosis and hypotension, retinal ischemia due to transient imbalance in fluid and electrolytes in patients on haemodialysis (HD).4 Due to ischemia, retinal microvasculature is affected, resulting in decrease blood supply to nerve fibre layer and a consequent decrease in RNFL thickness.1 During HD osmotically active substances are diffused out, as a result body fluid is lost and the blood osmolarity also decreases.5, 6

OCT has the maximum sensitivity to measure RNFL thickness and can detect even very small changes.7 Spectral domain OCT (SD-OCT) is a better device as compared to conventional time domain OCT (TD-OCT), as it provides three-dimensional reconstruction of the scanned area with better resolution.8

One hundred and fifty eyes of 75 patients attending the Medicine OPD having CKD and fulfilling the inclusion criteria and willing to give informed consent were included in the study. Equal number of controls, who were age matched and those who were ready to participate were selected for comparison from the healthy patients attending the Ophthalmology OPD. Study was done over a period of 12 months. Patients of CKD with age >18 years were included in group A and age matched healthy individuals were included in group B. Exclusion criteria for both the groups consisted of patients with any ocular pathology (Glaucoma, age-related macular degeneration, diabetic retinopathy, optic nerve pathology, retinal artery/vein occlusion, vitreous haemorrhage). History of any retinal laser or retinal surgery, cataract surgery less than 3 months, poor media clarity, extremes of ages (< 18 years and > 80 years), any ocular inflammation (uveitis, vasculitis), refractive error of >3diopters hypermetropics or < 3 diopter myopics and uncooperative patients.

The data was compiled in MS Excel 2010. SPSS software version 22 was used to perform the statistical analysis. Categorical data was expressed as frequency and continuous data as mean ± standard deviation. General linear model analysis of variance (ANOVA) was used to analyse the normally distributed data for more than two groups. For the comparison of continuous data t test was employed amid two groups (group A and group B). The p value of <0.05 was taken as statistical significant.

Mean RNFL thickness was also measured in all 4 quadrants. On comparison statistically significant thinning was noted in superior and inferior quadrant of group A as compared to group B (p value= 0.002 and 0.000 respectively), using unpaired t-test (Figure 3). Other quadrants, temporal and nasal, also showed decrease in mean RNFL two thickness in group A, but it was statistically not significant. 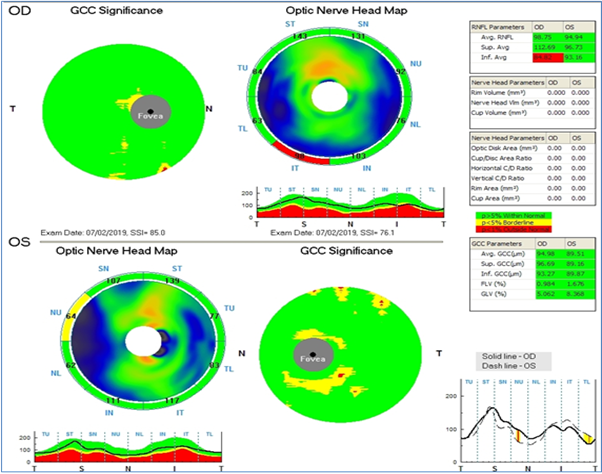 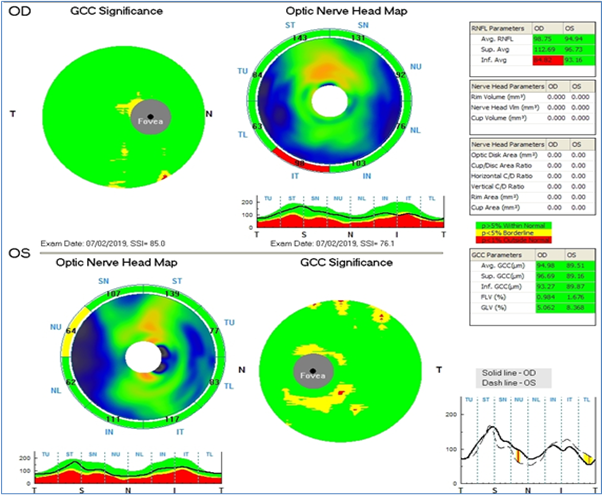 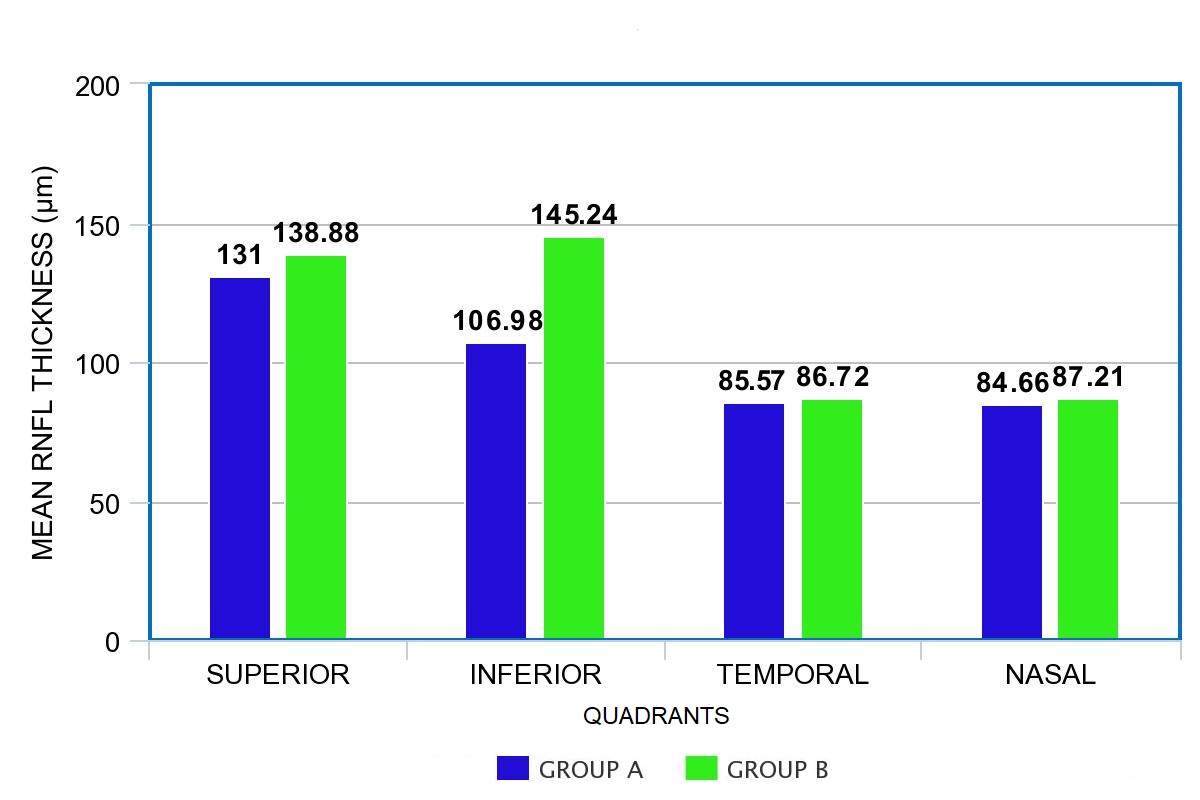 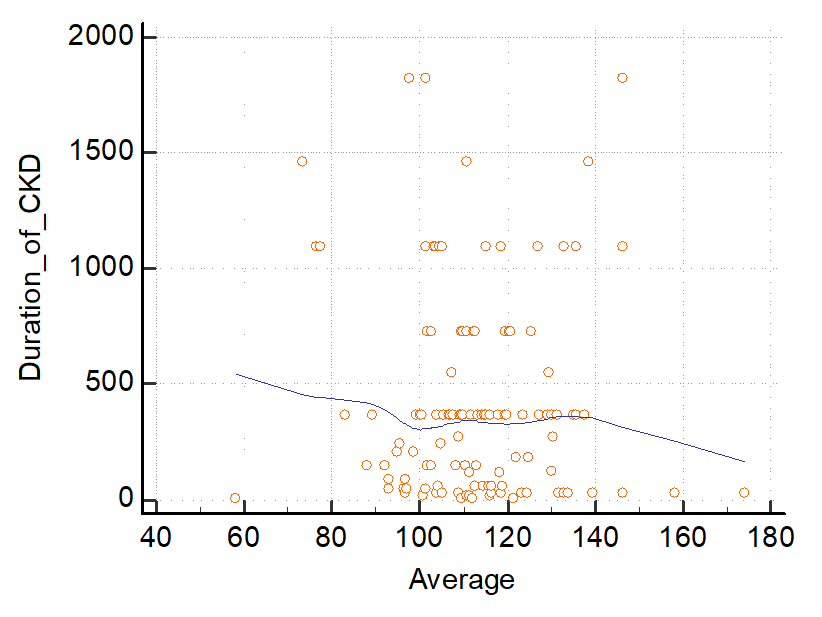 We also analysed quadrant wise RNFL thickness in “HD and non- HD group”. Results showed increase in RNFL thickness in superior and temporal quadrant in “HD group” as compared to non- HD group and it was statistically significant (p value of 0.000 and 0.042 respectively). Other two quadrants also showed RNFL thickness more in the HD group but it was statistically not significant. These results can be attributed to vasodilation following HD. In renal failure, there is accumulation of inhibitors of Nitrous oxide synthase. With HD these substances are removed, thereby leading to accumulation of Nitric oxide and adrenomedullin. These are the vasoactive substances which eventually leads to vasodilation of retinal vessels. On the contrary, Demir et al. in their study noted mean “RNFL thickness” to be thinner in post HD group as compared to control group, but statistically significant difference was observed only in the inferior quadrant.12 These changes maybe owing to transient fluid loss that may occur during dialysis, which leads to imbalance of fluid and electrolytes and as a consequence retinal ischemia and RNFL thinning occurs.10

The current study was a cross-sectional study, therefore comparison of RNFL thickness pre and post HD could not be assessed. Another limitation of the study was interpersonal variability while taking the OCT reading. Small sample size was also one of the limitation of the study. Further randomized trials with larger group of patients and additional parameters could further enhance the knowledge.

The present study concluded that the mean of average RNFL thickness was significantly thinner in CKD patients as compared to non- CKD patients. Decrease in RNFL thickness maybe suggestive of early stages of optic neuropathy and this change can be observed even before the detection of any visual disturbances with the help of OCT. OCT has the maximum sensitivity to measure RNFL thickness and can detect even very small changes. Hence, it is of clinical significance.