Materials and Methods: This study was a retrospective analysis in which data of 100 cases of senile cataract who underwent temporal phacoemulsification with foldable IOL was selected. Patients underwent post op examination at 4 weeks and only those patients whose vision was improving to 6/6 with or without correction was selected and their post operative refractive error in form of spherical equivalent was evaluated at 4 weeks of surgery and analysed with the preoperative calculated IOL power. All complicated cataract, cases with ocular pathology, patient with intraoperative or post operative complication and patient with history of any ocular surgery were excluded from the study. Formula used were SRK/T, HOFFER Q and HAIGIS.

Conclusion: While pre op accurate calculation of IOL power is very important for better visual acuity post op but just looking at any IOL power we cannot guess about refractive error that it may result.

Cataract surgery underwent huge evolution over the years. Being one of the most common elective surgical procedures, cataract surgeries witnessed huge improvement with personalized biometric measurements. Cataract surgery in the present era is considered more of refractive procedure and patients expect to have a glass free life. A correct IOL power can minimize the residual refractive error after surgery. Axial length and keratometry finding contribute to the IOL power. One of the most stablised correlation is between axial length and residual refractive error.1 While an error of 1mm measurement error causes 2.8 D calculation error of post refractive error and error of 1 D keratometry causes approximately error of approximate 1 D calculation error.2 Due to these reason ophthalmologist are extra careful in hyperopic eyes biometry and eyes with unusual findings. Formula related errors can cause errors of calculation. While srk/t is good for medium range eyes, hoffer q and haigis are good for extreme values.3 A scan, keratometry and formula errors all are included in IOL power. So it become interesting to see how different IOL power of the IOL number ranges gives residual refractive error. Spherical equivalent in ocular refraction is the power of external lens which is required to focus images clearly on retina.4 This study proposes to study the correlation between the value of IOL power and spherical equivalent of the refractive error after 4 weeks of temporal phacoemulsification.

The study design was retrospective analysis which included 100 post-operative cataract patient data from month of January to June 2020 at Sankara eye hospital, Kanpur who underwent temporal phacoemulsification surgery. The surgeries were done by four different surgeon of equal competence. A scan was done by US biometry and IOL master. Automated k1, k2 readings were used The machine used for surgery was Alcon’s Laureate Foldable lenses from different brands were used in the surgery.

Preop evaluation was done and formula used were SRK/T., HOFFER Q AND HAIGIS. 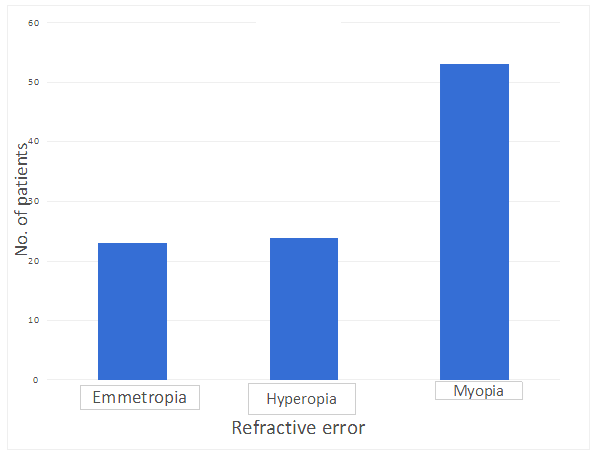 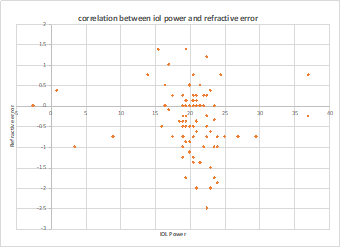 All patient were evaluated for the spherical equivalent for refractive error at 4 weeks after best accepted subjective refraction was taken into account. Patients having myopic error or hyperopic error upto 1D are 84 percent. Correlation between IOL power and post op refractive error was not statistically significant in our study

Our study result were similar with Aristodemou et al6 in which refractive error of less than 1 D were present in 80 percent of cases. Advantage of this study was a large sample size and values were taken from many surgical centres.

Olsen et al8 reported that 87 percent patient refractive error was within 1D limit. This study was similar to our study because it used different IOL type of different company and different formula were used. The IOL used were from range of 18.92 -37.45.

In Hubaille et al12 study different types of foldable lenses of different brands were use as in our study. This study was also retrospective. They found the error were within 0.75 D in 78% cases and within 1 D in 88% cases.

The royal college of ophthalmologist recommends the need to achieve post op target refraction of 1 D to be achieved in 90 percent of cases.

Although our study showed the in 84 percent cases refractive error was less than 1D Advantage of our study was all ranges of IOL numbers starting from a value of -2.5 D to 37 D were included and axial length from 19.0 to 30.5 mm were included that makes our data more inclusive and different formula as well as different lens type were used.

Disadvantage of our study is its small sample size, four different surgeon doing biometry and surgery.

There are various reasons of refractive surprise in surgery14

There can be various method to reduce refractive surprise3

Our study with its result showed that there was no statistically significant correlation between IOL power and post op refractive error and so there is no way that we can guess about the residual refractive error on the basis of IOL power.