Materials and Methods: This was a retrospective study in which records of patients who underwent descemetopexy with either air or 20% sulfur hexafluoride (SF6) between 1st July 2014 and 30th June 2017. Grade of cataract, type of surgery, visual outcomes, and site of DMD were recorded.

Descemet’s membrane detachment (DMD) is a well-recognized and potentially vision-threatening complication of cataract surgery. It occurs when fluid enters the corneal stroma through a break in Descemet’s membrane (DM) or an area of separation between the DM and the corneal stroma. Acute loss of vision from severe corneal edema can be the first sign and may also be the cause of a delayed diagnosis.1 After its earliest descriptions by Samuels and Scheie, DMD has been studied further in greater detail.2, 3, 4, 5, 6

The presence of Descemet’s membrane tags or scrolls along the interior lip of the sclera-corneal incision has been noted, with an incidence determined by gonioscopy to be 11% to 42%.4 Small, subclinical detachments are likely to remain undetected and go unreported because they resolve spontaneously within days after surgery. However, larger detachments of DM can lead to more serious postoperative complications, making their identification and management an important part of the postoperative evaluation.

There is limited literature regarding the incidence of DMD in manual small incision cataract surgery (MSICS), which is by far the most common technique of cataract extraction in developing countries like India. Also, limited data is available about the efficacy of various substances used as tamponade, such as 100% air, viscoelastic material, 14% isoexpansile perfluoropropane (C3F8), and 20% sulfur-hexafluoride (SF6) in managing DMD in MSICS. Non-resolving DMD may need intervention in the form of the use of gas with the use of sutures, and finally corneal transplantation.4

This was a retrospective interventional study conducted on cases with DMD following cataract surgery who presented to a tertiary eye hospital in Uttarakhand, India during the period from 1st July 2014 to 30 June 2017. These patients had undergone either intracameral air or SF6 injections for DMD reattachment. Cases with less than one month of follow-up after descemetopexy and who underwent cataract surgery elsewhere were excluded.

On ASOCT, DMD was identified as a free-floating membrane in the anterior chamber behind the area of stromal edema. Cataract was graded according to Lens Opacities Classification System III. The extent of DMD was recorded in clock hours. Other details recorded were the type of gas used for intracameral injection, intraoperative and postoperative complications. Post-operative visual acuity and status of Descemet membrane detachment were also recorded.

Descemetopexy was performed in an operating room under local or topical anaesthesia. The procedure was performed under a microscope with all aseptic precautions. The choice of gas to be injected was based on the surgeon’s preference. With a 30 G needle mounted on a 5-ml disposable syringe, 100% air or 20% iso expansile mixture of SF6 was injected into the anterior chamber. The site of entry was in an area opposite the area of DMD or in the case of total DMD away from the site of detachment. The pupil was subsequently dilated with homatropine 2% to prevent pupillary block and increase in IOP.

On the first post-operative day, the patient was examined to assess the attachment of DM. ASOCT was also done to confirm complete reattachment. Intraocular pressure was assessed and any increase in intraocular pressure was managed with antiglaucoma medications. Standard postoperative treatment of tapering course of antibiotic- steroid drop was given for four weeks. The patient was reassessed at one week and one month. Descemetopexy was repeated with SF6 if DMD persisted on a post-operative day one. Figure 1 shows pre and post-operative slit lamp image of inferior DMD resolving after intracameral air injection.

All the descriptive parameters were noted in the form of mean and standard deviations. Differences between preoperative and postoperative parameters were considered to be significant at a p-value of <0.05. Statistical analyses were performed with GraphPad Prism 5.0 (GraphPad Software, Inc., San Diego, CA).

Out of the approximately 16000 MSICS and 900 phacoemulsification surgeries that were performed during the study period, a total of 23 eyes (0.14%) underwent descemetopexy for Descemet detachment repair. The mean age of the patients was 63.21 ±5.8 years. 20 cases (87%) were after manual small incision cataract surgery (MSICS) and three (13%) were post phacoemulsification. 13% (n=3) cases had pre-existing corneal opacity and 26% (n=6) cases had climatic droplet keratopathy. The demographics and clinical data are summarised in Table 1. The number of clock hours of DMD ranged from 3 to 12 hours with a mean of 6.9 hours. The most common site of DMD was total (34.8%), temporal (30.4%) followed by superior (26.1%) (Figure 2). 65% (n= 15) that underwent descemetopexy were recorded to have a cataract of grade 4 or higher (LOCS III) at the time of cataract surgery (Figure 3).

Poorer visual outcome (LOGMAR VA 1.5 or worse) was associated with a higher number of clock hours of DMD and denser cataract grades. No statistically significant difference was noted in the final visual outcomes between the intracameral SF6 and Air group (p=0. 938). Three cases required reintervention in the form of repeat intracameral SF6 injection. Two cases had a pupillary block on a post-operative day one, which was managed conservatively with intraocular pressure-lowering agents and cycloplegics. None of the eyes had a persistent increase in intraocular pressure. 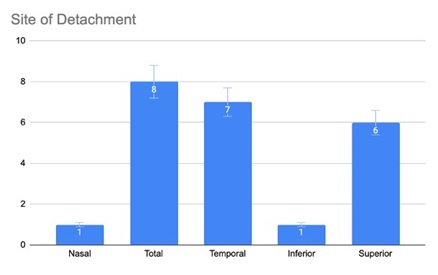 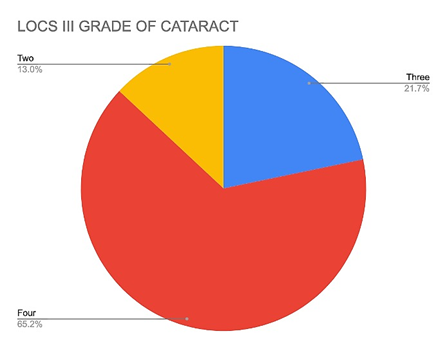 Demographic and clinical data of the patients that underwent descemetopexy

The primary aim of any cataract surgery is an improvement in visual acuity and patients expect excellent vision almost immediately. DMD can result in a significant visual impairment which can be reversed with timely intervention. Anterior chamber injection of gas as the primary management strategy has been well described. It can hasten the absorption of corneal oedema and, thus, visual recovery.2 Several authors have found that DMD was most commonly associated with MSICS.3, 5 Since most of the patients in our study had MSICS a greater number of patients (86%) were found to have DMD in this group. In these patients, the most common site of DMD after total detachments was temporal followed by superior. This is because we constructed the main incision and scleral tunnel temporally or superiorly. Improper incisions or inadvertent movements at the main incision during the surgery may be responsible for these cases of DMD. In our series, we found poorer visual outcomes were seen with higher grades of cataracts. This may be attributed to the larger size of the nucleus causing difficulty in nucleus delivery. A higher rate of DMD was also seen in patients with pre-existing corneal opacity or climatic droplet keratopathy, highlighting the inherent weakness in the adhesion of DM to stromal layers in patients with pre-existing corneal pathology. We recommend such cases should be performed by trained surgeons and one must be cautious in each step to prevent DMD from occurring in such cases.

Pneumatic descemetopexy using air has been considered as a weaker method in some case studies.8 In a large case series, Jain et al have reported better outcomes with air and a reduced incidence of a pupillary block with air.4 However, in our series, we found comparable results in the air and SF6 group.

The main drawback of the study is the limited number of patients to compare between intracameral air and SF6. A randomized controlled trial is warranted to understand the effectiveness of each of these for the management of DMD. Another drawback is that we didn’t incorporate the cases of DMD which occurred and were managed intraoperatively during cataract surgery.

This study highlights the importance of identifying important preoperative risk factors like cataract grading and pre-existing corneal pathology, that increase the chance of DMD during cataract surgery. Moreover, early postoperative intervention with either air or SF 6 can help achieve good final anatomic and visual acuity outcomes in patients developing this complication.