Kaur, Khurana, Chawla, and Dahiya: A comparative study of divide and conquer, stop and chop and phaco chop techniques of nucleotomy in phacoemulsification

A comparative study of divide and conquer, stop and chop and phaco chop techniques of nucleotomy in phacoemulsification

Background: Phacoemulsification is a variant of extracapsular cataract extraction surgery which is the gold standard treatment modality for cataract surgery nowadays. The common nucleotomy techniques of phacoemulsification are divide and conquer, stop and chop and phaco chop.

Aim of this study to compare different techniques of nucleotomy during phacoemulsification with respect to corneal endothelial cell loss, central corneal thickness (CCT) and comment on their merits and demerits.

Materials and Methods: 60 patients undergoing cataract surgery by phacoemulsification were randomly divided into three groups of 20 each (Group A, B and C) who underwent nucleotomy by divide and conquer, stop and chop and phaco chop technique respectively. The preoperative endothelial cell density and central corneal thickness were recorded using Topcon SP3000P non-contrast specular microscope. All patients were followed up at 1st, 4th and 12th week after surgery and evaluated for vision, slit lamp examination, endothelial cell count and central corneal thickness.

Results: The age group of patients studied was 50-80 years, where maximum number of patients were in 51-60 years age group. Out of 60 patients, most common morphological type of cataract was nuclear (40%) cataract followed by cortico-nuclear (36.67%) cataract. After 1 week of surgery, drop in endothelial cell density was 7.06% in Group A, 6.49% in Group B and 6.84% in Group C patients. A further slight decrease in endothelial cell count was recorded during 4th week and on final follow up visit at 12 weeks after cataract surgery, there was an endothelial cell loss of 9.51%, 10.9% and 11% in Group A, B and C respectively. The central corneal thickness at 1st postoperative week increased by 2.75%, 2.35% and 2.20% in group A, B and C respectively. Further evaluation of CCT at 4th and 12th week after surgery showed the values to be almost same as preoperative values. The rate of complications, which mainly included postoperative keratitis, mild anterior uveitis and cystoid macular edema, were found to be almost the same in all the three study groups.

Conclusion: All the three nucleotomy techniques of phacoemulsification i.e divide and conquer, stop and chop and phaco chop are equally efficacious in terms of CCT changes, endothelial cell loss and complications rate in the hands of an experienced surgeon.

Blindness is a global problem with 180 million visually disabled person worldwide; of whom 45 million are blind.1 In developing countries like India, main causes of blindness are cataract, infectious disease, xerophthalmia, injuries and glaucoma; whereas in developed countries these are Age Related Macular Degeneration (ARMD), Diabetic Retinopathy (DR) and cataract.2

Cataract is an opacification of the crystalline lens of eye which can be congenital or developmental and acquired.3 Most common type of cataract is senile cataract which is age-related, for which direct etiological agents are not known.4 Factors associated with increased risk of cataract are cigarette smoking, ultraviolet-B light exposure, alcohol intake, diabetes, steroids, ocular surgery and trauma. Aging causes nuclear, cortical and posterior subcapsular opacifications; each to varying degrees.5

Cataract is the leading cause of curable blindness throughout the world.4 Cataract surgery has undergone significant changes over the years from couching to intracapsular cataract extraction (ICCE) to conventional extracapsular cataract extraction (ECCE) to small incision cataract surgery (SICS). Phacoemulsification is a variant of ECCE, which was introduced by Charles Kelman in 1967 and rapidly gained importance in 1980s. It is a suture less technique in which an ultrasonic hand piece containing piezo-electric crystal in the titanium needle is used, which vibrates at an ultrasonic speed of 4000 per second and emulsifies the nucleus. The common nucleotomy techniques used in phacoemulsification are divide and conquer, stop and chop, direct chop or phaco chop.. Divide and conquer method involves trenching of the nucleus and dividing it into four quadrants, which are individually emulsified and aspirated. The stop and chop technique is based on first making a crater, to allow some nucleus removal, followed by chopping. In phaco chop, phaco tip is buried into nucleus and then it is chopped into pieces using a chopper. After nucleus management, epinucleus and cortical matter is aspirated via bimanual irrigation and aspiration. Thereafter PCIOL is implanted in the capsular bag.6

Intraocular surgery forms one of the major causes of corneal endothelial injury. In phacoemulsification, the endothelial damage has been attributed to mechanical injury caused by anterior chamber instrumentation and/or anterior chamber manipulation of a hard lens nucleus, to the ultrasonic vibration, to the heat generated by ultrasonic tip, and to prolonged intraocular irrigation. In early studies, cataract extraction performed by phacoemulsification or a similar method generally resulted in greater endothelial cell loss (30 – 40%) than more conventional forms of extraction. This has however come down significantly with the use of currently available apparatus and viscoelastic materials. After surgical trauma, damaged area is covered by means of cell migration. Mild to moderate trauma may occur during intraocular surgery, which can lead to temporary increase in corneal thickness, as measured by pachymetry. Factors predisposing to the development of corneal edema following cataract surgery are: Pre-existing corneal endothelial disease, moderate to severe mechanical trauma to endothelium during surgery, excessive inflammation or prolonged elevation of intraocular pressure (IOP) in the post-operative period.

A comparative analysis on corneal endothelial cell loss and central corneal thickness was done in 60 patients undergoing cataract extraction by phacoemulsification in Regional Institute of Ophthalmology, PGIMS Rohtak. These 60 patients were randomly divided into three groups of 20 each who underwent a different method of nucleotomy during phacoemulsification and were operated by the same surgeon.

Group A: 20 patients who underwent nucleotomy by divide and conquer technique

Group B: 20 patients who underwent nucleotomy by stop and chop technique

A detailed history regarding name, age, sex and duration of diminution of vision, coloured halos, diplopia/polyopia was recorded. Past history of any ocular trauma, any local eye infection or previous ocular surgery was taken. Each patient underwent pre-operative evaluation including general physical examination, BCVA, detailed slit lamp examination, NS grading, fundus examination, IOP measurement by GAT and regurgitation test to check the patency of nasolacrimal duct. The hardness of the nucleus was clinically graded, depending upon its colour on slit lamp examination as follows:

All patients were followed up on Post-op day 1 and later after 1 week, 4 weeks and 12 weeks post-operatively. On every visit, BCVA was tested and a complete slit-lamp examination was carried out. Specular microscopy was done using the non-contrast specular microscope TOPCON SP 3000P to assess the corneal endothelial cell count and central corneal thickness at 1st, 4th and 12th weeks of follow-up.

At the end of the study, the data was compiled and tabulated in Microsoft Excel spread sheet. Then statistical analysis of data was done with SPSS (Statistical Package for Social Sciences) ver. 21.0. The data was analysed using the Student’s paired t-test for intragroup and independent t-test for intergroup comparisons.

As far as laterality was concerned in Group A, 13 right eyes were operated, in Group B 11 right eyes and in Group C 8 patients had their right eyes operated. While left eye was operated in 7, 9 and 12 patients of Group A, B and C respectively. 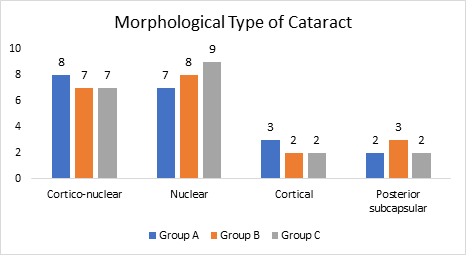 Nuclear sclerosis grading was done by slit lamp examination in each patient. The nuclear hardness was more in nuclear and cortico-nuclear cataract while pure cortical and posterior subcapsular cataracts had lesser degree of nuclear changes. 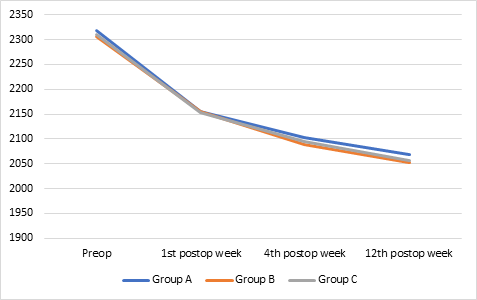 Cataract surgery is the most commonly performed intraocular surgery and phacoemulsification is the most preferred technique worldwide. It involves the fragmentation of cataractous lens by ultrasonic probe followed by irrigation and aspiration of lens fragments. The nucleus can be managed by various techniques, referred to as “nucleotomy”, most common being divide and conquer, stop and chop and direct phaco chop. The divide and conquer is more primitive and considered safest in the hands of beginners while Nagahara’s phaco chop has a longer learning curve; but considered as “future of cataract surgery”. Numerous studies have been done to compare these techniques with ambiguous results and no study has compared these techniques simultaneously, therefore we conducted this study into 60 patients and dividing them into 3 groups of 20 each and subjecting them to phacoemulsification by one of three nucleotomy techniques: Group A, B and C underwent nucleotomy by divide and conquer, stop and chop and direct phaco chop respectively. All patients were then followed up at 1st, 4th and 12th week of postoperative period to compare their CCT and endothelial cell count by specular microscopy and subsequent statistical analysis was done.

In our study, cortico-nuclear and nuclear type of cataract were found to be predominant morphological type of cataract. Out of 60 patients, nuclear cataract was seen in 40% (24) cases while cortico-nuclear cataract was seen in 36.67% (22) cases. Taking both these together, 76.67% patients had significant nucleus hardness as a component of senile cataractous changes which is in concordance with the findings of Framingham Eye Study, which concluded nuclear opacities to be the most commonly seen changes.9

The visual status of all patients was evaluated at 6 weeks of surgery first and then again at 12th postoperative week and were prescribed spectacle correction, both spherical and cylindrical. A BCVA of 6/9 was seen in 18.33% patients of Group A, and 20% patients of Group B and C patients. The similar outcome was seen in a study conducted by Starr Paulson et al where 60 patients were divided into 2 groups: one underwent cataract surgery by divide and conquer and the other by phaco chop.10 However, visual acuity of individual group was not consistent with Ruit S et al., in which 98% of patients in phacoemulsification group had a BCVA of 6/18 at 6 months of postoperative follow up.11

All patients in this study underwent CCT evaluation by specular microscopy preoperatively and postoperatively at 1, 4 and 12 weeks of follow up. The mean preoperative values were 0.501±0.023 mm in Group A, 0.494±0.016 mm in Group B and 0.498+0.016 mm in Group C. After 1 week of phacoemulsification, CCT was 2.75% higher than preoperative value in group A, 2.35% in group B and 2.20% in group C with statistically insignificant intergroup difference (p>0.05). Further, comparison of CCT at 4th and 12th week was made and it was seen that the value returned to almost same as preoperative ones at 4th week and equal to preoperative values at 12th week of follow up. The similarity in three groups is supported by a study conducted by Paulson S et al., who compared phaco-chop and divide & conquer and found no statistically significant difference in CCT change at 3 months postoperatively.10

The initial increase in CCT at 1st week in three groups is attributed to the mechanical injury caused by anterior chamber instrumentation, ultrasonic vibration, heat generated by ultrasonic tip and prolonged intraocular irrigation. Srinivisan et al. concluded in their study that there was an initial loss of endothelial cells, increase in CCT and changes in cell morphology and these values returned to normal within 3 months of surgery.14

All three techniques of nucleotomy in phacoemulsification i.e divide & conquer, stop and chop and direct phaco chop are equally efficacious. The degree of endothelial cell loss and central corneal thickness changes in all three methods are almost similar in the hands of an experienced surgeon.

The author declares no conflict of interest.