Professor and Director of Institute

Purpose: To assess the impact on intraocular pressure (IOP) after Phacoemulsification (PE) with Posterior Chamber Intraocular Lens (PCIOL) implantation and its relation with ocular biometric parameters.

Cataract surgery is one of the oldest surgical procedures in ophthalmic history, first documented in the fifth century BC.1 This surgery has gone through different revolutions like couching, Intra Capsular Cataract Extraction(ICCE), Extra Capsular Cataract Extraction(ECCE) and Phacoemulsification introduced by Dr Charles Kelman2 in 1967. Different studies publicized that cataract surgery has IOP lowering effect in normotensive and glaucomatous eyes.3, 4, 5 It is an effective procedure to control the IOP and help to decrease the number of antiglaucoma drugs.4, 6 Recent studies show that PE with PCIOL implantation surgery reduce the IOP and it is proportional to the presurgical IOP.7, 8, 9 There are some preoperative factors associated with postoperative IOP reduction.7 Modern innovative and high-quality technology like Optical Coherence Biometer (IOL Master), Goldmann Applanation Tonometer (GAT), and Pachymeter help us measure the various ocular parameters both pre-operatively and post-operatively. In this study, we have attempted to identify the Effect of PE with PCIOL implantation surgery on postoperative IOP and the relation between different preoperative ocular biometric parameters with post-operative IOP change like preoperative IOP, CCT, AL, and AL ACD.

A prospective observational study was done in Bangladesh Eye Trust Hospital, Dhaka, from 1 January 2017 to 31 December 2019. The study population included 524 eyes of 524 patients having age-related cataracts with normal IOP (11-21mmHg). They have undergone eventless PE with PCIOL implantation surgery approved by the review board of Bangladesh Eye Hospital and Institute, Bangladesh. The patient was selected purposively, and informed written consent were taken. Exclusion criteria include a patient having pediatric cataract, glaucomatous eyes, complicated cataract, systemic disease, retinal disease, traumatic cataract and per operative complications. A brief history of the patient, including medical, surgical, ophthalmic, family and drug history, were taken. All patients were gone through a detailed slit lamp examination, including dilated fundoscopic examination. Best Corrected Visual Acuity (BCVA) was examined the day before surgery and one month after surgery by Snellen chart and LogMAR chart. GAT measured preoperative and post-operative IOP in the morning between 10-12am with proper maintenance of sterilization. Optical Coherence Biometer measured ACD and axial length; Pachymeter measured CCT. The Patients were not allowed to use any topical medication before surgery except the dilating drop. After surgery, each patient was treated with topical 0.5% Moxifloxacin, 1% Prednisolone acetate and 0.1% Diclofenac sodium eye drop for six weeks.

IOP was measured at the same time in the non-treated fellow eye. The patient follow-up was done on the 1st POD and one month after surgery for all the cases. All data were analyzed by a statistical software package (SPSS 18.0). Changes of a score at different time points (preoperative, 1st POD, one month after surgery) were analyzed by ANOVA with Bonferroni corrections. A p-value of <0.05 was considered statistically significant. The results were given in numbers and percentages for qualitative variables and mean and standard deviation for quantitative variables. Paired t-test was used to determine the changes in different preoperative and post-operative biometric parameters.

Pre-operative pupillary dilatation was made by Tropicamide 1% and Phenylephrine, 2.5% combination, drop every 15 minutes interval for 45 minutes in the operated eye. The peribulbar block was given using 3 ml of 0.5% Bupivacaine and 5 ml of 2% Lignocaine mixed with 150 IU of Hyaluronidase. With all aseptic precaution, a side-port incision was given first 45 degrees from the main incision. Trypan blue were inserted and kept for 30 seconds, and washed thoroughly. Hydroxy Propyl Methyl Cellulose 2% (HPMC) were given to form the A/C. A temporal clear corneal two planner incision was provided by a 2.4 mm keratome at 9 o’clock position for the Right eyes and at 3 o’clock position for the left eyes. A controlled circular continuous curvilinear capsulorhexis of about 4.5-5 mm was done with the help of cystotome and /or capsulorhexis/forceps. Proper hydro dissection and gentle nucleus rotation were done. Then/sculpting and nucleus management was done by the modified stop and chop method. The cortical matter was aspirated by a bimanual cannula. Foldable in bag IOL implantation was done for all the cases. The OVD was cleared with the bimanual method by placing the irrigation cannula behind the IOL in a very low parameter. Then stromal hydration was done to seal the wounds, and intra-cameral ceftazidime, 1 mg in 0.1ml, were given as prophylaxis. Incisions left sutureless. All surgeries were done with an INTREPID Micro-coaxial system using the Infinity Vision System by one skilled surgeon using the same quality lens and same procedure.

[i] Data were expressed as mean ± SD

In the first column of the Model Summary (Table 3), the output will yield Pearson’s (in the column labelled “R”), followed in the next by r-square (r2). Statistics computed an adjusted r2 for those interested in using that value. R-square is PRE (proportional reduction in error) statistic that reveals the proportional reduction in error by introducing the dependent variables. In this case, r2=0.921, which means 92.1% of the variation in preoperative IOP and postoperative IOP is explained by the variation in mmHg of IOP. So 92.1% post-operative reduction of IOP is proportional to preoperative IOP. 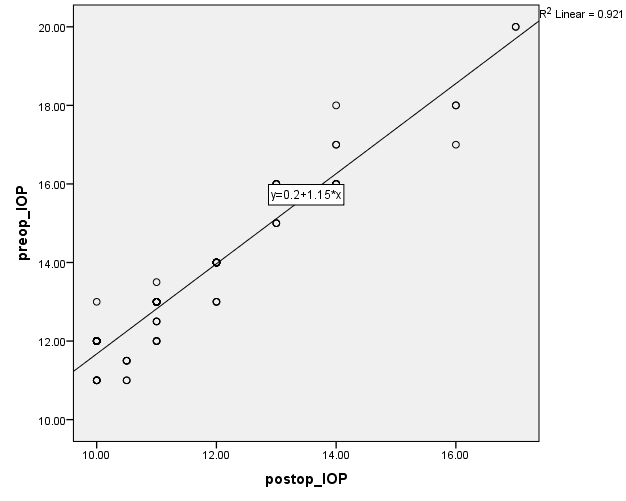 Cataract surgery is highly successful in restoring vision. It is established that there is significant IOP reduction after cataract surgery without any combination of filtering surgery8, 10, 11 which correlate with this study. In this study, the average age was 63.88±4.3 years, while another study shows the average age is 67.1±4.3 years12 and the male-female distribution was 61% and 39%, which is similar in the Asian region.4, 12 Several hypotheses have been proposed to explain the Effect of IOP reduction after cataract surgery.13, 14 Examples are the decrease in aqueous production due to increased ciliary body stimulation, increased preoperative prostaglandin production, and increased aqueous outflow due to widening anterior chamber angle during surgery. But there has been no confirmed explanation for this effect.8, 12, 15 The reported mean post-operative IOP reduction was 1.8± 3.5 mmHg (Guan, H. et al.),7 1.5 mmHg (T. Zeyen et al.)16 and 1.6mm Hg (Hyun Seung Yang et al.).12 This study also supports the result and finds that the IOP reduction was 1.90±0.61mmHg. Many studies have tried to find out a relationship between pre-operative ocular biometrics with post-operative IOP change.7, 12, 17, 18 Issa et al.19 reported that post-operative IOP could be presumed by the relationship between preoperative IOP and ACD before surgery. Poley BJ et al.8 also showed that Phacoemulsification with PCIOL implantation has a long term effect on post-operative IOP in normotensive and ocular hypertensive eyes. Another study shows that ACD is associated significantly with post-operative IOP change 12. Our analysis shows that ACD increased (3.27±0.24 Vs. 3.66±0.27 mm) post operatively in treated patients and also support the conclusion that a reduction in IOP is significantly associated with preoperative IOP and ACD (p<0.001). Due to technical constraints, we could not show the relationship between change in lens thickness, iris thickness, anterior chamber area and angle opening distance with post-operative IOP.

CJ Augustinus T Zeyen The Effect of Phacoemulsification and combined phaco/glaucoma procedures on the intraocular pressure in open-angle glaucoma. A review of the literatureBull Soc Belge Ophtalmol20123205166