We report case of a 24-year-old man, who presented with sudden unilateral visual loss after watching streetside laser light show. The Best Corrected Visual Acuity in his left eye was 6/60 with Snellen Visual Acuity Chart. Fundoscopic examination demonstrated a preretinal haemorrhage in the left eye over the macula. Optical Coherance Tomography demonstrated subhyaloid and Sub Internal Limiting Membrane localization of the haemorrhage. Patient was unwilling for the surgical intervention advised. With conservative management, the patient’s vision improved to 6/18 in the same eye with resolution of haemorrhage and Retinal Pigment epithelial atrophy at the macula.

Lasers propagate a beam of light that is monochromatic, coherent and highly directional, and a laser beam transmits high energies to a focused area, even at large distances.1

The last few years have seen a spurt in usage of green lasers in medicine as well as entertainment industries, thereby increasing the risk of unintended retinal exposure causing accidental laser injury.

A 24-year-old male, presented with sudden diminution of vision in his left eye after watching a green laser light show during streetside festival celebrations.

The patient reported to the Out Patient department of a tertiary eye care centre in Pune, two days after the sudden loss of vision. The best corrected distance visual acuity (BCDVA) in his left eye was 6/60 on Snellens Visual Acuity Chart. Anterior segment examination was unremarkable. Dilated fundoscopic examination demonstrated a boat-shaped preretinal haemorrhage at the fovea in the left eye (Figure 1) while the right eye was normal. Intraocular pressure was within normal range. Spectral domain optical coherence tomography (SDOCT) demonstrated a sharply demarcated hyperreflective dome shaped lesion corresponding to a haemorrhage in the subhyaloid and sub Internal limiting membrane (ILM) space. SDOCT image of the same could not be retrieved. Due to the presence of a sub ILM Bleed, YAG hyaloidotomy was not considered for the patient and was advised vitreoretinal surgery in the form of pars plana vitrectomy with ILM Peeling. The patient was unwilling for the surgery despite counselling him. Hence, the patient was managed conservatively and was started on oral vitamin C Supplementation (500 mg BD) alongwith Eyedrop Nepafenac 0.1 % TDS.

Two week after the first visit, his BCDVA was 6/18 on the Snellens Visual Acuity Chart in the left eye. Fundus examination showed presence of a dense,dehaemoglobinized clot over macula. (Figure 1) SDOCT showed the presence of a resolving subhyaloid haemorrhage. (Figure 2)

Two months after the injury, the patient’s visual acuity continued to be 6/18 in the left eye.

A 10-2 Central Threshold test was done for the patient at two months showing the presence of area of decreased light sensitivity at fovea. (Figure 3)

Fundus photograph of left eye on presentation, 2 weeks and 2 months 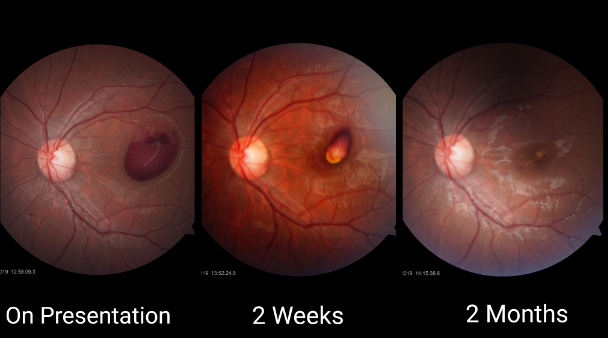 SDOCT of left eye at 2 weeks and 2 months 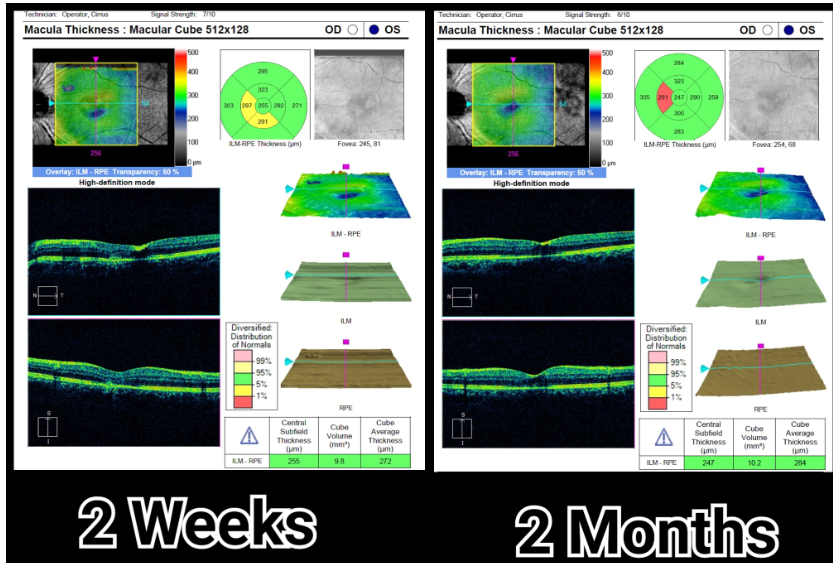 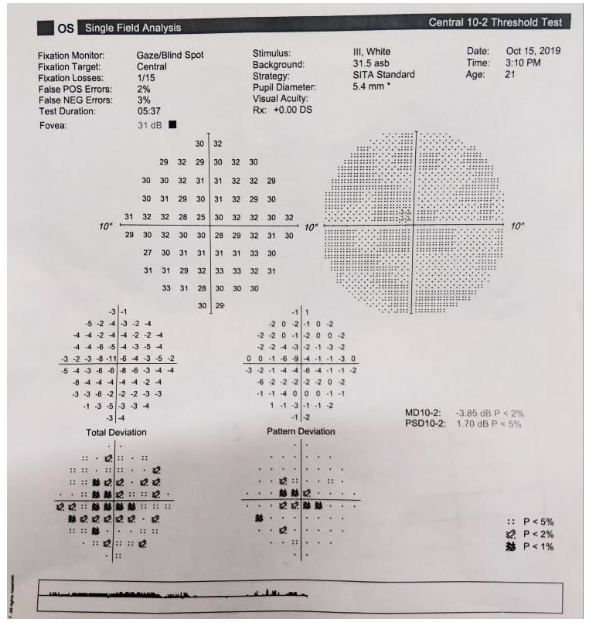 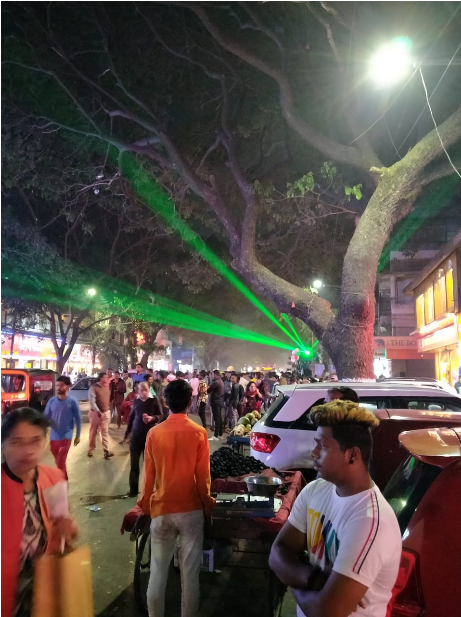 Lasers are divided into four classes based on their power and energy, of which Class 1 lasers are the safest.1 As per the Food and Drug Administration (FDA) guidelines of the United States, laser products that can be used for recreational purposes are limited to hazard Class 3A. Laser light show manufacturers must submit a variance request for FDA approval in order to sell and operate higher class (Class 3B and 4) equipment.

There are three laser tissue interactions by which laser beams cause retinal damage: photothermal, photodisruption, and photochemical. Photothermal damage is a consequence of the absorption of laser energy by tissues, mainly melanin in the RPE cells. Photodisruption occurs by the impact of a rapid , high energy laser beam on a tissue.

Retinal damage by a laser beam is not determined only by its power, but also by its wavelength, spot size, duration of exposure, and localization.2

There are few reports in literature about retinal injury due to recreational laser use. Robertson and his colleagues showed that a Class 3A green laser pointer is capable of causing retinal damage with exposures as short as 60 seconds.3

Rukiye Aydin et al., discussed a case of green laser injury in a 9-year-old boy, resulting in the formation of a foveal cyst. 1 Carla Rocio Perez-Montano et al., highlighted the case of a 23-year-old man briefly exposed to laser beams during a music festival who then presented with subhyaloid and subinternal limiting membrane macular haemorrhage. 2

Ali Dirani et al., reported bilateral drusenoid like macular lesions in a 13-year-old boy after exposure to a laser pointer.4

Ever since the first laser was developed in the 1960s, laser products have permeated the society with a wide variety of applications in military, industrial, laboratory, medical, and recreational settings.5 (Figure 4 )shows a busy city street with green lasers projected during festivities. The recreational use of lasers should be more strictly regulated to prevent irreversible ocular damage. Proper guidelines and their enforcement would be highly recommended.