We report a case of a 19-year-old Indian male with stage 2 Coats’ disease who was managed with monthly intravitreal biosimilar ranibizumab injections (n=3) along with laser photocoagulation in the right eye. Post-treatment, significant reductions were seen in the exudation, angioma-like lesions, central macular thickness and edema in the retina. At the last follow-up at 9 months after intravitreal biosimilar ranibizumab initiation, distant vision improved from best corrected visual acuity (BCVA) of 5/60 at baseline to 6/18, and near vision from ‘not able to read’ to N/12 in the right eye.

A 19-year-old man presented with diminution of vision in both eyes since 6 months. There was no past history of any significant ocular disease.

On examination, the best corrected visual acuity (BCVA) in the right eye was 5/60 with counting of fingers close to the face (CFCF) in the left eye. Examination of the fundus demonstrated a large area of sub-retinal exudation and multiple angioma-like lesions in the center of exudation in the entire fundus in both eyes (Figure 1). The fundus fluorescein angiography (FFA) demonstrated leaking aneurysm-like vascular anomalies (Figure 2) and optical coherence tomography (OCT) showed collection of intraretinal and subretinal fluid in both eyes (Figure 3). The central macular thickness (CMT) was 691µ and 317µ in right and left eye, respectively. The diagnosis was made as stage 2 Coats' disease.

After the first intravitreal biosimilar ranibizumab injection, his BCVA improved to 6/24, and edema was reduced to some extent; no significant improvement seen after the second injection. After 3 months, significant improvement was demonstrated in vision with BCVA of 6/18, and a significant reduction in the exudation, edema in retina and angioma-like lesions (Figure 4) was reported in the right eye. Also, a reduction in the CMT from 691µ to 339µ was observed and the OCT demonstrated uneventful recovery in the right eye (Figure 5). In the left eye, the vision remained same whereas CMT increased from 317µ to 672µ.

The patient’s last follow-up done in October 2018 demonstrated improved distant vision of 6/18 from the baseline (January 2018) vision of 5/60 and improved baseline near vision from not able to read to N/12 vision in the right eye. There were no improvements in the distant or near visions in the left eye. 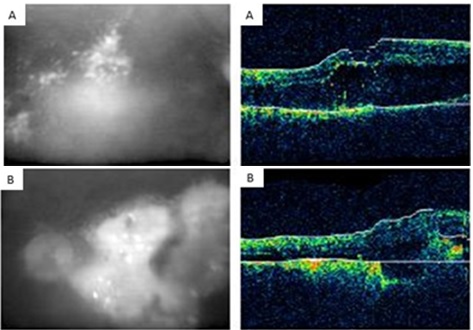 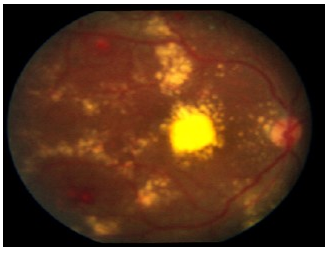 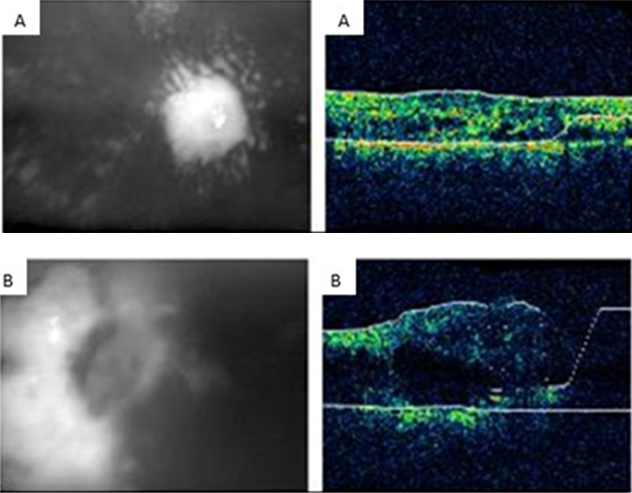 Anti-VEGF agents have modernized the treatment of several retinal diseases in adults including diabetic retinopathy and are also used in children.6, 7 Bevacizumab, an anti-VEGF, has been studied extensively in managing Coat’s disease but its use is associated with a risk of vitreoretinal fibrosis and tractional retinal detachments, hence, should be used with caution.8 Ranibizumab, an anti-VEGF, has been approved for the treatment of several macular disorders including wet age-related macular degeneration (AMD), retinal vein occlusion (RVO), diabetic macular edema (DME), and myopic choroidal neovascularization (CNV).9, 10 Ranibizumab has also been evaluated for the treatment of Coats’ disease in children in previous reports. 3, 11, 12 We report the successful management of Coats’ disease with adjuvant intravitreal biosimilar ranibizumab injection along with laser photocoagulation. The use of anti-VEGF agents may enhance the activity of laser therapy by decreasing the vascular permeability of the capillary endothelial cells.13

The treatment goal in the Coats’ disease is focused at managing the telangiectatic vessels to control and resolve intra and sub-retinal exudates and eventually vision salvation.2 The patient, in the present case-scenario, demonstrated vision recovery in the right eye where both intravitreal biosimilar ranibizumab and laser therapy were employed compared to no improvement in the left eye, which was managed using laser therapy only. Furthermore, biosimilar ranibizumab treatment showed reduction in intraretinal and subretinal exudation, multiple angioma-like lesions, telangiectasis as well as in the dilation of retinal vessels in our patient. There were no injection-related ocular or systemic adverse events during treatment and follow-up. Thus, the adjuvant administration of intravitreal biosimilar ranibizumab was appropriate in the present case-scenario.

Intravitreal ranibizumab combined with other ablative therapies was effective in visual acuity improvement from logMAR BCVA of 1.4±0.7 to 1.1±0.5 (P<0.001) in patients (n=17) with Coats’ disease. Also regression of telangiectasia and resolution of the exudate were observed. There were no severe ocular or systemic side-effects reported.12 Intravitreal ranibizumab plus conventional amblyopia treatment resulted in transient restoration of the hemato-retinal barrier and suppression of neovascularization amongst patients with Coats’ disease. This was propounded on the basis of resolution of iris neovascularization within 2 weeks of treatment with anatomical success.8 Giannakopoulos and colleagues reported the long-term results of Coats’ disease after treatment with ranibizumab and demonstrated a visual acuity of 20/20 with no exudates or edema at 20 months of follow-up; the patient was stable at 6 years of follow-up. 13

The case report development was supported by Intas Pharmaceuticals Ltd.

S Ghorbanian A Jaulim I P Chatziralli Diagnosis and Treatment of Coats' Disease: A Review of the LiteratureOphthalmologica2012227417582