Purpose: To evaluate the efficacy and safety of a dexamethasone implant in combination with intravitreal bevacizumab injection in the management of macular edema secondary to branch retinal venous occlusion.

Materials and Methods: 10 eyes were prospectively investigated. Each eye was treated with intravitreal bevacizumab followed by intravitreal ozurdex at a two-week interval. Recurrence of macular edema was treated with ozurdex only. Patient were evaluated preoperatively with BCVA, IOP, OCT and fundus evaluation and followed up at 15 days, 2months and 4months of ozurdex injection. Fallow up all patient for 1 year duration.

Results: Mean BCVA at presentation was 0.81 log mar, and that improved to after 15 days of intravitreal bevacizumab was 0.55 log mar. At 15 days, 2 months and 4 months of intravitreal ozurdex implantation mean BCVA was 0.54logmar, 0.54 log mar and 0.6logmar respectively. Mean central foveal retinal thickness at presentation was 538 µm and reduced to 235 µm, after intravitreal bevacizumab. At 15 days, 2 months and 4 months after intravitreal ozurdex implantation mean central foveal retinal thickness was 182.14 µm, 189.28 µm and 352.14 µm respectively. Mean Intraocular pressure (IOP) was elevated about 1 mm of Hg after bevacizumab, about 3 mm of Hg after 4 months of ozurdex with using single anti glaucoma medication and one patient had progression of cataract after 2nd injection of ozurdex.

Conclusion: Combined treatment of intravitreal bevacizumab and ozurdex shows better and a sustained functional outcome. Increased intraocular pressure and cataract formation can be potential concerns and should be monitored.

The pathogenesis of macular edema in RVO have been identified to be due to factors such as the hydrostatic effects from increased venous pressure, the presence of inflammatory cytokines (e.g., prostaglandins and interleukin-6), and the up regulation of endothelial tight junction proteins,1 and /or increased vascular endothelial growth factor (VEGF) expression.2 Common risk factors for RVO include arterial hypertension, hypercholesterolemia, diabetes mellitus, and glaucoma.3

Optical coherence tomography (OCT) is an important tool in the diagnosis of macular edema (ME).

Grid laser photocoagulation was shown to be benefit for treating ME in the branch vein occlusion study (BVOS) with limited in visual improvement.4

Anti-vascular endothelial growth factor (anti-VEGF) introduction has revolutionised the management of ME secondary to RVO provide short term visual benefit. Recurrent I is commonly encountered problem with intravitreal monotherapy, leading to the need of multiple injection. Few patients seems to develop resistant ME and can even develop increased or rebound ME after anti-VEGF therapy.5, 6, 7 Since the intravitreal dexamethasone implant (Ozurdex; Allergan, Irvine, CA) was recently approved for RVO,8 we used this treatment as combination with anti-VEGF.

We aim to study the combination therapy in our study.

Our study is prospective, consecutive, non-randomized case series,10 eyes of 9 patients with BRVO with ME, 6 males and 3 females (mean age 59.28 years) with maximum duration of symptoms of 4 months were included. 6 eyes presented with superior temporal quadrant BRVO and 4 eyes presented with inferior temporal quadrant BRVO. We excluded patients with a known history of glaucoma or steroid response, as well as history of vitrectomy and neovascularization in the anterior or posterior segment.

Informed consent was procured prior to recruitment in a consecutive manner. Each patient underwent detail eye examination include best corrected visual acuity (BCVA), anterior segment examination, intraocular pressure (IOP) and fundus examination. OCT (Spectral domain – primus Zeiss) scan was done each visit. Each patient received intravitreal bevacizumab at presentation and after 15 days intravitreal ozurdex was given. Central foveal thickness (CFT) and parafoveal thickness (PFT) was measured at the initiation of treatment, at 15 days, 2 months and 4 months after intravitreal Ozurdex implant. Second injection was considered for patients with recurrent edema at four months. Each patient fallow up done for period of 1 year as shown in the Table 1.

A total of 10 eyes of 9 patients (8 unilateral, 1bilateral were recruited.

The mean IOP at presentation was 14.71 mm of Hg, at two weeks of intravitreal bevacizumab was 15mm of Hg. At 15 days, 2 months and 4 months of intravitreal ozurdex mean IOP was 17mm of Hg, 16.42 mm of Hg and 16.28 mm of Hg with one ant glaucoma medication (Dorzolamide eye drops). 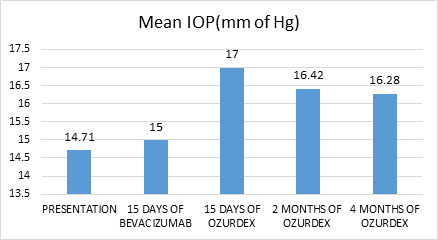 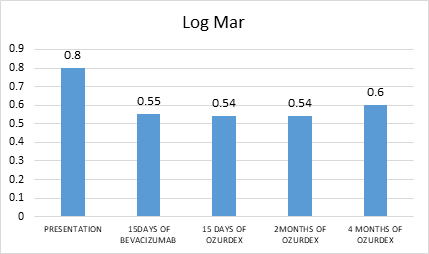 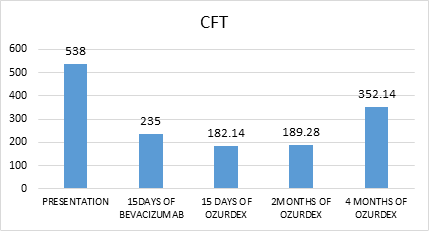 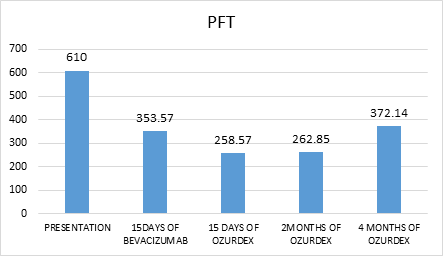 Out of 10 eyes 6 cases were pseudophakia, out of 4 phakic eyes 1 eye developed cataract after 2nd Injection of ozurdex. 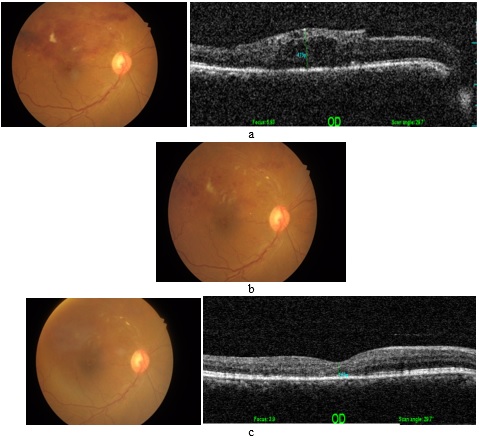 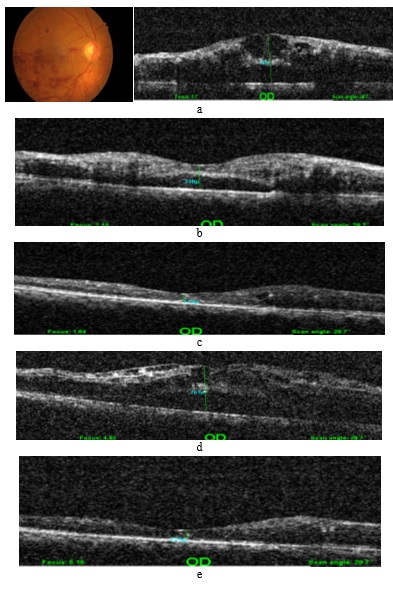 Presently macular edema due to BRVOis treated with three pharmacological drugs including anti-VEGF such as bevacizumab (Off label use) or ranibizumab, aflibrecept and a corticosteroid dexamethasone implant that is ozurdex.

In clinical trial, anti-VEGF such as ranibizumab revealed a beneficial effect on visual function and reduction in central macular thickness in eye with BRVO and diabetic macular edema.9 However, with respect to shorter half-life of ranbizumab,10, 11 numerous injections required to achieve and maintains the therapeutic effect. This is also valid for bevacizumab as shown by Epstein et al.,12 who performed injection every 6 weeks for 12 months with significant improvement of visual acuity and reduction of ME. Frequent intravitreal injection require frequent visits to the hospital and also risk of side effects and complications. Since the intravitreal dexamethasone implant (Ozurdex; Allergan, Irvine, CA) was recently approved for RVO,8 we used this treatment as combination with anti-VEGF. Which results in maintain ME with reduced number of injections and also reduced the number of patient visits. We aimed to evaluate the effect of combination of therapy in case ME due to BRVO. Initial intravitreal bevacizumab helps in reduction of ME. Ozurdex helps to maintain reduction in ME for longer duration. Combination therapy helps in reduced number of patient visit for procedures and monitoring visits and hence reduced cost of monotherapy.

We hypothesized that treatment with anti-VEGF will have an early impact and following the ozurdex implantation the effect is sustained. However the time interval for recurrence could not be prolonged, which is in contract to recent study of Singer et al.,13 Recurrence occurs after period of 3.2 and 3.8months and were in line with the known pharmacokinetics of the ozurdex implant and the results of Geneva trial, which revealed a decrease of treatment effect at about 3-4 months after implantation.14

Mayer et al.,15 studied efficacy and safety of dexamethasone implant alone or in combination with bevacizumab. 16 patients of BRVO were treated with intravitreal ozurdex and 12 patients with 3 consecutive bevacizumab injections fallowed by intravitreal ozurdex. Results noticed BCVA improved by 7.8(±2.9) letter with ozurdex and 9.4(±2.1) letters in combination group. In our series we used single injection of Bevacizumab with significant of improvement of vision. There is a benefit of combining the two agents for greater visual outcome.

Mayer et al.,15 observed an elevation of >5mm of Hg compared with the baseline in approximately 40% of patients, irrespective of treatment regimen. Whereas in our case series we are using single dose anti glaucoma drug (Dorzolamide eye drops) and noticed IOP rise of 3 mm of Hg with baseline at the end of 4 months. Although we had no uncontrolled rise of IOP based on our experience in this case series. We suggest exclude patient with known history of glaucoma and steroid response to the treatment. Dorzolamide is a topical carbonic inhibitor used to reduce IOP and CME. Reduction of ME is by supressing production of proinflammatory cytokines, interleukin-6.16 However, response is better in retinal pigmentary epithelial disease than in RVO.17

Michael A Singer13 et al., study showed mean changes in OCT measured retinal thickness decreased by 195 µm at 2 weeks after intravitreal bevacizumab, with additional 63 µm decrease seen at 4 and 6 weeks, with additional 40µm decrease seen at 2 months and at 4 months 124 µm increase in macular thickness after Ozurdex compare to baseline. The mean BCVA increased from 9.4 to 12.9 letters at 4weeks, 12.3 letters at 2months and back to 10 letters at 4 months.

In our case series also central retinal thickness decreased by 303 µm at 2weeks after intravitreal bevacizumab, with additional 53 µm at 4 weeks, 46 µm at 2 months and 117.14 µm increase at 4 months in macular thickness after ozurdex compared to baseline. We can expect a possible recurrence of edema at 4 months for most patients and review. Combination therapy showed that improvement in BCVA and macular thickness is sustained for four months and also increases the percentage of patients whose macula was essential fluid free compared with anti VEGF therapy alone.

Combined treatment of intravitreal bevacizumab and ozurdex shows better and a sustained functional outcome. Also reduced the number of visit and reduced the cost compare monotherapy.