We present a case series of late-onset Pseudophakic cystoid macular edema who presented 10 years to 4 years after cataract surgery with recent-onset diminution of vision. Their vision in the affected eye ranged from 6/24 with an OCT macular map showing multiple cystoid spaces suggestive of cystoid macular edema. Other causes for CME were ruled out. The central macular thickness ranged from 577 to 557 microns. All the patients received a single dose of 0.1ml of 4mg/ml intravitreal triamcinolone acetonide. On the first post-procedure day, all the patient's visual acuity had improved to 6/6 and OCT showed a significant reduction in central macular thickness to 387-301 microns. This improvement in vision and macular thickness persisted at 3 months follow up. Late-onset of pseudophakic cystoid macular edema is a rare cause of postoperative vision loss, economically and easily treatable with a single dose of intravitreal triamcinolone.

74 year old male patient presented with complaints of decreased vision in left eye for 3 months, which was gradual in onset and progressive. He had undergone cataract surgery 10 years ago in both eyes, following which he had regained good vision in both eyes. On examination, he was found to have a best corrected visual acuity of 6/9 in right eye 6/24 in left eye. Anterior segment was normal with well centred posterior chamber intraocular lens in both eyes. There was no evidence of Posterior capsular opacification. Fundus examination of the left eye was normal except for absence of foveal reflex. Fundus of right eye was normal. OCT left eye showed characteristic cystoid macular edema and central macular thickness (CMT) was 577 microns (Figure 1) A diagnosis of late onset pseudophakic cystoid macular edema was made. Patient was given a single dose of intravitreal triamcinolone acetonide 0.1ml of 40 mg/ml. On review after one week, the patient’s vision was noted to have improved to 6/6 and OCT showed reduction of cystoid spaces and central macular thickness of 387 microns (Figure 2) the patient has been followed up for 1 year and vision was has remained stable

60 year old male patient presented with complaints of decreased vision in both eyes for 3 months, which was gradual onset and progressive. There was history of cataract surgery of right eye 4 years back, following which he had good vision until 3 months ago. On examination, best corrected visual acuity in right eye was 6/24 and left eye was 6/18. Anterior segment examination revealed a well-placed PCIOL in right eye and immature senile cataract in left eye. Fundus examination of the right eye showed macular edema, while left eye fundus was unremarkable. OCT done in right eye showed characteristic cystoid macular edema and central macular thickness was 563 microns (Figure 3] A diagnosis of late onset pseudophakic cystoid macular edema was made and he was given a single dose of intravitreal triamcinolone acetonide 0.1ml of 40 mg/ml. On review after ten days, patient improved symptomatically, gained vision of 6/6 and OCT showed reduction of cystoid spaces and central macular thickness to 309 microns (Figure 4)The patient has been followed up for 18 months and visual acuity has remained stable with minimal changes in OCT picture.

60 year old male patient presented with complaints of decreased vision in left eye for 6 months, which was gradual in onset and progressive. There was also past history of cataract surgery 7 years ago in left eye, following which he reports good vision in that eye until 6 months ago. On examination, best corrected visual acuity in right eye was 6/36 in left eye was 6/24. Slit lamp biomicroscopy revealed immature senile cataract in right eye and a well centered PCIOL in left eye. Fundus examination was normal in right eye and in left eye showed absence of foveal reflex and loss of foveal contour. OCT done in left eye showed characteristic cystoid macular edema and central macular thickness was 557 microns (Figure 5) clinically diagnosed to have late onset pseudophakic cystoid macular edema. Patient was given single dose of intravitreal triamcinolone acetonide 0.1ml of 40 mg/ml. One week later, patient gained vision of 6/6 improved symptomatically and OCT showed reduction of cystoid spaces and central macular thickness had reduced to 301 microns (Figure 6) 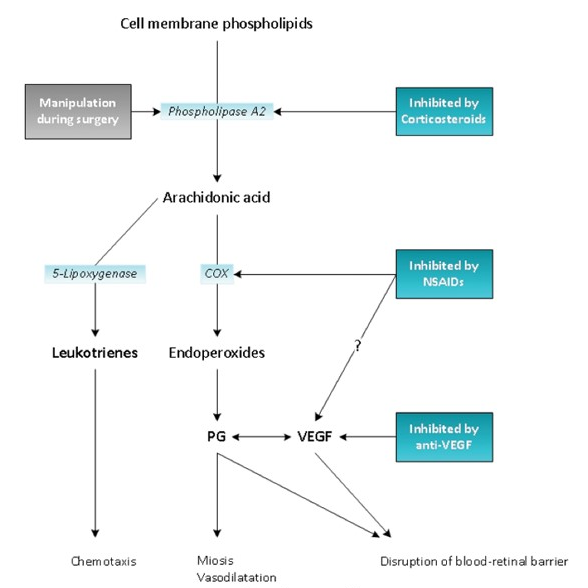 Pseudophakic cystoid macular edema (PCME) is due to an inflammatory response of retina which results in fluid accumulation in the outer plexiform layer of macula giving rise to cystic spaces.1

Very late onset PCME was defined by Mao & Holland when it occurs later than 5 years after surgery. There was increased incidence with ICCE/ surgical complication.2

It has been proposed that manipulation of ocular tissues within the anterior chamber during intraoperative period may lead to the release of arachidonic acid from uveal tissue, with the production of either prostaglandins (PGs) via the cyclooxygenase pathway (Figure 7 ) inflammatory mediators enters posteriorly into the vitreous to disrupt the inner blood–retinal barrier. Subsequently, it causes increased permeability of the perifoveal capillaries which eventually results in fluid accumulation within the macula.4

Intraoperative complications that predispose to PCME will be iris trauma due to excessive manipulation, posterior capsule rupture, vitreous loss, when vitrectomy done for retained lens fragments, use of anterior chamber IOLs and early postoperative capsulotomy for early posterior capsular opacification.3, 5

Other ocular factors which have been found to increase the risk of PCME includes diabetic retinopathy, uveitis, retinal vein occlusion, previous retinal detachment surgery and light toxicity of which the most common one was diabetic retinopathy.5 In our case series, other causes of CME were ruled out

Most patients with clinical PCME will present with defective vision following cataract surgery and on fundus examination show retinal thickening and loss of foveal reflex.6

With the advent of OCT (Optical Coherence Tomography) which allows non-invasive imaging of the retinal layers, diagnosing PCME has become easier. It is also a better method to follow up patients during and after treatment. In OCT, PCME is characterized by presence of retinal thickening, loss of the foveal depression and cystic hyporeflective lesions within the macula. OCT also allows the detection of vitreoretinal traction and lamellar holes6, 7 It can be confirmed using Fluorescein angiography, although this is rarely necessary nowadays. The common findings on FFA includes dilatation of retinal capillaries followed by leakage from ‘perifoveal’ capillaries and developing into the classic ‘petalloid’ pattern in established cases.8

Modern cataract surgery are associated with good visual outcome it is an efficient procedure However, despite recent surgical improvements, after PCME develops, vision may be suboptimal. Treating physician ought to know when and how to effectively treat this complication to ensure in favourable outcome

NSAIDS and Corticosteroids are commonly used either as monotherapy or combined therapy, as first-line treatment approach. NSAID inhibits the cyclooxygenase enzyme pathway and inhibits the release of inflammatory mediators. Whereas corticosteroids inhibits the phospholipase enzyme A2 in the arachidomic acid cascade and thereby reduces the production of prostaglandins. Therefore, it have antiangiogenic, and anti-inflammatory properties that make them an attractive therapeutic option for a variety of posterior segment diseases. 8

Triamcinolone acetonide (TA) is a synthetic steroid of the glucocorticoid family having fluorine molecule in its ninth position. It is a white crystalline powder, commercially available as an ester formation. It is most commonly used steroid agents for the several retinal conditions such as diabetic macular edema, retinal vein occlusion and uveitic macular edema. Its property of water insolubility aids in prolonged duration of action.9

Due to the availability of anti-VEGF agents and various complications such as cataract, steroid induced glaucoma its use is reduced in recent times with the However, it is an effective drug which can be easily administered and often has excellent, long lasting results. The main advantage being that it is very affordable (cost of 40mg/ml is Rs.65/ 0.89USD)

With regard to the dose of Triamcinolone acetonide, on reviewing various studies on literature showed that an adequate concentrations of TA provide therapeutic effects for about three months after 4 mg intravitreal TA injection. Maximum effect duration of 140 days has been reported with increasing dose of TA.10

A study by Audren et al. and Hauser et al. showed that the use of a 4 mg dose of intravitreal TA does not have significant advantages on visual acuity over when the lower 1 mg or 2 mg dose used.11, 12

Lam et al. published that a comparison study between 4 mg and 8 mg doses of triamcinolone acetonide showed that the higher dose i.e 8mg had a more sustained effect on both visual acuity and reduction in central macular thickness however had a trend to more ocular adverse effects.13

Therefore, when increasing the dose by using of about 20 mg of TA, the improvement in visual acuity was marked during the first three to six months after intravitreal injection and was observable for a period from six to nine months.14 Therefore, by using a dose of 4 mg, the duration in the reduction of macular thickness as measured by optical coherence tomography (OCT) was less than six months and will less ocular side effects.15 According to Haamann P et al., did a retrospective study in PCME patients, found that there was rapid improvement in visual acuity in 47 patients and on follow up 13 patients suffered a relapse and needed further IVT injections.16

In our case series, patients received a single dose of intravitreal triamcinolone acetonide 0.1ml of 40 mg/ml. One week to ten days after injection, all the patients gained vision of 6/6, improved symptomatically and OCT showed a significant reduction of cystoid spaces and central macular thickness.

Intravitreal injection of triamcinolone acetonide still has a role, due to its potent ability to reduce macular edema secondary to various causes such as postoperative, diabetes mellitus, retinal venous occlusions.11

With its low cost being the major advantage. Ocular side effects includes elevation of IOP, endophthalmitis, vitreous haemorrhage, retinal detachment.17 Therefore, patients should be monitored closely following intravitreal injection. Our cases had late onset PCME which improved with a single dose of triamcinolone to 6/6 which was unexpected. They have also maintained excellent vision upto 1 year post injection with minimal changes in OCT.