Prevalence and risk factors of retinopathy of prematurity in Western Maharashtra

Background: ROP is a disease of the developing immature blood vessels in the retina of premature new born by toxicity of oxygen. With the recent advances in neonatal care there has been improvement in rates of survival in premature infants. Factors playing a role in ROP are low gestational age, low birth weight and increased oxygen supplementation after birth.

Aims: To study the prevalence of retinopathy of prematurity and to determine its risk factors.

Materials and Methods: A prospective study was conducted in a tertiary centre from September 2018 to August 2020. 60 babies were screened with birth weight less than 1500 gms and gestational age less than 32 weeks. History was taken from parents and fundus examination was done. The grading of stages and zones was done. Data was entered in Excel and tests of statistical significance were used.

Results: The prevalence of ROP was 28%. ROP was seen in zone III in 70% and 47% had stage 2 ROP. Only 7% mothers had completed less than 28 weeks of gestation. The mean birth weight was 1.36 kgs. 71% of the ROP positive babies were delivered by normal vaginal delivery. 100% babies diagnosed with ROP had been subjected to oxygen supplementation. 47% babies developed sepsis whereas 76% babies had history of RDS.

Conclusion: ROP is a preventable cause of blindness in childhood. Early screening by an ophthalmologist is important to prevent this. The burden of ROP is bound to rise due to increased advances in the field of neonatology if screening protocols are not implemented stringently.

Retinopathy of prematurity (ROP) is a disease of the developing immature blood vessels in the retina of baby born prematurely caused by toxicity of oxygen. These blood vessels are abnormal which makes them fragile and friable. This causes leakage or bleeding, further leading to retinal detachment. This is the major cause of blindness in ROP.

ROP is seen in premature infants as in them retinal blood vessels have still an incomplete growth of vessels. As in various retinopathies like sickle cell retinopathy and proliferative diabetic retinopathy, oxygen plays an important role in ROP as well. Incidence of ROP has an inverse correlation with gestational age and birth weight. If oxygen concentrations are in an excess, it can cause vaso-constriction of retina. It has been observed that oxygen saturation is a controllable factor, which if kept low can prohibit the advancement of ROP.1

With the recent advances in the last decade in neonatal care there has been improvement in rates of survival in premature infants. Consequently, ROP prevalence is rising. Risk factors of ROP are low gestational age, low birth weight and increased oxygen supplementation after birth.

According to these risk factors screening of infants born less than 32 weeks gestation or 1500 grams is advised with adequate follow up.7 ,8 In India, ROP is the main reason of childhood blindness.9 Vision 2020 was introduced in 1999, in which five priority areas were set and childhood blindness was one of them. 10, 11

Screening for early identification of retinal damage should be performed preferably by ophthalmologist for early detection of this preventable blindness. Screening protocols are still lacking in India and other developing countries. This cause of blindness will only keep rising in these countries, if steps are not taken immediately to improve the screening protocols.12

This was a hospital-based prospective study conducted on patients attending the OPD of Dr. D.Y.Patil Medical College & Research Institute, Pune from September 2018 to August 2020. A total of 60 babies were screened for ROP. All babies with birth weight less than 1500 gms and gestational age less than 32 weeks were included in the study. Infants with congenital anomalies, chromosomal abnormalities, inborn errors of metabolism were excluded from the study.

After explaining the study to all the participants (parents) in detail written assent was obtained from all the participants. Detailed history was taken from parents including mechanical ventilation, apnoea, sepsis, intraventricular haemorrhage, surfactant therapy, anaemia, frequent blood transfusions, multiple birth, pulmonary insufficiency among others and documentation was done in the proforma.

The pupils of the babies were dilated using tropicamide 0.5% and phenylephrine 2.5% (after dilution). Topical anaesthetic (paracaine) was instilled and a paediatric wire speculum was applied. The fundus examination was carried out using indirect ophthalmoscope and the grading for the severity (stages) and location (zones) was done. The babies were called for follow up depending upon the severity of ROP.Statistical analysis

Data was entered in Excel and analysed using WinPepi software and was summarised using mean and SD. Appropriate tests of statistical significance such as chi-quare, test, paired t test were used.

Figure 1: Shows out of the 60 babies, 17 developed retinopathy of prematurity (ROP). So the prevalence of ROP in our study was 28%.

Table 3 : Shows that out of the 17 ROP positive babies, 13 (76%) babies had history of RDS whereas only 4 (24%) babies did not have history of RDS showing a very high positive co-relation between ROP and RDS. 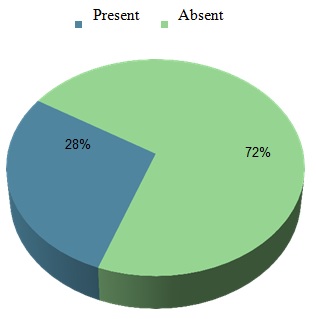 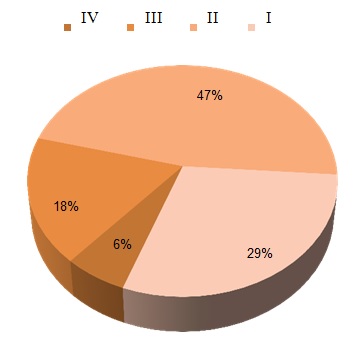 Co-relation between ROP an oxygen supplementation

Co-relation between ROP and sepsis

Co-relation between ROP and RDS

Co-relation between ROP and Blood transfusion

In our study we enrolled 60 babies who were delivered before 32 weeks of gestation and had birth weight of less than 1500 gms. They also received oxygen supplementation. We also studied the risk factors associated with this disease seen in these babies. In our study, the prevalence of retinopathy of prematurity was 17 (28%).

9 (15%) babies were having family history of retinopathy of prematurity (ROP), i.e history of ROP was present in siblings out of the 60 study subjects showing a positive association between family history and ROP. A larger study is needed to substantiate this association. Also, small subset of patient may have genetic predisposition to develop severe ROP due to abnormal Wnt gene signalling, or genetic polymorphisms, but this is still unclear.23

We study also found a significant association between family history of ROP and the enrolled patients developing ROP. However, this association needs to be studied further with larger multicentre studies which may throw light on some genetic predisposition.

There was no association in our study between gender, mode of delivery and hyperbilirubinemia with ROP. ROP is a very important and preventable cause of blindness in childhood. Screening for early identification of retinal damage done soon after birth by an ophthalmologist is important to prevent this blindness. As observed screening guidelines and protocols are lacking in developing nations like India. The burden of this disease is bound to raise due to increased advances in the field of neonatology if screening protocols are not implemented stringently.

In remote areas where specialists are not available more outreach programmes should be held to facilitate screening process. Telemedicine is coming up in a major way and a lot of studies are also being conducted to test its effectiveness in picking up cases of ROP in remote places and referring them to higher centres for management. The introduction of Retcam-assisted screening in developing economies facilitates screening and follow-up of the rural population and remote places where availability of an ophthalmologist is difficult. Team work by ophthalmologists, paediatricians and obstetricians is essential to prevent blindness due to ROP.

The International Classification of Retinopathy of Prematurity revisitedArch Ophthalmol200512379919

A H A A Hakeem G B Mohamed M F Othman Retinopathy of prematurity: A study of incidence and risk factors in NICU of Al-Minya University Hospital in EgyptJ Clin Neonatol2012127676