The diagnosis and follow-up of children with an ocular disease is more difficult than that of adults because of the challenge in obtaining reliable and reproducible visual examinations. Important diagnostic tools used in adults, such as visual fields, require their cooperation. For children, such tools are often impractical because the results are unreliable, and hence difficult to interpret However, OCT provides objective measurements of the affected structures. Generally, children older than 3 or 4 years of age can cooperate sufficiently. Macular measurements are even easier to obtain than those of the optic nerve, making OCT particularly suitable for use with uncooperative children or those with poor fixation. The potential value of OCT in diagnosis of childhood glaucoma has also been demonstrated recently.1

OCT provide objective information of optic disc configuration and/or RNFL thickness and may represent valuable tools in the evaluation of children with subnormal vision and in children with known diseases that may affect the optic nerve, such as craniopharyngioma and glioma. In children with binocular subnormal vision, a normal database is necessary for purposes of comparison. Similarly, in order to assess children with monocular subnormal vision, we need to know the normal range of differences between the two eyes. Normal databases have been established for both HRT and OCT, but these have been determined in adults and may not be applicable to children.2 Hence we did this study to assess the normal RNFL thickness in south Indian pediatric normal.

Prospective observational OCT based study of 200 eyes of 100 children who presented to the ophthalmic outpatient department from November 2017 to August 2019. The study was approved by the Institutional review board. Any child aged 5 years to 18 years but cooperative for OCT with no asymmetry in cup-disc ratio and without optic nerve head abnormalities were included in the study. Children with strabismus or amblyopia, abnormalities of the disc or the retinal nerve fiber layer, Family history of glaucoma, any other hereditary eye disease, history of intraocular surgery or any kind of laser therapy, Mentally challenged children with neurological, metabolic or vascular disorders, systemic disease possibly affecting the eye, Ocular media opacity, Best-corrected visual acuity of less than 20/30, hypermetropia more than +5D and myopia more than –5D or astigmatism ≥ 2D were excluded from the study.

A detailed history including demographics, information on past medical illness and drug intake and their duration was recorded. Ocular diseases if any was noted. The complete Ophthalmological examination was done in all children. Vision was assessed carefully using Snellen's chart. Pupil was also tested for any afferent pupillary defect, which grossly tests optic nerve function and retinal functions. cycloplegic refraction was done in relevant cases. A thorough examination of the eyes was carried out under slit lamp. Fundus evaluation was done using Direct and Indirect ophthalmoscope with special attention to any opacity in the lens, vitreous hemorrhage and retinal detachment.

Spectral-domain OCT was performed with the Cirrus HD-OCT-500. This has an acquisition rate of 27,000 A-scans per second. The protocol used for RNFL assessment was the optic disc cube where a 3.46 mm circular scan is placed around the optic disc and the information about parapapillary RNFL thickness is obtained whereby 27,000 A scans are acquired per second. All images were reviewed and only images with good signal strength with no movement artifact were included for the study. The parapapillary RNFL thickness parameters automatically calculated by the Cirrus software and evaluated in this study included average/full circle thickness — RNFL-FC (360º measure), temporal quadrant thickness, RNFL-T, superior quadrant thickness, RNFL-S, nasal quadrant thickness, RNFL-N, inferior quadrant thickness, RNFL-I. Three such circular scans were performed successively. The average of the 3 scans was used in the analysis. All scans were performed by the same investigator. Mean RNFL thickness in micrometers along the whole circle circumference, four quadrants, 12’o clock hours were obtained.

Both eyes of every subject were selected for statistical analysis. Data were entered in a excel sheet, and then transferred to the statistical package for social science program for data management and analyses. Results were expressed as mean ± SD, range and normal value (95% confidence intervals) calculated according to age, gender and laterality of eyes. Unpaired t-test was used to compare between two groups (male v/s female, right eye v/s left eye). Correlation and regression analysis was done to assess the relationship between RNFL and clinical parameters (age, sex and refractive error). A P-value 0.05 or less was considered for statistical significance. SPSS (version 16) software was used for all the analysis.

Mean global RNFL thickness and thickness of RNFL in each quadrant according to the age groups shows as age increases the mean RNFL thickness as well the thickness in each quadrant decreases (Table 3 and Figure 1). The RNFL (Table 4) thinning was found to be more in the surerior quadrant (RNFL-S). In order to assess the relationship between the age and the RNFL thickness correlation analysis was done. The analysis revealed that there is negative correlation between age and RNFL which shows that there is decrease in RNFL with increasing age (r=0.19). Though this relationship was weak, regression analysis was carried out to know the RNFL reduction for every 1 year increase in age. Analysis revealed that there was reduction of 0.70 micron in RNFL for average increase of one year. Explained variation was found to be (3.6%) R²=0.036(P=0.008).

Relationship between age and RNFL thickness 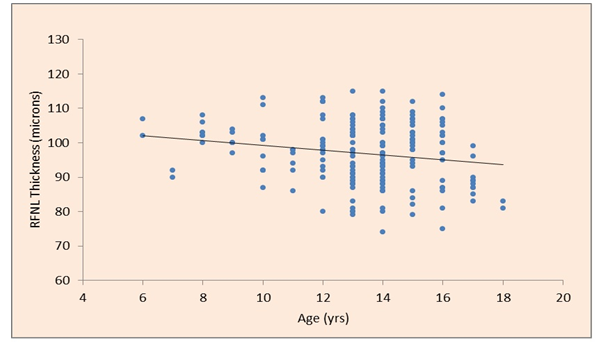 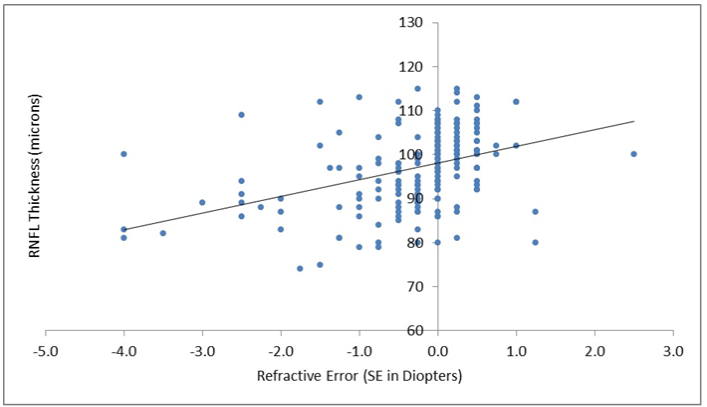 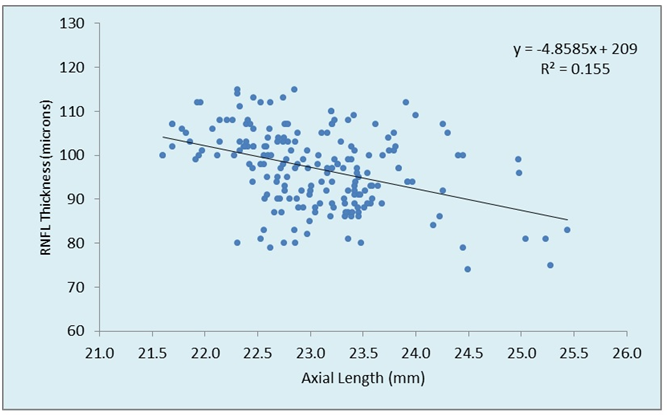 Mean global RNFL thickness and distribution of RNFL in each quadrant

OCT has become widely used tool in clinical and scientific ophthalmology. Its uses in diagnosis of diseases is not restricted only to ophthalmology. Beside its use in identifying macular pathology and glaucoma, in recent year its application to diagnose various ocular conditions has widely been expanded such as multiple sclerosis, optic nerve gliomas, peudotumor cerebri, optic neuritis and papilloedema.3, 4, 5, 6

Normative data are provided automatically by OCT but the data base only include individuals 18 years and above limiting its use in children. The application of OCT in children has been documented in several studies.7, 8, 9, 10 However minimal literature on normative data base exist which would serve as a bench mark for reference and glaucoma scanning.11 The average RNFL thickness in our study was 97.0 ± 8.8µm. When compared to other studies in the past, the average RNFL of our study was lower to those studies done previously. In a large study conducted by Huynh et al., the average RNFL thickness was 103.7 ± 11.4µm.12 The average RNFL in our study was lower to those of salchow et al.,13 Qian et al.,14 EL-dairi et al.,7 Leung et al.,15 and Ahn et al.,16 Borne et al., compared the OCT 2000 with the Stratus OCT and found that the former model consistently yielded a higher RNFL thickness value.17 In comparison the study conducted by Elai et al.,18 Barrio-Barrio et al.,19 Al-Haddad et al.,20 using cirrus OCT yielded results that were consistent with our finding. The RNFL thickness varies significantly among types of OCT used and therefore direct comparison of RNFL thickness measurement among OCT instrument like Stratus and Cirrus may be misleading.11

The distribution of RNFL thickness (thickest inferiorly and superiorly and thinner nasally and temporally) are in agreement with the normal distribution of RNFL. These variations are the result of the large number of nerve fibres converging to the optic nerve head from the superior and inferior arcuate bundles, relative to the number of fibres converging from the papillomacular bundles and nasal retina. Studies vary as to whether the RNFL was thicker temporally or nasally or whether it was thicker superiorly or inferiorly. In our study it was seen that, in the age group between 5-10 years, superior RNFL was thicker compare to the inferior RNFL, with increasing age more thinning was seen in the superior RNFL compare to inferior RNFL, thinning was also seen in temporal RNFL while minimal changes were detected in the nasal RNFL.12

Large number of studies has shown that RNFL thickness decreases as age increases. 21, 22, 23 It has been confirmed by several studies that the number of ganglion cells in human retina decreases with age which results in thinning of the RNFL. This has been confirmed by several investigations using OCT.24, 25 It has been estimated that normal individual lose ganglion cells at a rate of 4909 per year.26 Bundez et al., found that RNFL was thinner in older people with decline of appoximately 2 microns per decade.23 Qian et al.,14 and salchow et al.,13 reported that RNFL thickness tends to increase with age in a population younger than 18 years. B Alamouti  et al., studied 100 individual to establish changes in RNFL thickness with age in their study.25 They found highly significant correlation of both the retinal and the RNFL thickness with age. In these study the retinal thickness decreased by 0.53 μm per year. About 80% of the changes in retinal thickness over time are caused by shrinkage of the RNFL. Poinooswamy et al., examined 150 healthy volunteers of different ages using scanning laser polarimetry.27 They found a progressive reduction of the RNFL thickness with increasing age. The data presented in their study indicate a significant reduction of the RNFL thickness of 0.38 μm/year. In this present study we analyzed that there was mean global decrease in the RNFL, as well as decrease in RNFL in each quadrant with increasing age. The decrease in RNFL was more in superior quadrant compare to inferior quadrant, thinning was also seen in temporal quadrant while it was absent in nasal quadrant. Age was correlated negatively with RNFL thickness. In study conducted by Rajul S Parikh, it was seen that RNFL tends to decrease with age.28 Average RNFL and RNFL by quadrant decreases especially after 50 years of age. Thinning of the RNFL is not uniform in all with maximum loss in the superior quadrant in comparison to inferior quadrant which is more resistant to loss. These findings were consistent in our studies also.

The relationship between RNFL with axial length has been established in many studies. Sony et al., 31 and Bayratkar et al., 32 reported no significant correlation between the RNFL average thickness and axial length, however these studies were limited by small sample size. While Huynhet et al., found significant trend toward thinner RNFL with longer axial length.10 Knight et al., observed that axial length had a negative correlation with the mean RNFL thickness but had a positive correlation with the temporal quadrant in 63 chinese children.21 Cheung et al., reported that longer axial length was associated with thinner RNFL in a population based study of Chinese adults.33 A. Rao et al., in their study reported that the longer the axial length and greater the myopic shift early in life, the thinner will be the RNFL thickness.11 In our study negative or inverse correlation is seen (R²=0.155) with regression coefficient of -4.88 which shows that for every 1 mm increase in axial length, RNFL l decreases by 4.88 microns.

The authors declare that there is no conflict of interest