Purpose: To evaluate the efficacy of intravitreal aflibercept in diabetic macular edema unresponsive to prior intravitreal anti VEGF and steroid therapy.

Materials and Methods: 10 eyes were prospectively investigated. Each eye was treated with intravitreal aflibercept in case of central macular edema unresponsive to prior anti VEGF therapy and intravitreal steroid. Patient were evaluated preoperatively with BCVA, OCT and fundus evaluation and IOP and followed up at 15 days, 6 weeks.

Diabetic macular edema (DME) is the common cause of visual impairment in patients with diabetic mellitus.1 The common microvascular complication of diabetes is retinopathy; micro aneurysm, blood retinal barrier dysfunction, and capillary drop out are important contributors of DME.2 Vascular endothelial growth factor (VEGF) is an important mediator of abnormal vascular permeability in DME.3, 4

Currently anti VEGF (intravitreal aflibercept, ranibizumab, and off label use of bevacizumab) and corticosteroids5, 6, 7, 8, 9 are used for treatment for DME. Aflibercept is a recombinant fusion protein consisting of portion of human VEGFR-1 and VEGFR-2 extracellular domains fused to the Fc portion of human IgG1- iso osmotic solution for intravitreal administration.

Aflibercept has a high affinity for all isoforms of VEGF-A as well as PIGF.10 VEGF is typically present in dimeric form, with receptor binding sites located at each pole of the dimer. The molecular structure of aflibercept was designed for tight binding to both end of multiple VEGF subtypes.11 The results is exponentially greater affinity for VEGF-A. One study showed that the binding affinity of aflibercept was 140 times that of ranibizumab.12 In addition Eylea has the unique property of being able to bind to VEGF-B as well as PIFG.10 Aflibercept have longer half-life compared with ranibizumab.13

In our study we included DME unresponsive to prior anti VEGF therapy and intravitreal steroid for treatment with single injection of intravitreal aflibercept to report the post injection effect. 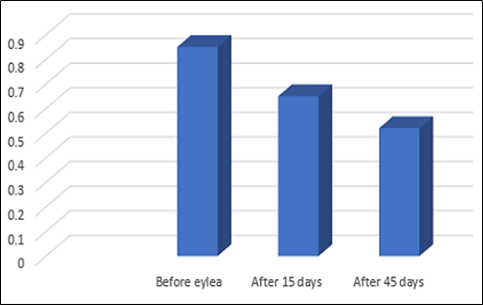 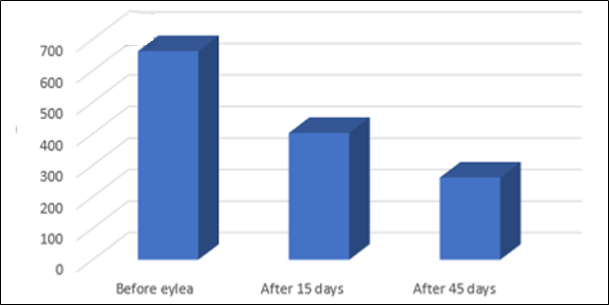 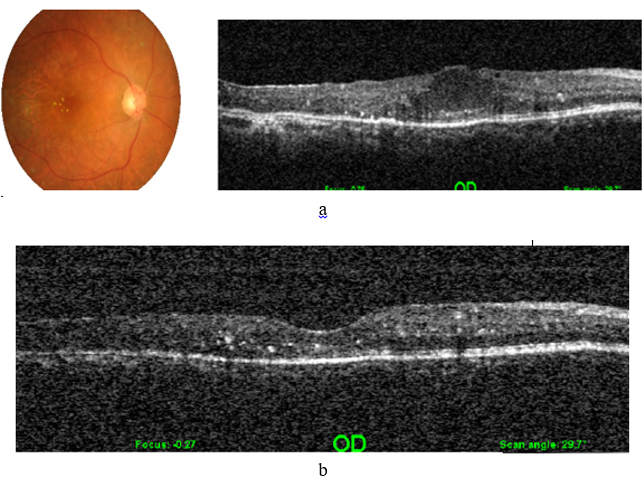 A male 78 years old had non resolving ME in RE in spite of received 6 dose of intravitreal bevacizumab, 1 dose of ozurdex and focal laser over 18 months period. His vision in RE was 6/60 and improved to 6/24 after aflibercept injection. RE fundus shows few hard exudate with macular edema, OCT shows central cystoid macular edema with few hyper reflex dots (Figure 3a). After aflibercept injection RE OCT picture shows cystoid ME with mild disruption of IS/OS junction (Figure 9). 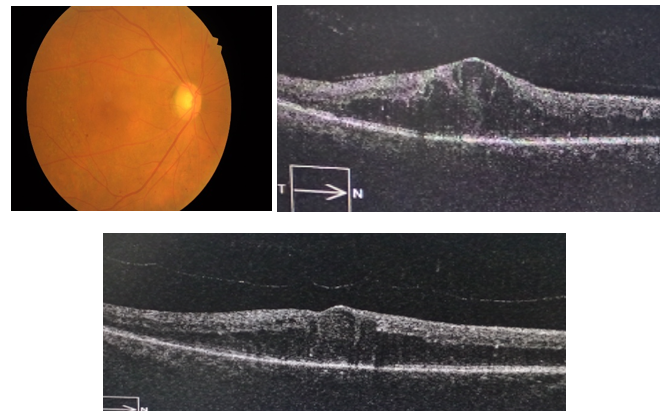 DME is the common cause of visual impairment in patients of retinopathy with diabetic mellitus. VEGF is an important mediator of abnormal vascular permeability in DME.3, 4, 14 Aflibercept is the newer drug and it appears to have theoretical advantage of :(a) had greater affinity to VEGF-A10 (b) it binds to growth factor PGF 1 and VEGF-B10 and (c) the vitreous half-life is 7.3 days.13

Our definition of unresponsive is arbitrary but consistent with other studies; persistent or increasing sub or intraretinal fluid after 3 or more consecutive monthly injections.15, 16

In our study we noticed significant reduction of macular edema with improvement in vision in majority of the patient after switch to intravitreal aflibercept injection. Patient who have long standing disease have more chance to develop receptor resistance to the anti VEGF and steroid drug. The reasons for a response to a newer drug after being refractory or unresponsive to a intravitreal injection may be many. Tachphylaxis may be one. There is also a possibility of certain set of patients being responsive to one drug over the other. Receptors for VEGFs may vary from patient to patient. In our case series we noticed significant reduction of macular edema in 80% of eyes whereas 20% eyes had only mild resolution. Mean BCVA improved from 0.85 log MAR to 0.52 log MAR at 6 weeks. Mean Central macular edema was reduced from 662.5 μm to 261.25μm at 6 weeks. The reason for mild reduction in 20% of patients may be many and needs a larger study looking for the concentration of VEGF levels in the vitreous cavity and invitro studies of response to a particular molecule.

Management of unresponsive DME is challenging for retina specialist. We require treatment armamentarium to manage unresponsive DME apart from improving the systemic health. Aflibercept can be an option we can try for these patients. Aflibercept had a significant anatomical and functional improvement in DME patients in our study.

Timing of switching the therapeutic agents, choosing an ideal molecule and biomarkers to suggest the same is the need from future studies.