An 18-year old Obese female with a history of hypothyroidism & PCOS presented with complains of headache for 5 days associated with nausea and double vision for 2 days. Her neurological examination together with Cranial Nerves was Normal except for bilateral restriction of abduction, suggestive of bilateral abucens nerve involvement. Fundus findings revealed bilateral grade III disc edema. Lumbar puncture indicated increased opening pressure and MRI was normal, which further ruled out the other Causes for Raised Intracranial Pressure. Patient was treated with IV mannitol and then switched over to oral acetazolamide. Patient improved over 1 week. Patient was further followed with serial visual field tests.

Idiopathic Intracranial Hypertension (IIH) is identified by raised intra-cranial pressure (ICP) that by definition does not have any identifiable cause. It predominantly involves obese adult Females of childbearing age, but can involve all age groups. Patients may present with blurring of vision, nausea, headache, double vision, etc. without underlying space occupying lesions of central nervous system. Pseudotumor cerebri and benign intracranial hypertension (BIH) are the terms interchangeably used for IIH, but IIH is the preferred term.

An 18 years old female, obese (weight- 100kgs) with BMI- 32.65kg/m² presented with severe throbbing headache associated with nausea for past 5 days and double vision for past 2 days. Patient is a known case of hypothyroidism for last 7 months- On treatment (tab. Thyroxine 50mcg OD). Also a known case of poly cystic ovarian syndrome for last 6 months- on tab. metformin 1000mg qHS. She had no co-morbidities like systemic hypertension, Diabetes, etc.

On initial evaluation, she was afebrile and hemodynamically stable. On neurological examination, she was fully alert, conscious and oriented, having fluent speech and normal comprehensive abilities. Signs of meningeal irritation were absent. Evaluation of cranial nerves revealed bilateral VI nerve palsy while remainder of cranial nerves were functionally normal.

On ocular examination, visual acuity in both the eyes was 6/9 improving to 6/6 with pin hole, colour vision was unaffected, extra-ocular motiltiy was partially restricted in abduction in both the eyes & anterior aegment was within normal limits. Intraocular pressure (IOP) was found to be 16 and 14 mm Hg respectively in right & left eyes. Fundus examination revealed established disc edema with obscuration of major vessels as they leave the disc in all 4 Quadrants. Modified Frisen’s grade III disc edema.

Opening pressure on lumbar puncture was 250 mm H₂O, which was above the normal limit. CSF study was within normal Limits (protein- 0.25 gm/Lit, CSF glucose- 0.43 gm/Lit, 3 white cells/mm³ and lymphocytes 100%). 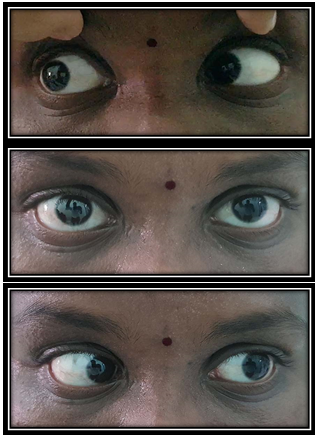 Patient was advised head end elevation to 30˚. Physician & gynaecologist opinions were taken and the treatment for hypothyroidism & PCOD were continued. As per neurologist, Inj. IV Mannitol 200 ml stat & then 100ml IV Q8hourly for 3 days alongside monitoring of input/output. After 3 days, patient was switched from IV medications to Tab. acetazolamide by gradually increasing the dosage.

On discharge, patient was advised weight reduction & the list of drugs which have potential of worsening the condition were to be avoided.

Resolved disc edema on follow up visit at 1 month 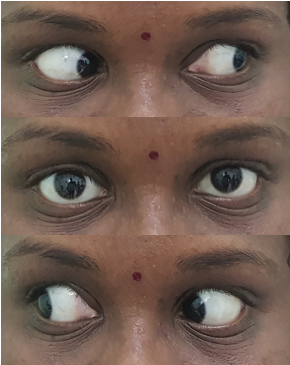 The diagnosis of IIH with bilateral VI nerve palsy was suspected following detection of bilateral disc edema and bilateral restriction of abduction in presence with headache associated with Nausea & diplopia. She fulfilled all the diagnostic criterias of IIH in a patient with papilledema such as elevated intracranial pressure, bilateral 6th nerve palsy, increased lumbar puncture opening pressure, normal CSF studies & normal neuroimaging study which further ruled out the other etiologies of elevated intracranial pressure. Moreover, our patient was an obese woman fulfilling the expected profile for IIH.

Idiopathic intracranial hypertension (IIH) is defined by the modified Dandy criteria which is as follows:

The rise in prevalence of PCOS in women with IIH may highlight PCOS-driven morbid obesity, which further leads to development of IIH. Increased intraabdominal and cardiac filling pressures, in association with obesity, may lead to a retrograde increase in CSF pressure.3

Papilloedema is an important feature of elevated intracranial pressure and its presence is seen in approximately 97% of cases of IIH. In absence of papilledema, 6th nerve palsy would be essential for the definite diagnosis of IIH.6 Interestingly, the patient had bilateral papilloedema and bilateral abducens nerve paralysis both.

In patients with IIH of an adolescent age group, VI Cranial Nerve Palsy was found more often in those with higher BMI & raised CSF Opening Pressure.7

The pathophysiology behind cranial nerve palsies coexisting with IIH is poorly understood. The probable mechanism for the Abducens nerve involvement seems to be due to stretching of the nerve across the apex of petrous bone.8

Regarding the medical treatment, the first-line drug for management of IIH in children & adolesents is Acetazolamide, a carbonic anhydrase inhibitor. But the treatment duration is not standardised; it is therefore adapted based on the clinical symptoms and the progression of visual acuity, with a mean range of 2 to 6 months.2 Unresponsive cases of idiopathic intracranial hypertension can be managed with either optic nerve fenestration, lumboperitoneal shunting or Transverse Dural Sinus stenting. IV mannitol or a lumbar Puncture are usually reserved for Acute Severe exacerbations.

IIH must be strongly suspected in young obese women presenting with headache & transient visual complaints. The diagnosis of IIH remains that of exclusion and neuroimaging studies should be always performed to rule out other structural and obstructive lesions.

Our aim was to report the possibility of idiopathic intracraial hypertension presenting with bilateral CN VI palsy in an adolescent patient with poly cystic ovarian syndrome, obesity & hypothyroidism.

Patients with IIH may have associations like obesity, polycystic ovary syndrome, thyroid disorders, addison's disease, anemia, blood-clotting disorders, kidney disease, lupus, sleep apnea, underactive parathyroid glands and should not be ignored while diagnosing and managing the case of idiopathic intracranial hypertension in children.