Arteriovenous malformations are abnormal tangled blood vessels with multiple irregular connections between arteries and veins. These malformations can occur anywhere with a preponderance to the spinal cord and brain.

AV-malformations are usually congenital and patients might also have an associated intracranial aneurysm. Ophthalmic manifestations of AVM depend upon the location, varying from being asymptomatic to visual phenomena, field defects, diplopia, nystagmus etc.

AV malformations in the cortical or occipital lobe produce visual symptoms which are transient. They can be associated with scotomas and migraine type headache. Signs and symptoms of brainstem AVMs are nonspecific and may include diplopia, nystagmus, dizziness, ocular motor nerve palsy, gaze palsy, anisocoria, or pupillary light–near dissociation. Findings are usually unilateral. There can be transient monocular vision loss due to the “steal phenomenon” in rare cases.

Diagnosis of an AVM are based on angiographic findings which demonstrate an engorged arterial system, rapid filling of the malformation and outflow of the venous system.

This is a case report of a 61yrs old male patient who presented with complaints of diminution of vision in the left eye. The patient was a known diabetic and a smoker. He had a previous history of berry aneurysm for which he underwent clipping. Ocular examination revealed a peculiar tuft of capillaries that was present on the inferotemporal portion of the optic disc. There was associated macular edema. The patient was treated with intra vitreal anti-VEGFs for the macular edema. This was followed by periods of resolution and recurrence. The following is the course of the patient in the hospital with repeated recurrences of macular edema following treatment with anti-VEGF injection.

Fundus photo of the left eye of the patient demonstrating a normal sized disc, normal colour with a normal cup/disc ratio with a tuft of capillaries along the inferotemporal border of the disc 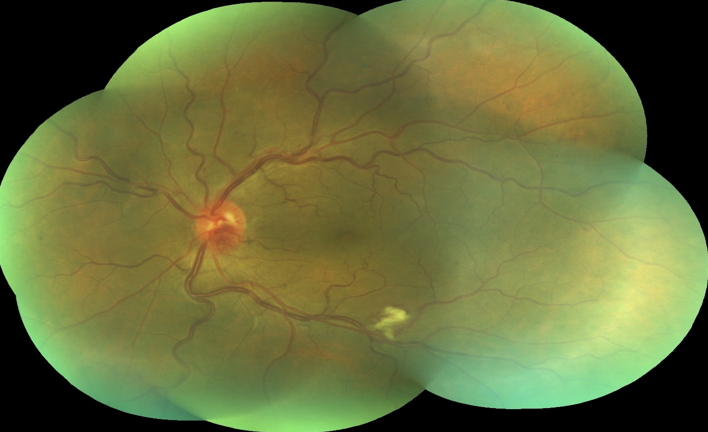 The fundus photo of the left eye showed essels over disc appear which appeared tortuous and dilated, with a A:V ratio 2:4. Cotton wool spots are seen in the inferotemporal arcade. Macula had a dull foveal reflex.

Course in the hospital

Over the next 12 months the patient underwent 4 more courses of intravitreal ranibizumab and 1 intravitreal dexamethasone. The patient’s blood pressure was monitored routinely and also recorded before every procedure and was found to be normal. The highest reading recorded was 140/90mmHg. The patient eventually underwent phacoemulsification+intraocular lens in the LE for cataract. 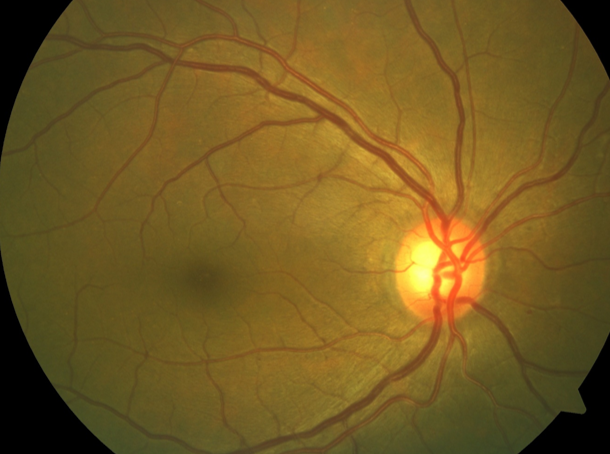 Course in the hospital

Over the next 12 months the patient underwent 4 more courses of intravitreal ranibizumab and 1 intravitreal dexamethasone.

The patient also underwent phacoemulsification+intraocular lens in the LE for cataract. 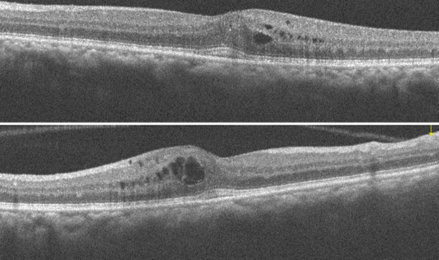 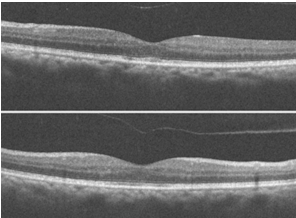 Other Ocular Signs and Symptoms Include

MRI and MRV had no abnormality, ruling out the possibility of an associated intracranial vascular malformation. Fundus fluorescein angiography was requested. The patient refused for the same. Glaucoma work up was done for the patient. OCT demonstrated normal RNFL thickness and Ganglion cell count, making glaucoma an unlikely pathology. Neovascularization of the disc due to diabetic retinopathy is unlikely as the fundus of the other eye had no retinopathy changes. Wyburn mason syndrome is unlikely as the patient has no other systemic abnormalities. Patients of this syndrome are also likely to be diagnosed of the same during their infancy or childhood.2 No history of skin lesions, neurological manifestations or any other characteristic ocular abnormalities such as proptosis, blepharoptosis or cranial nerve palsies. This patient has to be treated symptomatically. Owing to the wide range of presentations in AV malformations, there is no particular treatment protocol and each patient’s treatment must be individually tailored according to their symptoms. This patient must be monitored regularly with serial OCT images to make sure the normal foveal contour is maintained and any recurrences with macular edema should be treated appropriately with anti-VEGF injections or intravitreal steroids. The patient maintained good vision with this protocol and having already treated the patient’s cataract in the left eye, this would be the best course of treatment.

Taking into account the history of Berry anuerysm AV malformation of the optic disc seems to be likely diagnosis.