Iridocorneal endothelial (ICE) syndrome is a group of overlapping clinical spectrum which can manifest as any of the 3 subgroups with variable amount of corneal edema, abnormalities of iris and secondary angle closure glaucoma without pupillary block. ICE syndrome is typically unilateral, non hereditary, most commonly involving middle-aged females of 20-45 years. Out of the 3 variants, most common being Chandler’s syndrome involving over more than half the cases, followed by essential or progressive iris atrophy (25%) and Iris Nevus or Cogan Reese syndrome (25%). The pathology in all three entities is growth of an abnormal endothelial cell layer which proliferates and migrates across the angle of anterior chamber and over iris surface and thus progressing to glaucoma. Other ocular structures are uninvolved and no systemic disease association been found. Rarely it may have familial involvement. Nearly 40% cases may present with secondary glaucoma. Here I am reporting a case of ICE syndrome with essential progressive iris atrophy associated with secondary glaucoma.

A 40 year old female presented to the ophthalmology department with a chief complaint of unusual looking left eye for many years. She had no complaints of diplopia or photophobia with no history of trauma in that eye. No history of defective vision, pain, redness, watering. She was healthy looking with no comorbidities. Her general examination and vitals were within normal limits. 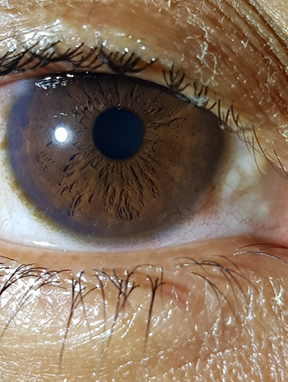 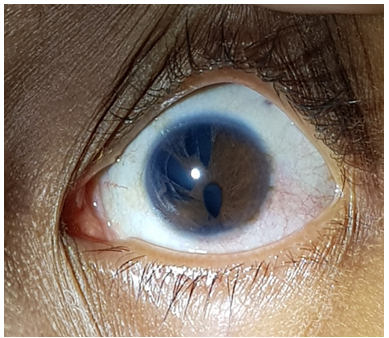 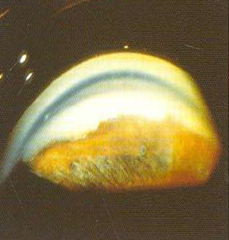 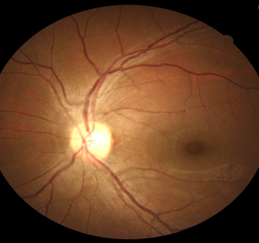 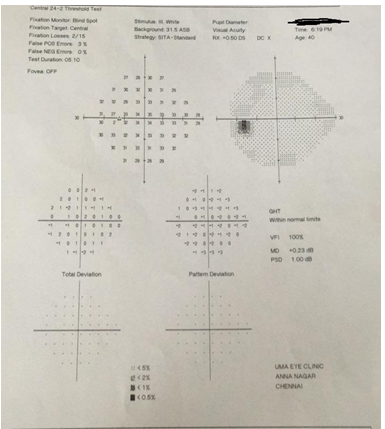 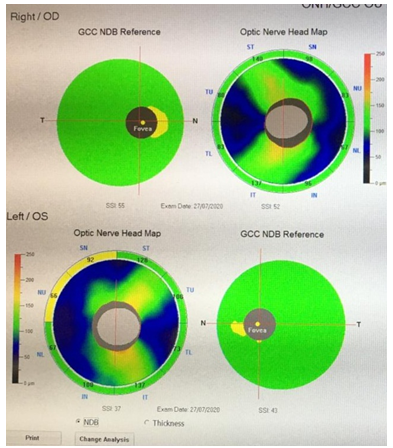 Patient was started on eye drop Timolol 0.5%, 1 drop BD in left eye. On follow up the IOP was measured and under control (18 mm Hg) and she is being followed up in our OPD for her glaucoma status every 3 months. Her fundus LE CDR 0.5, Visual fields – Normal and no progression of glaucoma.

ICE syndrome involves an abnormal clone of corneal endothelial cells that develop with epithelium like characteristics of desmosomes, microvilli, etc. and can proliferate. These abnormal endothelial cells are dysfunctional, leading to corneal edema. Further more, the corneal endothelium proliferates and migrates like a membrane covering the angle of anterior chamber and anterior surface of iris. This membrane contracts resulting in peripheral anterior synechiae, corectopia, iris atrophy, iris stretch holes, iris nodules & glaucoma. Ischemia may be a secondary phenomenon causing Iris melt holes. The trigger for the epithelialization of these endothelial cells is unknown.2 Though some postulate abnormal neural crest cell proliferation. Histopathological examination of the eyes with ICE syndrome shows thin abnormal corneal endothelium and Descemet’s membrane separated by a thick accumulation of collagen.3

Specular microscopic examination of this group of disorders shows characteristic ICE cells. The cells lose their normal hexagonal appearance of endothelial cells and appear rounded with raised intracellular granularity and a dark spot. The corneal endothelial changes are marked and earliest in Progressive Iris Atrophy entity of ICE syndrome with minimal anterior synechiae.4 The clinically non-involved, contralateral eye of these patients also show such abnormal endothelial cells in few cases.

The corneal endothelial changes are most prominent & present with blurring of vision and silver hammered or beaten bronze appearance of cornea due to corneal edema. It can rarely be bilateral. Slit lamp Biomicroscopy can identify the junction between normal and abnormal endothelium on careful examination using specular reflection.5

This clinical entity has marked Iris changes characterized by corectopia and progressive dissolution of the iris. The iris dissolution starts as a patchy atrophy of corneal stroma leading to full thickness holes. Iris holes are located away from the direction of pupillary displacement, caused due to traction and known as stretch holes.6 Melt holes occur without corectopia and stretching are thought to be ischemic in nature. Peripheral anterior synechiae (PAS) are mostly broad based & located anterior to Schwalbe's line resulting in corectopia towards the PAS. These PAS, lift the iris off the surface of the lens and produce ectropion uveae. As PAS becomes more extensive, leading to secondary angle closure and rise in IOP.3

This can be distinguished by the presence of pigmented iris lesions or pedunculated nodules on anterior surface of Iris. There are patches of normal iris pinched by the contracting endothelial membrane.7 Other features include heterochromia and ectropion uvea. Iris atrophy is absent in half the cases and in the remaining half it is usually mild-moderate, although corectopia may be severe.

Symptoms and signs of ICE syndrome

Corneal edema may respond to topical hyperosmotic solution or ointment or soft contact lens. In many cases if IOP improves, corneal edema reduces Penetrating keratoplasty is indicated if vision is reduced significantly or causes pain from bullous keratopathy or secondary infectious keratitis.2

Medical management has generally found to be inefficient over long-term. If the entire angle is covered by the membrane or sealed by synechiae, clinician must rely on β adrenergic antagonists, α adrenergic agonists and carbonic anhydrase inhibitors. As a general rule medical treatment fails because the condition is progressive.4 Filtering surgery is often required though it fails after 2 to 5 years, perhaps related to proliferation of a membrane over the internal opening of the scelerostomy even when adjunctive use of antimetabolite therapy. In such cases, repeat trabeculectomy with MMC application or other shunt operations can be attempted.2 Immunotoxin has been shown to inhibit proliferation of endothelium in tissue culture. Perhaps antiviral therapy may play some role if the presence of viral particles can be confirmed and positively identified.