Koshy, Lukose, and Thomas: Proportion of various ophthalmic ailments and causes among the participants on their first visit to a tertiary care ophthalmic OPD- A cross sectional survey from south central Kerala

Background: Blindness, loss of eyesight, could be temporary or permanent. Damage to any portion of the eye, optic nerve or the brain that is responsible for this function results in visual impairment. The commonest causes for blindness are cataract, refractive errors, glaucoma, corneal opacities.

Discussion: Refractive error and cataract were most frequent. Color blindness was less common. Cataract and glaucoma was not observed before 40 years of age.

Blindness, loss of eyesight, could be temporary or permanent. Damage to any portion of the eye, optic nerve or the brain that is responsible for this function results in visual impairment. The quality or productivity of the life of a person can thus be crippled. According to the WHO criteria, blindness is defined as a visual acuity of less than 3/60 in the better eye. The commonest causes for blindness worldwide are cataract, refractive errors, glaucoma, corneal opacities, age related macular degeneration, childhood blindness, diabetes, trauma and other retinal disorders.1, 2, 3, 4, 5, 6, 7 Most of these conditions are treatable.

It is estimated that, globally 2.2 billion people live with some level visual impairment.2 In India, the estimated blindness is 4.8 million in 2019. Prevalence of visual loss from various causes in India were similar to Global causes for impaired vision.1, 2, 5, 8, 9 Extensive studies have reported significant disparities in prevalence and causes for visual impairment and blindness in various states of India.10 Evaluation of colour perception is often included in the routine ophthalmic examination. Reported percentage of colour perception varies. In Europe, Nepal, Ethiopia and in North India, they were found to be 8.4%, 3.9%, 4.2% and 8.35% respectively.11, 12, 13, 14

There is a paucity in reported studies on incidence and prevalence of various levels of blindness and causative factors in Kerala, which holds a unique demography. Present study has been conducted to estimate the incidence of visual impairment and the factors associated.

Present cross-sectional study has been conducted at Believers Church Medical College hospital, a tertiary care hospital, from south central part of Kerala. Ethical permission was obtained from the institutional ethical committee. Consented subjects from the ophthalmology out-patient department, attending either for their ophthalmic ailments or for certifying their visual status for their official requirements for the first time were enrolled. The proportion of ocular diseases, degree of blindness and causative factors were assessed and recorded.

The ophthalmic examination was done by four optometrists and three ophthalmologists. Demographic data and presenting complaints were recorded by the optometrists. Visual acuity was tested with an illuminated Snellen chart. Auto refraction was performed with (Topcon KR-800) and subjective correction was performed on subjects on whom visual impairment was detected, to obtain best corrected visual acuity. Individuals who could not read the largest letter on the chart were tested for counting fingers, hand movements and light perception. Both the eyes were tested separately. Before the evaluation by an ophthalmologist, colour vision evaluation using Ishiara pseudo-isochromatic plates and IOP measurement, employing a non-contact tonometer (Topcon RL T6) were performed.

After these preliminaries, a comprehensive ocular examination was done that includes distant direct ophthalmoscopy, slit lamp examination, applanation tonometry, gonioscopy - for all who had a history of trauma, suspected narrow angles and elevated intraocular pressure- and a post-dilatation examination for assessing the lens and retina. Ocular Pupil dilatation was done with 5% Phenylephrine and 0.8% Tropicamide. Eyes with narrow angles were dilated only after performing a YAG iridotomy.

Data collected on basic demography (age and gender), level of blindness, causative factors and examination findings were recorded in structured proforma developed for recording the data observed. Presence or absence of commonest ocular ailments (Refractive error, cataract, corneal opacity, glaucoma, diabetic retinopathy, other macular pathologies, Trauma and PCO) responsible for the impairment of the vision were considered and recorded. In addition, primary and secondary diagnoses (if any) of the participants were documented for each eye.

The proforma was filled in and completed by the ophthalmologist. Data were entered into MS excel and analyzed using statistical software (SPSS- 21). Descriptive statistics were obtained and bivariate differences calculated using chi-square test.

Participant’s diagnosis according to age group

Level of visual impairment of the participants based on WHO classification 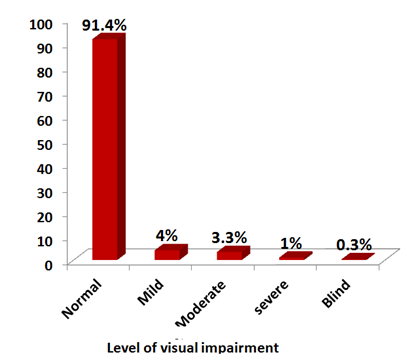 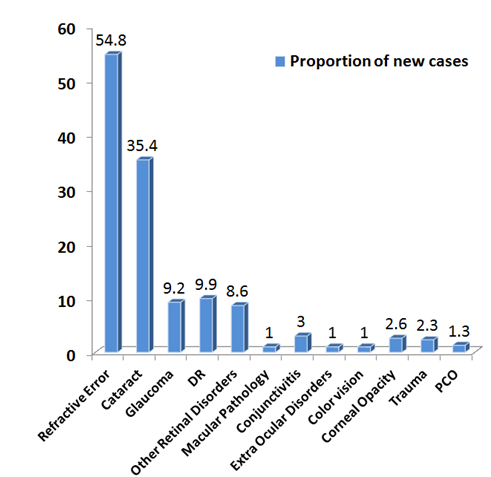 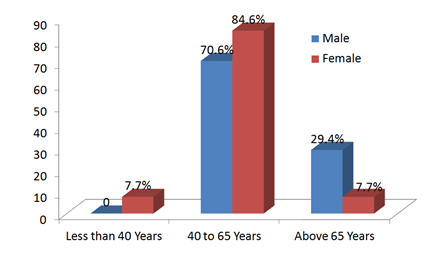 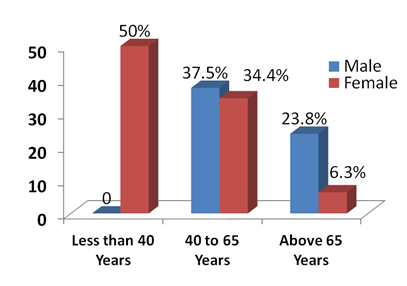 Visual deterioration is a major factor that hinders quality of life occurring across the population irrespective of their age, gender and socio-economic status. WHO estimates that globally, 2.2 billion people are visually impaired of which 1 billion could have been prevented. Although studies on the causes of blindness are amply available, data on the prevalence and causes is sparse in the region where this survey was performed.

This study was the first of its kind to have conducted in the south central region of Kerala where the literacy rate is almost 100% and per capita income 60% higher than India’s average. Among the participants, 91.4% were normal and visual impairment was noticed in 8.3% of them. On comparing these data from neighboring regions, this was higher than a similar study conducted in Sri Lanka (5.9%)9 and less than an urban study conducted among Indians in Singapore.15 An Iranian eye study, the YAZID eye study showed a visual impairment of 4.4%16 while only 0.3% visual impairment prevailed in an eye study among Latinos in Los Angles.17 Blindness was found to be of a very low percentage in this analysis that reported as only 0.3%. This was comparable to the prevalence of blindness of 0.4% in a study among Indians in Singapore15 and among Latinos in U.S.17 An extensive study conducted in South India,6 prevalence of blindness was found to be 1.84%. Neighboring Tibet,18 Pakistan8 and Sri Lanka9 had a prevalence of 2.3%, 2.7% and 1.1% respectively.

However, similar studies conducted in the western countries did not show refractive error as the dominant cause, but ARMD, retinal disorders and Glaucoma as the leading causes in them. Subjects were in the older age group, an expected number of cataract for this age group, unlike in most of the studies in the Asian continent, were not the primary cause for visual impairment.2, 20

We observed that among males, 70.6% and among females 84.5% of the diabetic retinopathy belonged to the ‘40-65 age group’. An extensive population based study done in North India recently, attributes only 1.4% of blindness and 0.2% of moderate visual impairment to diabetic retinopathy.7

The proportion of eye disorders observed in this study was proportional to the leading causes for impaired vision which was comparable to global data available22, 2 Macular pathology was present in 3 cases only (1%) that included ARMD also which was less compared to the western population.2

None of the participants had cataract or glaucoma below 40 years of age. As expected, the percentage of cataract advanced as age progressed and glaucoma showed only a marginal advancement in the number of cases. Trauma was not present in the ‘above 65’ age group and equally distributed across gender. Corneal opacities were distributed evenly in all categories of age. Only 1% of the subjects had impaired colour vision, which was very low against similar studies.11, 12, 14

We conclude that, visual impairment across regions are similar, refractive error and cataract were found to be the leading causes of visual impairments. Colour blindness was less prevalent in our community. Even though diabetic retinopathy was equally distributed to any other study, diabetes was more prevalent in our community. Despite the high literacy rate and an excellent health care system of the state, avoidable blindness still exists that is comparable to areas with low literacy and socioeconomic status. Extensive, systematic, and organized assessments are essential for addressing the prevalence of morbidity.

Data collection through a community based study would have been more informative.

Diabetes research and clinical practice No.13, 2019

WHO world report on vision