Materials and Methods: A descriptive cross sectional study was carried out in 52 eyes of 46 patients in the department of ophthalmology, Silchar Medical College, Silchar for a period of one year. May, 2019 with due consideration of definitive aims and objectives.

Results: The commonest (60.87%) age group affected in RVO was 50-69 years. Majority of patients belonged to middle socioeconomic status. Systemic hypertension was the most frequently (52.17%) associated systemic condition to be found as predisposing factors for developing retinal vein occlusion. Other significant risk factors found in this study were diabetes mellitus, hypercholesterolemia, and hypertriglyceridemia and hypermetropia was found to be another risk factor for the development of RVO.

Conclusion: Though RVOs occur with different facets of demography and predisposing factors, most of these are not in direct association with RVOs.

CRVO can be divided further into ischemic and non-ischemic type. This distinction among types of CRVO is important because up to two-thirds of patients who have the ischemic variety develop iris neovascularization and neovascular glaucoma.

Days are not far when the major cause of blindness in adults will be shifted from the anterior to posterior segment of the eye and studies have shown increased incidence of blindness during the last decade or two due to various retinal ailments and are showing an uphill trend hence serves as a stimulus for the research and development in the field of retinal diseases.

The current study was carried out in the department of ophthalmology, Silchar Medical College, Silchar for a period of one year from June, 2018 to May, 2019. All the cases in which retinal vein occlusion was observed for the first time in the OPD during the study period were included in the study excluding the old diagnosed cases. A total of 46 cases were found & examined meticulously.

Each one of the selected cases of retinal vein occlusion after a preliminary screening was subjected to complete sequential evaluation for the aetio-pathological and clinical study with full cooperation of the respective patient and the attendant as the nature of the study was properly explained to them prior to the procedures. The cases which were selected on the basis of a positive clinical history and fundoscopy by direct and indirect ophthalmoscopy were confirmed by the optical coherence tomography and fluorescein angiography.

All selected were questioned thoroughly to know the presence or absence of cardio-pulmonary abnormalities, thromboembolic phenomenon and diabetes mellitus any ischemic episodes, chronic infection, hypertension etc. and the findings were noted accordingly· Due importance was given to the history of Glaucoma with reference to its duration and medication.

Our study included 46 cases (52 eyes) of retinal vein occlusion attending the outpatient department of Silchar Medical College & Hospital, from June, 2018 to May, 2019.

In CRVO group, increased IOP was found in 3 cases (15%) and 4 cases (7.6%) were found to have relative afferent pupillary defect.

Distribution of sex in patients suffering from roves

Distribution of socioeconomic status in patients suffering from roves

Distribution of systemic diseases in RVO 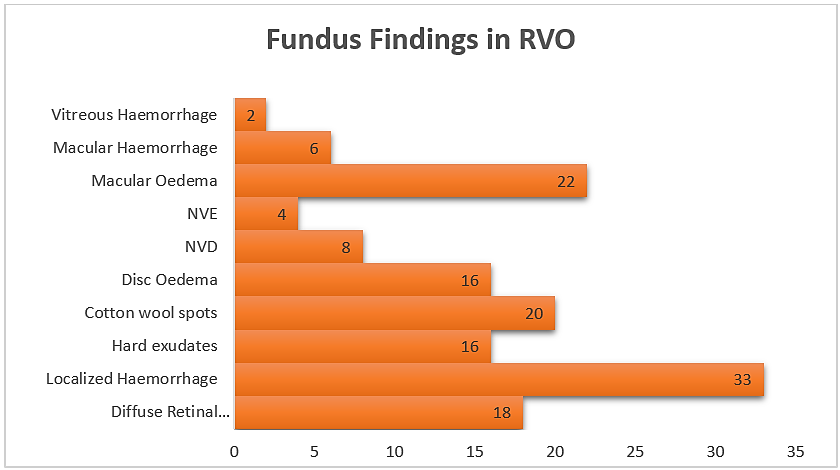 Distribution of systemic diseases in RVO

The association of systemic diseases with the cases of RVO was found to be statistically non-significant (p > 0.05).

The association of Refractive status and intraocular pressure with retinal vein occlusion was found to be statistically insignificant (p> 0.05).

There was no statistical significant association between lab findings and RVO (p>0.05).

Retinal vein occlusion is a relatively most common retinal vascular disorder second to diabetic retinopathy.3 Since the time of Leibrich in1854, Leber in 1977 and Michel in 1878, the exact aetiology and pathophysiology of the disease is yet to be fully established, making the disease progression unpredictable.

Mc Grath et al.6 in their study evaluated the systemic factors contributory to retinal vein occlusion found that 61% of their patients with retinal vein occlusion were suffering from hypertension. In our present study, we observed that 52.17% cases of RVO (24 out of 46 cases) were suffering from hypertension. In CRVO patient group, 47% cases were hypertensive and in BRVO, it was 55%. Thus, incidence of hypertension in our study was higher in patients with BRVO than CRVO.

Quinlan et al.7 found 18% of central vein occlusion were associated with diabetes in elderly patients, whereas only 8% cases of younger age group, below 50 years having diabetes. In our study, 13 patients (28.2%) with RVO were diabetic. 29% were in CRVO group & 27% were in BRVO group. Thus, our study corroborates with the studies of the above authors.

Clarkson8 described association of CRVO with cardiovascular diseases. Appiah and Trempe9 also reported in their study that heart disease was contributory to CRVO and BRVO in 22.2% and 23.4% cases respectively. In our study, we had found 10.86% patients were suffering from CVS disorders. 17% of the total CRVO patients were found to have a CVS disorder & in cases of BRVO, it was 7%.

Dodson et al.10 in their study found a significantly increased prevalence of hyperlipidemia (28.8%) and hypercholesterolemia (23.7%) in the group of branch retinal vein occlusion and of hyperlipidemia (32.2%) and hypercholesterolemia (22.5%) in the group with central vein occlusions compared to the controls. In our study, we have found increased levels of triglyceride in 29.41% of CRVO patients & 34.48% of BRVO patients. Total cholesterol was found to be elevated in 23.52% of CRVO cases and in BRVO cases it was 41.37%. Therefore, in our study there is increased prevalence of hypertriglyceridemia & hypercholesterolemia in BRVO patients in comparison with the CRVO patients, which corroborates partially with the studies of Dodson et al.

Appiah/ & Trempe11 in their study reported an association between raised ESR and retinal venous occlusion. This rise of ESR was more prevalent in CRVO than BRVO. However, in our study, we had found elevated ESR in 41.17% & 13.7% of cases of CRVO & BRVO respectively. The reason for high prevalence of elevated ESR in our study may be multifactorial.

Vannas and Tarkkanen10 reported 42% incidence of simple glaucoma in a series of 71 patients with CRVO and only 10% of BRVO cases associated with simple glaucoma. However, in our study, we had found only 15% of CRVO patients with elevated IOP and in case of BRVO, it was 15.62%. No case of angle closure was detected.

Appiah and Trempe12 in their studies found that on comparing CRVO with BRVO, hyperopia was found in 38.5% and 52.8% cases respectively. Gutman13 reported a high incidence of hypermetropia in young patients with CRVO. In our study, 25% & 46.87% patients with CRVO & BRVO cases respectively, were hyperopic. Thus, our study findings were in accordance with that of Appiah and Trempe.12

Sudden onset deterioration of vision is the predominant presentation in RVO. It occurs in all age groups though the middle and older age groups are commonly affected. Socio- demographic distribution of both CRVO & BRVO were statistically insignificant i.e, they have no association. systemic hypertension, diabetes mellitus, Hypercholesterolemia, Hypertriglyceridemia and Hypermetropia are common predisposing factors for developing retinal vein occlusion.

D Elder Disease of the Retina in Systems of Ophthalmology, Vol. X19671023