Materials and Methods: Retrospective analysis of records was done for patients who were operated for childhood cataract from June 2018 to April 2020.

Results: Total 244 eyes of 178 patients’ included.100 were male & 78 female, mean ages at the time of surgery was 8.64 years (SD2.63 years). Of these 178 patients 102 (57.30%) had unilateral and 76 (42.69%) had bilateral cataract. Most of congenital and traumatic cataract belonged to 7 years to 12 years age group & developmental, complicated & others in age group of 13 years to 18 years. Visual axis opacification were noted in 14 patients due to posterior capsular opacification, corneal opacity and pigment deposition over IOL.

Conclusion: Treatment of childhood cataract has evolved but delivering the facilities to patients has been a biggest challenge to health care providers. This can be improved by delivering accurate & frequent counseling to society including prevention, identification, intervention and rehabilitation and collaborating with government programs like RBSK and AYUSHMAN Bharat.

Opacification of crystalline lens is referred as cataract, which can be congenital, infantile, juvenile, pre-senile and senile. Childhood cataract is one of the leading causes of treatable blindness. It accounts for 7.4%–15.3% of paediatric blindness and significant avertable disability adjusted life years.1, 2 One of the priority diseases within the disease-control strategy of VISION 2020 initiative is childhood blindness.3 Incidence of childhood cataract ranges from 1.8 to 3.6 /10,000 per year with a median prevalence of about 1.03/10,000 children(0.32-22.9/10,000). Low income economies have a higher prevalence (0.63-13.6/10,000) of childhood cataract as compared to high income economies (0.42-2.05/10,000), laterality and gender based prevalence has no difference.4 The diagnosis of cataract is incidentally made on routine screening in 41% of cases whereas leukocoria and strabismus led to diagnosis in 24% and 19%, respectively.5 Childhood blindness can be reduced and quality of life can be changed by operating on these cases as early as possible.

Choithram Netralaya and Research Center provide community eye care services to West Central population of India. Free eye care services and eye screening camps have contributedto improve pediatric eye care by early detection, counseling and early surgery of childhood cataract. All the surgeries performed are free of cost, under Rashtriya Baal Swasthya Karyakram(RBSK) scheme which started in our institute in 2018. We studied childhood cataract and visual outcome following surgery as an objective of our study to provide evidence based information regarding pediatric cataract in West Central India.

Retrospective analysis of records was done, of patients of age 5months to 17 years who were operated for childhood cataract at Choithram Netralaya and Research Center from June 2018 to April 2020. Screening of more than 13000 patients was done by trained community optometrist at outreach camps and patients with significant cataract were referred to institute for further evaluation and cataract surgery.

Analysis of medical records was done, data was collected and recorded in Microsoft Excel Sheet (Version 6.0, Microsoft USA). Recorded data included demographic data, parental information including, medical history, marriage history regarding consanguinity, birth history including birth weight, prematurity, vaccination history, parental medical history and patients past history was recorded. Visual acuity was recorded with the help of Snellen’s Chart and Tellers Acuity cards. Detailed anterior segment evaluation was done by our experienced Pediatric surgeon under full pupillary dilatation, anterior chamber details, corneal diameter, type of cataract whether congenital, developmental, traumatic or complicated, IOP was recorded with the help of Perkins Hand held Applanation Tonometer. For those patients in whom examination was not possible examination was done under short general anesthesia. Keratomerty, axial length and IOL power was calculated with the help of IOL Master (Zeiss, Germany). Posterior segment evaluation was done using indirect ophthalmoscopy and if media opacity obstructing the view then B-scan was done. Routine blood and urine analysis was done including complete blood count, random blood sugar analysis, routine urine analysis, HIV, HBsAg following which pre anesthetic check up was done and fitness was taken for each and every case. 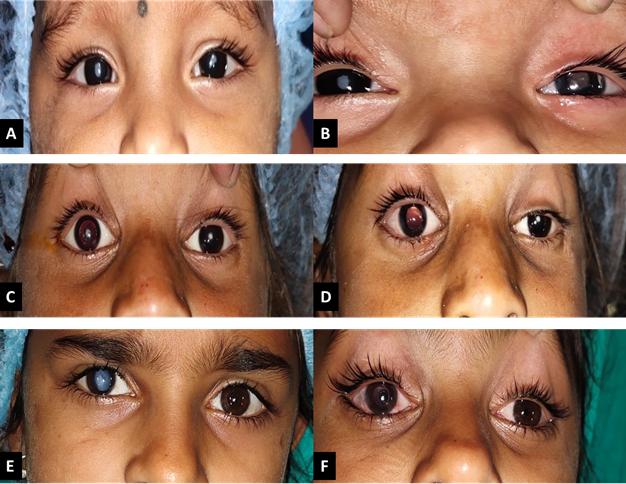 Of these 178 patients 102 (57.30%) patients had unilateral and 76 (42.69%) patients had bilateral cataract, unilateral and bilateral frequency was calculated in different sub groups of different types of cataract. On the basis of history obtained for age of onset, trauma, systemic and ocular disease childhood cataract were divided into Congenital (52.80%), Developmental (37.07%), Traumatic (6.74%), Complicated (1.12%) and others (Membranous and Absorbed cataract of unknown etiology) (2.24%) (Table 2). Frequency and proportions of different cataract were analyzed in different age groups at the time of operation, maximum number of congenital and traumatic cataract patients 40.04% and 100% respectively belonged to age group of 7 years to 12 years, whereas developmental (48.48%), complicated(100%) and others (100%) were found to be in age group of 13 years to 18 years (Table 3).

During the detailed pre-operative evaluation we found that of 96 patients with congenital cataract 46 (48.93%) patients had nystagmus, 6 (6.25%) had microcornea, 2 (2.08%) had Marfan’s syndrome with subluxated lens, 2 (2.08%) had iris coloboma, 2 (2.08%) had aphakia in other eye and 2 (2.08%) had corneal opacity. Of 12 traumatic cataract patients 10 (83.33%) had corneal opacity. Of total 178 patients 14 (7.86%) had squint. None of the patient had persistent fetal vasculature (PFV), any pre existing posterior capsular deficiency, congenital glaucoma or any systemic or metabolic disease. None of the parents had consanguineous marriage.

Of the 244 eyes operated only 2 cases had intra-operative complication of loss of capsular bag during the surgery, following which Iris claw lens was placed in one and in other patient PCIOL was placed in sulcus along with peripheral iridectomy. One case had IOL drop in early post – operative period for which vitrectomy, IOL removal and SFIOL placement was done by Vitreo-Retinal surgeon. In 10 patients reactionary membrane formation in early post-operative period was seen which was managed by oral and topical steroids along with cycloplegics, which resolved at 1 month follow up. In 4 patients severe inflammation was present post-operatively along with reactionary hypopyon which was managed by oral and topical steroids. None of the case had infective endophthalmitis. One patient had corneal abrasion at one week follow up which was taken care with patching but it developed nebulo– macular corneal opacity afterwards.

Visual axis opacification were noted in 14 patients 6 moths post-operatively which were due to deposition of pigments and fibrin over IOL in 6 cases, posterior capsular opacification in 2 cases and corneal opacity obscuring vision in 4 cases. 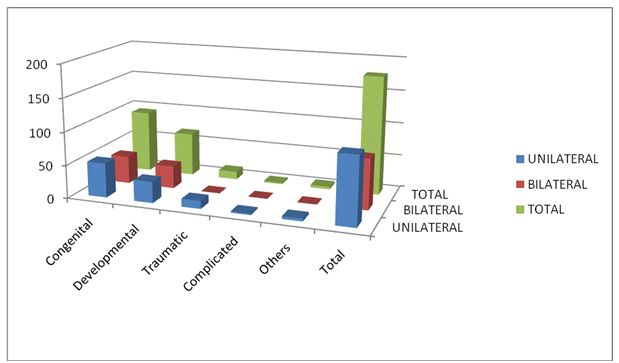 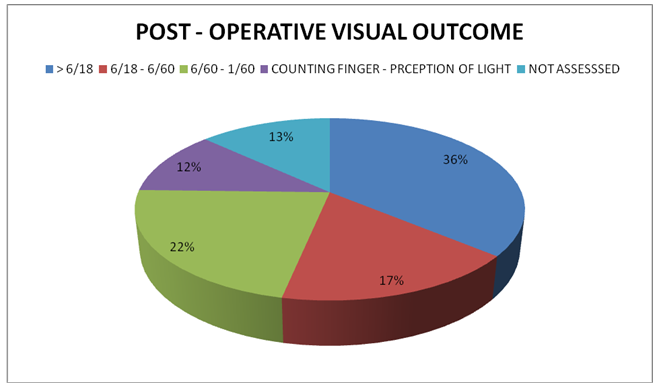 One of the major treatable causes of childhood blindness is cataract. It is one of the major cause of loss of vision in pediatric age group worldwide and in developing countries, counting for 17-39% of cases as said by Moriarty et al.(1988)7 and Eckstein et al.(1995),18 however after Vision 2020 global initiative the problem has decreased quite a bit. As stated by Lloyd et al. (2007)6 this is a rare disorder, in contrast to our study where the rate of childhood cataract was pretty high, this might be due to low socioeconomic status of our study population, lack of health care facilities around them, and mainly the education status and awareness of parents, this is supported by the fact that all the patients in our study were screened in rural out-reach camp setup and then referred to our institute for further management. Improvement in management of childhood cataract is improving day by day due to continuous outreach and ongoing clinical research.

Overall male: female ratio in our study was 1.28 which relates nearly well with Abrahamsson et al. 1999 and Haargaard et al. 200419, 20 on childhood cataract including both operated and non-operated cases. This could be due to low literacy rates of the parents, a relatively less access for females to eye care services, lower socioeconomic status and higher incidence of trauma in males.

Out of 94 congenital cataracts 12 had associated anomalies such as microcornea, Marfan’s Syndrome, iris coloboma and corneal opacity. None of the cataract was associated with maternal rubella syndrome, which is less as compared to Johar et al.12 and previous studies in north India and south India.7, 26 This decrease may be attributed to the fact that good antenatal care and counselling is provided and aggressive vaccination in children is done these days. In rest of the cases aetiology could not be assessed in congenital cataracts.

In our study post-operative visual acuity was more than 0.5 logMAR in around 36% cases which was less as compared to Raina et al. 16 which reported >0.5 visual acuity in 42 eyes. In Kim D Het al.2012, 27 thirty-seven paediatric bilateral pseudophakic patients were identified with a mean follow-up period of 81.4 months and best corrected visual acuity of20⁄40 or better were attained in 44.0% of eyes, and the median BCVA was20 ⁄ 50. Low visual outcome in our study can be attributed to late presentation of patients for surgery; maximum patients were presented between 7 yrs – 12 yrs among which maximum patients were having congenital cataract leading to development of amblyopia.

Most of the children needed visual rehabilitation services post cataract surgery 26 such as proper amblyopia management, low vision aids etc. Due to low rate of follow up, lost follow ups, uncooperative nature of children proper visual assessment could not be done in many patients. This can be improved by having a children friendly atmosphere in the paediatric ophthalmology departments and having trained optometrist who can properly and patiently assess the visual acuity of children by use of toys, coloured blocks acuity cards and proper counselling of parents regarding importance of follow ups.

Long term follow ups should be encouraged in parents’ by proper counseling of parents pre and post surgery on community basis in society providing them good knowledge about the severity disease and outcome after surgery. This will in turn help in assessing proper visual outcome in these patients and lead to a better visual rehabilitation.

Treatment of childhood cataract has evolved during the past decade but delivering the facilities to patients has been a biggest challenge to health care providers. This can be improved by delivering proper and frequent counselling to society including prevention, identification, intervention and rehabilitation. Further studies are required to identify factors leading to childhood cataract. Finally eye care providers should collaborate with different eye care programme run by government such as RBSK and AYUSHMAN Bharat in improving child health especially in rural areas where socioeconomic condition of patients overpowers the graveness of disease.

We would like to acknowledge the efforts of our optometry team lead by Miss Deepika Nagle, Miss Anjum Zafar Khan and Miss Srishti Sharma.

World Health Organization Prevention of blindness and deafness Global initiative for the elimination of avoidable blindness. WHO document WHO/PBL/97.61Rev 22000WHOGeneva

G Magnusson B Haargaard S Basit A Lundvall A Nyström A Rosensvärd The Paediatric Cataract Register (PECARE): an overview of operated childhood cataract in Sweden and DenmarkActa Ophthalmol201896151510.1111/aos.13497