Treatment with Nd:YAG for posterior capsular opacification after cataract surgery

Background: Posterior capsule opacification (PCO) is a one of the important complications of cataract surgery. Nd:YAG is used for the treatment of posterior capsular opacification with very good outcome. Aim of this study was to analyse the improvement of visual acuity after PCO and also to estimate the total laser energy required to perform capsulotomy.

Materials and Methods: 129 patients between the ages of 35 to 85 years, who had a successful cataract surgery and complained of failing vision after a period of time of the surgery. PCO was graded and pre and post visual acuity was taken and compared. Nd:YAG laser capsulotomy was done for all patients.

Results: Majority of patients (31.8%) had opacification between 6-12 months after surgery. 38 patients had PCO between 13-18 months, while 26 patients had in between 19-24 months after surgery. 12 patients had PCO before 6 months interval after the cataract surgery. After the laser treatment, only 2 patients showed not much improvement, while most of the patients showed a marked improvement of a visual acuity of 6/6-6/12 in 88 (68.2%) of the patients, while 39 (30.2%) showed 6/18 – 6/24 visual acuity. Most common complication of Nd:YAG laser capsulotomy was elevated intraocular pressure.

Conclusion: Nd:YAG laser capsulotomy is found to be a very easy and non-invasive procedure to treat posterior capsular opacification. It is found to be very effective and safe to perform with very few complications.

One of the most common causes of blindness is cataract. The only way to cure this is by cataract surgery, with very good visual outcomes.1 A few complications may occur due to the surgery, there can be posterior capsular tear, detachment of Descemet’s membrane or even vitreous loss. Another most common complication is posterior capsule opacification (PCO), all of which can also lead to visual loss.2 PCO is due to the continuous growth of the lenticular epithelial cells which were left in the anterior capsule during the cataract surgery.3, 4 These cells multiply and form monolayers on the surface of the capsule and continue to do so for many years also after the surgery. This differentiation of the cells result in a structure called the Soemmerring’s ring and a thickened peripheral capsular bag. Near the capsulorhexis, swelling of the cells occur and result in globular Elschnig’s pearls, occluding the vision. The development of PCO may be due to various reasons such as lens material and the design of the implanted intraocular lens.3, 5, 6

The time taken for the opacification to occur may vary from months to a few years in adults. By 2 years, in the younger age groups, 100% of the opacification occurs. As the age group decreases, the rate of opacification also declines. The incidence in adults is reported to be 20.7% after 2 years of surgery and 28.5% after 5 years.7 Uveitis is the most common cause of PCO.8, 9 In India, 50-80% of the bilaterally blind persons is due to cataract.10

Currently, Neodymium Yttrium Aluminium-Garnet (Nd:YAG) is used for the treatment of posterior capsular opacification with very good results. This method was for the first time presented by Aron-Rosa and Fankhauser in 1980s.11, 12 Nd:YAG uses a quick pulsed laser, which is applied to a series of focal ablation in the posterior capsule, thereby creating a small opening in the visual axis. 11 The improvement in glare and contrast sensitivity has been reported after treatment with Nd:YAG in many patients.13, 14 This results in photodisruption and thereby clears the vision.13

Nd:YAG is a procedure that is very simple and can be done within 5 minutes. It does not need hospitalization of the patient and can be done in the outpatient ward itself. Immediately after the procedure, the patient is free to go home. Many times, an improvement in visual acuity is seen before his departure itself.

Like in every treatment, a few complications rarely occur due to Nd:YAG treatment, such as increase in the Intra ocular pressure, a risk of retinal detachment, oedema, endophthalmitis, vitreous prolapse.15, 16, 17

This study was done to analyse the improvement of visual acuity after PCO and also to estimate the total laser energy required to perform PCO.

129 eyes of 129 patients were included in this prospective study performed by the Department of Ophthalmology of Mallareddy institute of medical sciences and hospital, Telangana during a period of two years six months from March 2017 to September 2019. This study was cleared by the Institutional Ethical Committee and informed consent was obtained from all the patients after explaining the nature of the study in detail. 129 patients between the ages of 35 to 85 years, who were included in the study, had a successful cataract surgery and complained of failing vision after a period of time of the surgery. Those who did not regain their visual acuity after the surgery and those who had other pathology affecting vision such as corneal opacity or glaucomas were excluded from the study. Those unwilling to provide consent for the study were also excluded. All patients who were unwilling to come for follow up and those who didnot come for followup were also excluded from the study.

Once these patients were diagnosed having posterior capsular opacification, demographic details were collected from them. A thorough clinical examination was done. Complete ophthalmic history of the patient was taken. Visual acuity was done with Snellen’s chart. Intraocular pressure was measured by using applanation tonometry. Fundus examination, refraction of the eyes and slit lamp examination was also done for all the patients. The PCO was graded. 1 hour before the capsulotomy, 1 drop of 0.5% timolol was added to the affected eye. Dilation of the pupil was done using 1% topical tropicamide and 10% phenylephrine. The eye was anaesthesised using 4% lignocaine just before the procedure.

The procedure and the method was explained to the patient, the equipment was gently introduced. The head was rested on the chin rest in front of the laser and the straps were tightened. Using the slit lamp, the laser beam was focused on to the capsule and energy shots of 0.8mJ were given in a single pulse mode. This energy was increased as required. The pulses were given as close to the visual axis as possible. As infrared rays were produced by the Nd:YAG, an orange-red HE-Ne beam helped to focus the beam on the posterior capsule. The openings were made at 12 o’clock position and progressed towards the 6 o’clock position.

Distribution of patients based on gender 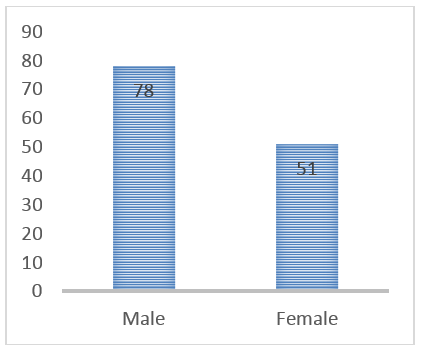 Distribution of patients based on age 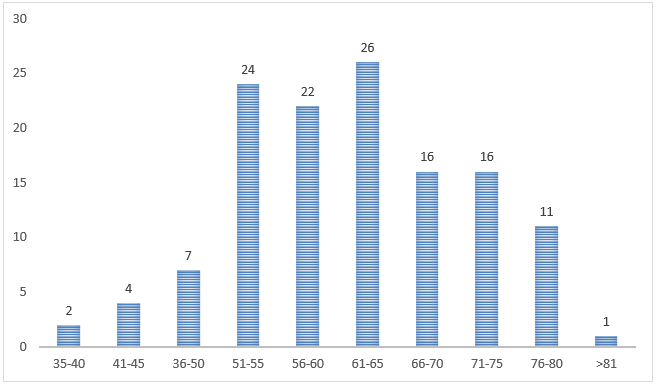 Predominant number of patients had opacification between 6-12 months (31.8). 38 people had between 13-18 months, while 26 patients had in between 19-24 months. 12 patients had PCO before 6 months interval after the cataract surgery. Most of these people were below the age of 50 years (Table 1).

Of the complications seen among the patients after the surgery, the most common was elevated intraocular pressure seen in 28 (21.7%) of the patients. 9 (7%) found glare while seeing and 3 (2.3%) had pitting over the IOL (Table 4)

One of the major complications following a cataract surgery is posterior capsular opacification. This can occur in surgeries with or without the intraocular lens implantation. Nd:YAG is a preferred mode of treatment as it is noninvasive.13

In the present study, 60.5% were males and 39.5% were females. In a study by Bari, 57% were males and 43% females, which corroborated our study.18 In other studies by Hasan et al. and Tayyab et al. also, the males were predominantly affected than the females.19, 20 In contrast, a study by Baratz et al. reported a higher incidence of women rather than men.21

More than half of the patients were between 51-65 years of age. The average age of the patients in a study by Soujanya et al. was 57 years.22 It was observed that the rate of opacification reduced with an increase in age. This was reported in a study by Emery et al. where the average age was 55 years while Westling et al. and Calissendorff et al. found no relation between opacification and age. 23, 24

In our study, we did not categorize PCO based on its types, however, Elschnig pearl type of PCO was found predominantly in a study by Soujanya et al, followed by fibrous type. 22

31.8% of the patients had opacification within 6-12 months of the cataract surgery, while 29.5% of them got it between 13-18 months. A longer duration was observed in a study by Bari of an average of 23 months. Another study by Kundi and Younus also reported a mean duration of 24 months.25 A mean of 2.4 years was observed in a study by Hasan et al.19 Emery et al. found the most common duration of 3-5 years to have PCO in their study.23

There was a marked improvement on the visual acuity among the patients after undergoing the Nd:YAG procedure Similar results were observed by Bari and Hasan et al. in their respective studies.18, 19

Of the complications seen in our study, the most common one was increase in the intraocular pressure, followed by complaint of glare by the patients. IOL pitting was observed in 2.3% of the cases. In the study by Patil et al., increase IOP was the most common complication, however, this was followed by IOL pitting seen in 7% of the cases.26 IOL Iritis was observed in 3.1% of the cases in our study, which was similar to the study by Patil et al. who observed iritis in 2% of the patients.26 In a study by Kaetes et al., iritis was found in 0.4% and vitritis in 0.7% after 6 months of operative period.30 Persistent uveitis was seen in 1.4% of the patients after a follow up of 7 months in a study by Chambless et al.31

Nd:YAG is found to be a very easy and non-invasive procedure to treat Posterior capsular opacification. It is found to be very effective and safe to perform. The complications associated with this procedure are also very minor and far less. Thus, the patients undergoing cataract surgery need to be monitored so that PCO can be detected early and treatment can be started at the earliest.

J C Tan D J Spalton G B Arden The effect of neodymium: YAG capsulotomy on contrast sensitivity and the evaluation of methods for its assessmentOphthalmology19991064703712