Sailaja and Charani: Prevalence and risk factors of allergic conjunctivitis in a semi urban set up

Results: 53.2% were in the primary school, while 37.3% were in the middle school, or between 6-10th class and 9.5% were in the 11th or 12 std. Exposure to dust was the main cause for allergic conjunctivitis as was seen in 32.3% of the cases. Smoke was the second most common cause with 22.8% affected, followed by Dye eyes in 13.9% of the cases. All the patients experienced itching in the eye, and were rubbing their eyes often. (98.7%). 86.1% had watery eyes with over Lacrimal secretion. Majority of the patients (81.6%) with allergic conjunctivitis had allergic rhinitis. 32.3% had asthma, and 13.3% had atopic dermatitis.

Conclusion: Since Allergic conjunctivitis is a mild disease with little morbidity, the patients fail to understand the importance of a regular eye checkup. This can be corrected with the help of health education to the students and the patents in the community.

Simple allergic conjunctivitis is fairly common and the symptoms are usually underrated and, most of the patients do not go to the hospital for treatment. As a result, it is very difficult to estimate the prevalence of this condition. It is however estimated that about 10-30% of the population are affected by this disorder. In United States around 40% of the people are affected by this disorder.6, 7, 8

The simple allergic conjunctivitis are acute, seasonal or perinneal. These are IgE mediated and results in the activation of the mast cells by the allergens and subsequent release of active substances like histamine and causing the dilatation of the blood vessels and irritation of nerve endings, resulting in to symptoms.11 Mechanism of vernal kerato conjunctivitis is not very well understood, but is also said to be because of IgE and also T cell involvement. Atopic kerato conjunctivitis is expected to be due to IgE as well as a delayed hypersensitivity reaction.12, 13

This observational study was conducted in the department of ophthalmology at Mallareddy institute of medical sciences and hospital, Telangana for a period of three years during December 2016 to August 2019. Over 3000 children between the ages 5 to 16 years were surveyed at 3 different schools near our hospital. Out of them 1398 children had various vision problems and were asked to come to the hospital for further treatment. Out of these children, 158 of them were found to have allergic conjunctivitis. The nature of the study was explained to the patents and informed consent was taken from all of them. After clearance from the institutional ethical committee, demographic details were collected from all the patients. The nature and the duration of the conjunctivitis was noted. The socioeconomic status of the child, the nature of the family and its size was also noted.

All children whose parents refused to give consent or whose red eye was diagnosed not to be allergic conjunctivitis were excluded from the study.

Visual acuity was checked for all the patients using Snellen lettered chart as well as the tumbling letter E chart. A slit lamp biomicroscope was used to assess the anterior segment and the posterior segment was assessed using the indirect and the direct ophthalmoscopes. History of redness, itching, photophobia, tears secretion, mucinous secretions were taken down in detail. 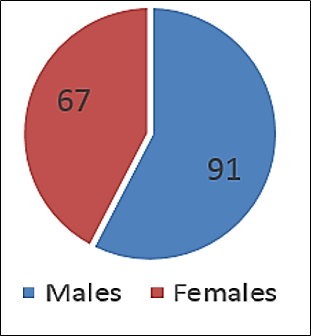 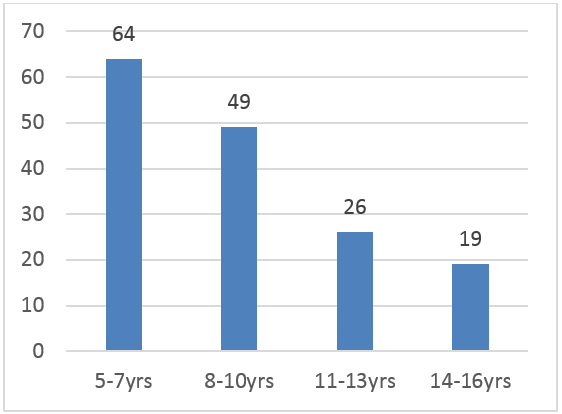 Allergies are known to affect around 20% of the world’s population. 14, 15 They are often familial. Eyes and nose are the most common sites for the allergens to attack and thus, one of the more common allergic reactions is allergic conjunctivitis. Some of the most common allergens are dust, pollen, mold spores, animal dander etc. this results in redness of the eyes and itchy. Most of the times the AC is mild, so the patients do not seek medical help and it goes unnoticed. Repeated reactions of the allergens cause it to become severe.15, 16, 17, 18

The prevalence of AC in a study by Wade et al. was 7.4%, while in the present study it was 5.2%.19 Another study from Tanzania by Hall et al. reported 35% of the children presenting with AC.20 In a study in Ghana, a very high prevalence of 40% was observed,21 and in yet another study, by Abah et al. from Zaire, reported only 7.3% prevalence, similar to our study.22 In the present study, the predominant gender affected was male, but this was not found to be significant. In the study by Wade et al., females were more in number than males with AC, but like our study, this difference too was not significant.19 Uchio et al. also reported higher number of females with AC, while another study by Marback et al. reported more males than females.23, 24

40.5% of the children in our study belonged to the age group between 5-7 years and 31% were between 8-10 years. 12% of children between 16-14 years were affected. AC is said to occur in children above the age of 3 years and continues till puberty. It then resolves itself in most of the cases.25

100% of the patients experienced itching in the eye, and were rubbing their eyes often, while 86% had excessive lacrimation. Ropy discharge was seen in 8.2%, while photophobia was seen in 11.4%. In a survey by Singh and Sinha, itching was the most common symptom corroborating our study. The other symptoms associated with this condition was redness, irritation, water from the eyes.19

Allergic rhinitis was the most common comorbidity in the present study in more than 80% of the patients, followed by Asthma in 50% of the patients. The other comorbidity that was associated with allergic conjunctivitis was Allergic dermatitis. Rasario et al. reported that most of the children with allergic conjunctivitis had allergic rhinitis, resulting in a lower quality of life.6 In a study by Singh and Sinha, the prevalence of AC was 30% of the total OPD in Ophthalmology clinics in North India. They found a variation in the season in their study. The said statistics was in the summer months, while in the others, it was far less, of only 10%.26 A study by Gradman et al. in Denmark reported 42% of Ac to be associated with rhinitis, while 30% had eczema and 24% had asthma.9 In a study by Malu et al., the most common comorbid condition to be observed was refractive error in 15.4% of the cases. 25.

In many of the cases ocular allergic reaction is overlooked as it is minor discomfort and does not lead to severe infections. As a result, patients do not come to the hospital and seek medical attention. Only when the symptoms become more severe, do they approach a doctor.

The best way to communicate to the people the importance of a regular eye checkup, is health education by the professionals working in the community. This would create an awareness among the people, so that they would take a timely action in treatment.