Vasantha N, Haleema A, Raheena K P, Parvathy P S, and Haneef: A study on the prevalence of ocular disorders among school going children in the age group of 5 to 12 years

The aim of this study is to assess the prevalence of various ocular disorders among school going children in the age group of 5 to12 years.

Aim: Vision screening is crucial for early detection of ocular disorders among young children thereby preventing the risk of uncorrectable dimunition of vision. Hence, our programme is planned as early detection of the causative factors in the childhood period and most effectively treat as early as possible.

The purpose of the screening programme is to identify various ocular diseases in children like refractive errors, amblyopia, defective color vision, lid and adnexal disorders, vitamin A deficiency, allergic conjuctivitis, glaucoma, cataract and squint. Identification of such problems and its correction in early stage is crucial for their normal growth.

Materials and Methods: A school based prospective cross sectional study design was adopted to examine children aged 5–12 years in randomly selected schools of Kollam district from January 2020 to March 2020. In this cross-sectional study, two Optometrist and two Ophthalmologist and other supportive staffs screened 3100 school children aged 5 to 12 years for vision and external eye examination. An Optometrist did the visual acuity testing and refraction. Detailed ophthalmic examination was done by an Ophthalmologist. The pattern of visual acuity, colour vision and ocular disorders were studied. Children needing further assessment were referred to the hospital and analysis of the data and data entry done using Microsoft office excel 2016 with Statistical software: R software (EZR 1.32).

Squint was present in 1.4%(42) children. Corneal opacity was present in 0.26%(8), defective color vision was there in 0.2%(6); lids and adnexal disorders 0.13%(4) and cataract 0.03%(1). There were no students with congenital anomalies, congenital glaucoma or Vitamin A deficiency.

Conclusion: Uncorrected refractive error is the most common visual impairment found in school going children. There is a need to set up a regular school vision-screening programme to detect ocular disorders in order to prevent the burden on society on long term. Since most of this morbidity is either preventable or completely treatable, school screening is an effective method to reduce this burden.

Vision screening is crucial for early detection of ocular disorders in young children so as to prevent the risk of uncorrectable diminution of vision. The primary goal of paediatric vision screening is to detect children with unsuspected remediable visual conditions, to implement early treatment and reduce the impact that any untreated condition may have on their educational and social progress.1 The studies suggest that the vision of those children would have been effectively treated with early detection, spectacle correction or amblyopia treatment. Approximately 12.8 million children in the age group 5-15 years are visually impaired from uncorrected or inadequately corrected refractive errors, estimating a global prevalence of 0.96%.2

Amblyopia is one of the causes of visual loss in children. Testing for amblyopia is one of the focus areas of many screening programs because of its prevalence, its effect on children and society, and the effectiveness of amblyopia treatment. Various studies indicate that amblyopia can be prevented by early detection of the causative factors in the early childhood and is most effectively treated in early childhood.

The condition of strabismus or misalignment of the eyes can also be related to visual problems and therefore, there may also be a “critical period” after which permanent vision loss may occur without early intervention. Colour vision deficiency (CVD) is rarely included in screening protocols considering that congenital CVD are untreatable and not always considered as a disease. CVD testing should be included as part of screening programme as it can affect the development of a child. Other conditions targeted in paediatric vision screening programs include various external eye diseases, vitamin A deficiency, paediatric cataract, allergic conjunctivitis, congenital anomalies, and congenital glaucoma.

This was a prospective cross-sectional study conducted among school children in the age group of 5 to 12 years. The study was conducted among 3100 students of 11 schools situated in rural areas of Kollam district, Kerala. Institutional ethical committee clearance was obtained prior to the onset of the study. Study duration was from Jan 2020 to March 2020.

Schools with classes 1-7 (aged 5 to 12 years) children were selected. Preschool children and children above 12 years of age were excluded. A multistage technique was planned to screen children. In the first stage, 11 schools within a 15 km radius of Azeezia medical college were randomly selected. After obtaining ethical committee clearance, school authorities were informed about the screening camp and obtained a written informed consent from parents regarding screening students for various ocular diseases Permission and informed consent duly signed were taken from the principal of the school and a date for screening was fixed. Examination was done in the respective school campuses. The examination team included two Ophthalmologists, two Optometrists and other supporting staffs. Only children present on the day of examination were screened. After recording age and sex, height and weight were measured first. VA was checked using the Snellen's VA chart at 6 m. Children with VA <6/6 underwent a pinhole test to differentiate refractive errors from pathological conditions. Refractive error was diagnosed when a VA worse than 6/9 improved on pinhole test. For children already wearing glasses, visual acuity checked both with and without glass. Cycloplegic refraction and post-mydriatic (PMT) were not done in the school. Color vision was done using an Ishiharas chart, ocular movements were checked, and convergence insufficiency testing was done. Anterior segment examination including lids, lacrimal sac, conjunctiva, cornea, anterior chamber, pupil, iris and lens were done using a torch light. Visual axis alignment was checked using cover-uncover and alternate cover test.

Undilated fundus examination was done for every child using a direct ophthalmoscope. Children needing further assessment and management were referred to the hospital. Details such as name, age, gender, years of schooling, and name of the school were collected for each child 5 to 12 years old. A correspondence card for the eye examination at school was given. Children with spectacles were requested to bring them on the day of the examination.VA assessment, cycloplegic refraction with cyclopentolate/atropine, PMT, orthoptics, a detailed anterior segment and posterior segment examination, relevant investigations, and the necessary management was done for the children who reported in the hospital. Interpretation and analysis of the data were done using Microsoft office excel 2016. With Statistical software: R software (EZR 1.32)

In all the tests, the significance p level was considered to be less than 0.05. 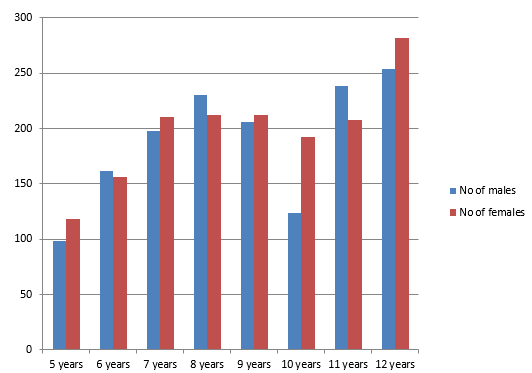 Corneal opacity was present in 0.26%(8), defective color vision was there in 0.2%(6); lids and adnexal disorders 0.13%(4) and cataract 0.03%(1). There were no students with congenital anomalies, congenital glaucoma or Vitamin A deficiency.

Prevalence of ocular disorders and their percentage

Ocular disorders and their percentage distribution 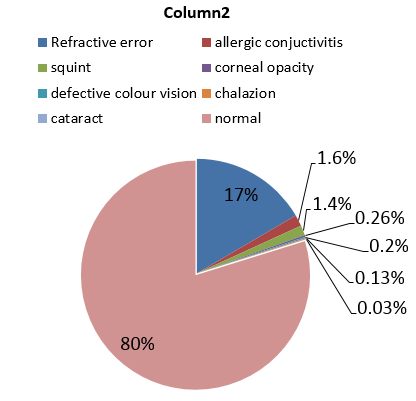 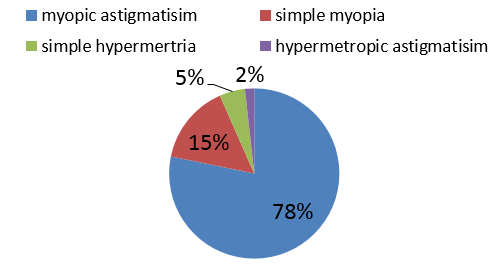 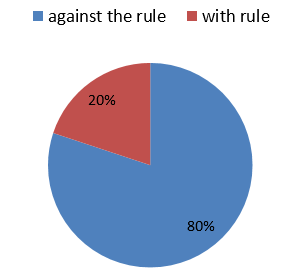 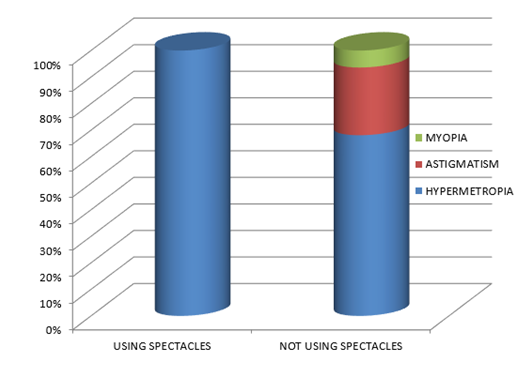 Distribution of refractive error according to BMI 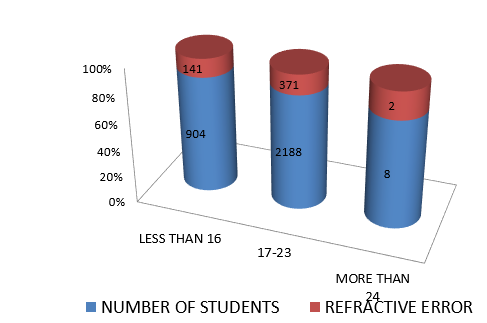 Children in the school-going age group represent 25% of the population in the developing countries (3). To prevent ocular morbidity in children it is important to diagnose and treat ocular diseases as early as possible to prevent burden to the society. Vision testing in children is the process of detecting vision problems and to improve prognosis and reduce disability. Assessment of visual acuity in children is difficult due to the lack of awareness among the society.

In our study, overall ocular morbidity was 20.2% among 3100 children screened which was in accordance with the study from rural area of Tanzania, Africa in which lower prevalence of 15.6% of ocular morbidity was reported in children aged 7-19 years. Refractive errors was the major cause of visual impairment accounting for 16.6% ocular disorders among the age group of 5-12 years. Similar prevalence of refractive errors has been observed among children of 12-17 years in Ahmadabad city.3 The overall incidence has been reported to vary between 21% and 25% of patients attending eye outpatient departments in India.4 Internationally, lower prevalence of refractive errors (2.7-5.8%) has been reported among children of age 5-15 years from Africa, Finland, Chile and Nepal as compared to the present study.5 These differences may be explained by the different diagnostic criteria used by different authors, racial or ethnic variations in the prevalence of refractive errors, different lifestyles or living conditions (e.g. reading, watching TV, or using computer/ visual display units, nutrition). Myopic astigmatism(78.2%) was found to be commonest cause among the refractive error followed by simple myopia 15.2%. Most of the children with uncorrected refractive error are asymptomatic, few noticing eye strain when asked. Out of 514 children with refractive errors, 81.3% children were using spectacles and the rest were not aware of the presence of the error. Barriers to the use of corrective spectacles include: parental awareness of the vision problem, attitudes regarding the need for spectacles, spectacle cost, cosmetic appearance, and concerns that wearing glasses may cause progression of refractive error.6 Most of this impairment is caused by refractive error, for which treatment is simple and effective. So screening such students helps in the early detection of symptoms and timely interventions. This was followed by allergic conjuctivitis accounting for 1.6% only, low prevalence compared to other study Higher prevalence (3-17.5%) of allergic conjunctivitis has been reported by various other studies. Though allergic conjunctivitis rarely leads to blindness, but it can cause school absenteeism due to its discomfort, chronicity, and recurrence.

Squint (1.4%) was the third most common cause of ocular morbidity among children in this age group. Studies done abroad also revealed lower prevalence of squint (0.5%) by Wedner et al., among children of 7-19 years in Tanzania, Africa.7

This was followed by small corneal opacity 0.26% not affecting vision and defective colour vision of red-green color blindness 0.2% were found among male students. Similar prevalence of color blindness has been observed in an earlier study conducted in this part of the country.8 However, lower prevalence of color vision defects (0.11%) has been reported by Pratap et al., from North India.9 Children are less likely to complain for colour blindness. Identification of color vision defects and giving adequate counseling should be done at the earliest in school children to save the child from frustration later on and help him to choose a suitable job. This was followed by chalazion 0.13% and cataract 0.03%. However there were no students with Vitamin A deficiency. This can be explained by higher socioeconomic status associated with healthy dietary pattern of children in those studies.

This study was school based large scale so that it could easily predict the prevalence of ocular morbidity in children in the community to a good extent. Also our study had the advantages that it had a good sample size, trained ophthalmic persons to carry out the examination, and there was a standardized protocol adopted in the screening process.

Involving teachers in school screening program would reduce workload of optometrist. Teachers are the one who were in regular touch with the students, and would be easier for them to identify the children with vision problem at the earliest. Also mothers who are the primary childcare should be given sufficient training to identify the ocular problems in their children.

School eye screening visits should be at least once a year. Early detection of eye conditions in children is an advantage for management. The findings from this study help to treat all avoidable cause of visual impairment and blindness