Prasad, Bandyopadhyay, Tiwari, and Singh: Nepafenac vs bromfenac: A comparative study to determine their role in maintaining mydriasis during cataract surgery

Nepafenac vs bromfenac: A comparative study to determine their role in maintaining mydriasis during cataract surgery

Aim: To assess and compare the role of topical nepafenac (0.1%) v/s bromfenac (0.09%) in sustaining intra-operative mydriasis while doing cataract extraction.

Place and Duration of Study: Regional Institute of Ophthalmology, Rajendra Institute of Medical Sciences (RIMS), Ranchi (Jharkhand). The duration of study was from June 2019 to February 2020.

Materials and Methods: Topical NSAIDs (nepafenac and bromfenac) and carboxymethylcellulose (control) were administered to the cataract patients before Phaco surgery. Pupillary diameters were assessed first at starting of surgery and then after completing the surgery; average values were calculated for the three groups. Study was done on 90 patients having age 40-80 years, planned for cataract surgery with PCIOL implantation.

Conclusion: Both nepafenac (0.1%) and bromfenac (0.09%) administered a day before operation are helpful in sustaining pupil size intra-operatively but bromfenac comparatively seemed to be better than nepafenac in sustaining mydriasis during SICS/Phaco.

In spite of all the recent advances in the field of opthlamology cataract still remains one of the leading causative factors responsible for preventable blindness. The management of choice is extraction of the cataractous lens and placing artificial posterior chamber intraocular lens (PCIOL).1 Tremendous improvement has been observed in various techniques used for extracapsular extraction (ECCE) in last several years, with SICS and nowadays Phacoemulsification technique being most widely used procedure. However, while performing surgery, some amount of injury to the ocular tissue does occur which leads to productions of prostaglandin and leukotriens. Ocular effects like constriction of pupil (miosis) while performing surgery, ocular inflammation after surgery, congestion in conjunctiva, variations in intraocular pressure2, 3 can result due to the action of inflammatory mediators.

Reduced pupillary diameter can hinder various steps in cataract extraction, thereby increasing the chances of causing injury to ocular tissues during the surgery and leading to postoperative ocular inflammation,4 PCT (posterior capsular tear).5 Thus, sustainance of proper mydriasis is an important part of ensuring a good and successful cataract surgery. According to reports, mydriasis more than 6mm, decreases chances of posterior capsular tear by half.

Studies have been done in India on Nepafenac & Bromfenac, for assessing its role in sustaining mydriasis during cataract surgery but more emphasis has been given on its purpose of managing post-operative inflammation.10, 11, 12, 13, 14

Therefore, this study has been performed to compare and assess the role of Nepafenac and Bromfenac (both in topical formulations) in sustaining mydriasis while carrying out the procedure of cataract extraction.

A prospective, randomised study was conducted at Regional Institute of Ophthalmology (RIO), Rajendra Institute of Medical Sciences (RIMS), Ranchi (Jharkhand) on 90 patients of age group 40-80 years, planned for cataract surgery with PCIOL implantation. The duration of study was from June 2019 to February 2020. After taking approval from the Institution Ethics Committee, study was done following the GCP guidelines. Patients who were reported to be having some systemic disease were chosen for study, provided there were no ocular involvement of that specific disease. All the participating patients were asked to give written informed consent.

Those patients who were excluded from study included those having contraindications to the study drugs, systemic disease refractory to any treatment (uncontrolled), posterior synechiae, any history of previous intraocular surgery, nuclear sclerosis of more than grade 3, need of any topical ophthalmic drugs except the study drugs, diabetes mellitus patients having diabetic macular edema (DME) or diabetic retinopathy, CRVO/BRVO, patients with uveitis.

After having selected the patients, they were randomly categorised into each one of the three groups.

Carboxymethyl cellulose sodium 0.5% TDS was administered to Group A patients (30): one day pre-operatively.

Group B (30 patients) got topical nepafenac 0.1% TDS from one day before doing surgery.

Topical bromfenac 0.09% BD was administered to groupC patients (30); one day before (pre-operatively).

Standard rule of treatment was followed in all groups i.e.

Before performing the operation, (one hour preoperatively) Tropicamide (0.8%) and Phenylephrine (5%) eye drops were administered at an interval of every 10 minutes, 3-4 times or until and unless the pupil diameter was measured to be of 8-9mm. In all the groups, surgery was done in same way by one ophthalmic surgeon. Squint calliper was used to measure pupillary diameter first before starting surgery and then after completing the surgery. Data was analysed with the help of MS- Excel worksheet and SPSS 21.0 software. Chi square test helped to analyse the demographic factors.

Results were evaluated and analysis was done via unpaired t- test, comparing the baseline and end of treatment readings in each of the groups. For comparing the significant difference between the groups, ANOVA was done;p- value <0.05 was taken to be significant.

In the study, 90 patients were selected, 30 patients to be chosen randomly for each group. No statistically significant differences were present between the three groups.

Demographic profile of patients in all groups

Comparison between the groups

Mean preoperative pupillary diameter as assessed in the two groups were 8.25 mm and 8.65 mm of control and nepafenac groups, respectively.

Thus, as observed in the control group loss of mydriasis was about 20% in contrast to approx. 5% loss in group B i.e nepafenac group (p<0.003).

Mean preoperative pupillary diameter were measured to be same in the two groups i.e 8.65 mm and 8.65 mm in the nepafenac (group B) and the bromfenac (group C), respectively.

However, in the nepafenac group about 5% loss of mydriasis was seen on contrary to about 4% loss observed in bromfenac group. Thus, prophylactic administration of bromfenac appears to be slightly more effective than in sustaining mydriasis during surgery.

Mean preoperative pupil diameters as measured in groups A and C were 8.25 mm and 8.65 mm, respectively.

At the end/completion of cataract surgery, about 20% loss in mydriasis was seen in the group A i.e control group in contrast to about 4% loss as observed in the bromfenac group (p<0.003). Thus bromfenac given preoperatively is helpful in sustaining mydriasis during cataract surgery. 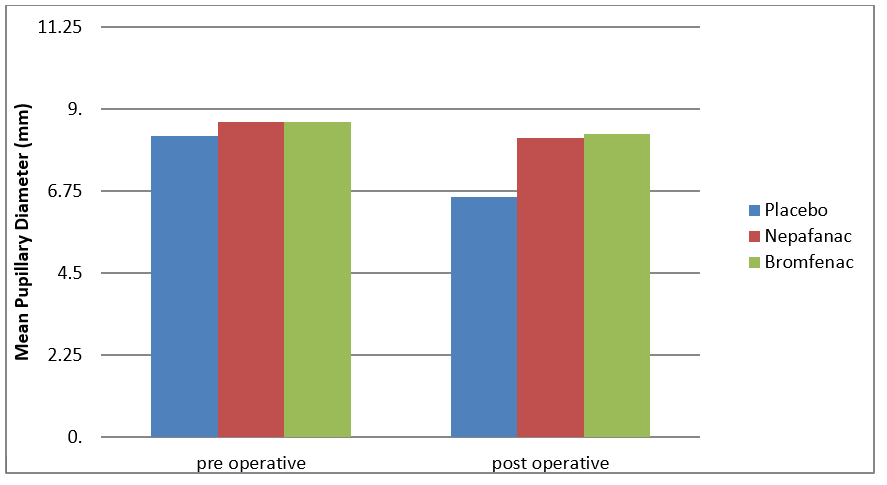 In the study performed, preoperative use of bromfenac and nepafenac showed statistical significant difference in sustaining intraoperative pupillary dilatation (mydriasis) unlike the placebo.

A significant reduction (20%) was observed in pupillary diameter on completing cataract surgery in group A where no NSAID was given before the surgery.

Very minor reduction in pupillary diameter was seen in Groups B (5%) and C (4%) who were given nepafenac and bromfenac respectively. From the study performed the p-value in case of groups A v/s B, and groups A v/s C, was significant (p<0.003).

Many other studies have previously used other NSAIDs such as ketoralac and diclofenac to demonstrate their effect on pupillary size while performing the surgery of cataract extraction.

As demonstrated in a study done by Roberts, diclofenac (0.1%) as well as flurbiprofen (0.03%) both drugs appeared to be equally helpful in sustaining mydriasis while doing cataract surgery.15

Comparison of effects of flurbiprofen v/s indomethacin as done in a study done by Gimbel et al16 showed that both the drugs are equally efficient in sustaining intra-operative mydriasis.

Here the purpose of our study was to show that both Nepafenac (0.1%) given thrice daily and bromfenac (0.09%) twice a day before cataract extraction procedures are helpful in sustaining mydriasis intra-operatively.

Bromfenac, on comparison with Nepafenac, was shown to be having relatively greater effectiveness, clinically, in sustaining mydriasis, although we couldn’t find that much statistically significant difference.

In other words, it can thus be said that both the topical drugs are effective and can surely help in performing more safe and better surgery.