Materials and Methods: In a cross-sectional study, total of 66 patients were identified as having uveitis visiting tertiary care centre. The diagnosis of uveitis and associated systemic diseases was based on a detailed clinical history, ophthalmological examination, general physical examination, and available laboratory tests. The patients were classified according to the standardization of uveitis nomenclature (SUN) working group. All patients were offered treatment as per possible investigation reports or through clinical work up.

Conclusion: We found specific etiology in one third of patients with the help of investigations. Despite of much efforts to identify the cause of uveitis, majority of the cases remained idiopathic or undiagnosed. However, the prompt clinical diagnosis and early initiation of appropriate treatment could achieve good response. Majority of patients in our study received topical corticosteroids.

The inflammation process primarily affects the uveal tissues but may also cause subsequent damage to the retina, optic nerve and vitreous resulting in severe loss of vision. Various complications attributing to uveitis are secondary cataract, glaucoma, cystoid macular edema, or retinal photoreceptor or optic nerve damage.1 As a result, long term treatment and follow ups are must in all cases of uveitis. It also reflects several systemic diseases developing elsewhere in the body which become first evident in the eyes.

Evaluation of a case of uveitis is very important with elaborate history taking, followed by ocular and systemic examinations and investigations to reach a clinical conclusion. When basic investigations like complete blood count, Mantoux test, Chest X-ray PA view, X-ray sacroiliac joint etc. cannot establish uveitis, specific investigations2 such as HLA B27 (Human leukocyte antigen) typing for spondyloarthritis, HLA B5 for bechets disease, antinuclear antibody (ANA) for juvenile arthritis and lupus, double stranded DNA (dsDNA) for systemic lupus erythematosus, antineutrophil cytoplasmic antibody (ANCA) for systemic vasculitis, QuantiFERON-TB Gold assay for tuberculosis, fluorescent treponemal antibody absorption (FTA-ABS) for spirochets, serum angiotensin converting enzyme (ACE) levels for sarcoidosis, real time PCR for various viruses like; herpes zoster, herpes simplex, varicella zoster, TORCH test for viruses, high resolution computed tomography (HRCT) for sarcoid granuloma are advised in uveitis patients to differentiate various causes. However, such tests are advised only if there is a strong clinical suspicion of a specific disease. Laboratory testing should be tailored according to a specific diagnosis rather than advising a full panel of tests. In order to demystify uveitis, we apply clinical skills, knowledge of the disease and available investigations. Hereto, in this study we tried to unravel uveitis etiologies and possible risk factors.

The present study is a hospital based cross-sectional observational study of patients with uveitis attending the outdoor patient department in a tertiary care government hospital in South Gujarat. Total 66 patients of uveitis enrolled during a period from May 2018-October 2019.These patients were examined and investigated thoroughly as per the protocol.

All patients having uveitis visiting our outdoor department above 12 years of age.

All patients having uveitis who fulfilled inclusion criteria were included in study.

Informed written consent was taken from the patient and purpose of study was explained to the patient first. A standard proforma filled up for each patient.

Patient characteristics such as age, sex, duration of uveitis were noted. History of present complaints were noted including duration of presenting complaints, eye to be affected, number of episodes and course of disease whether acute, chronic or recurrent. Detailed history was elicited regarding any systemic illness, treatment taken or family history of uveitis.

The patients were classified according to the Standardization of Uveitis Nomenclature (SUN) working group, endorsed by the International Uveitis Study Group (IUSG) classification system.

Routine laboratory workup included complete blood count, erythrocyte sedimentation rate, liver function tests, renal function tests, Mantoux skin test and urinalysis. Radiological workup including X-ray chest PA view, X-ray sacroiliac joint or X-ray for lumbosacral spine advised whenever required. Ancillary test including ultrasonography was carried out when media opacity is there and not able to delineate posterior segment status. In view of history of uveitis, in patients with strong suspicion for any systemic condition which may be associated with uveitis, outside investigations were advised in tailored approach with patient’s consent.

The final diagnosis was based on chronological history, clinical manifestations and the results of specific laboratory investigations.

Administering corticosteroid either topical or systemic therapy. Immunosuppressive therapy when required. Medical, surgical, dermatological and other speciality references done, whenever systemic disease association were present or suspected, and for taking advice to start corticosteroid or immunosuppressive therapy when required.

Patients were specifically questioned for presence of any side effects with oral corticosteroid at each visit. Laboratory parameters including total leukocyte count, platelet count and liver function tests were monitored timely in all patients on immunosuppressive agents.

Multifocal choroiditis in a case of Tuberculosis 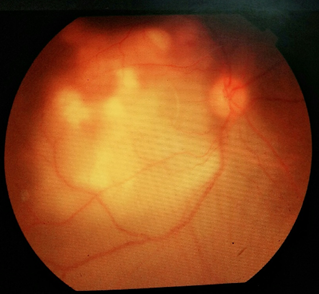 Headlight in fog appearance in Toxoplasmosis 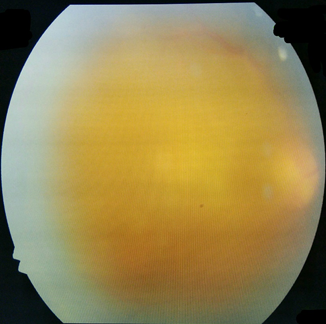 Sex wise distribution among study group and comparison with other studied

Laterality as per presentation of uveitis and comparison with other studied

Panuveitis recorded in (n=2) patients, 1 (50%) patient was suffering from Vogt-Koyanagi-Harada’s (VKH) disease and other was idiopathic.

The study conducted by Das D et al.10 at Guwahati, Assam; maximum patients (69.6%) were in the age group of 20–29 years. In the study conducted by Madhavi KM et al.,11 maximum patients (64%) were seen in the age group of 20-40 years. Above studies taking into comparison we concluded maximum number of patients were in between 2nd to 4th decades. Present study compared with Das D et al.10 study and Biswas J et al.,12 study conducted at Chennai Tamil Nadu. We recorded similar results and Male preponderance among study population. Madhavi KM et al.11 study majority of patients 89.66% presented with uniocular involvement while, 10.34% patients presented with bilateral involvement. Similar findings were recorded in our study. In Biswas J et al.,12 study 30.4% cases presented with unilateral involvement while, 69.6% cases presented with bilateral involvement.results were discordant with our study plausibly explained by different geographic and demographic factors.

The study by Biswas J et al.12 and Palsule AC et al.,8 suggested that HLA B27 associated uveitis was the most common etiology among anterior uveitis population. These results are similar to our study. The study published in 2015 by Das D et al.10 among posterior uveitis (n=56), TB related posterior uveitis was the common etiological cause seen in 21 cases (37.5%). In Biswas J et al.12 study posterior uveitis cases comprised of 25% of the study in population. The etiology could be established in 88.6% cases, and the most common cause was TB. The study conducted by Das D et al.,10 among panuveitis 64 (18.65%) patients; Vogt-Koyanagi-Harada’s (VKH) disease seen in 10 cases (15.62%), sympathetic ophthalmia seen in 14 cases (21.87%), and TB related panuveitis seen in 19 cases (29.68%). In Biswas J et al.12 the most common cause of panuveitis was Vogt–Koyanagi– Harada (VKH) syndrome seen in 19 cases (55.9%).