Chaurasia and Chawhan: Determinents of ocular alignment at 6 month after intermittent exotropia surgery

Determinents of ocular alignment at 6 month after intermittent exotropia surgery

Many researchers2, 5 have reported that surgery for intermittent exotropia is easy and attain satisfying results for surgeons and patients during the early postoperative period, but the surgical success rate decrease with time after the progress of an exotropic drift. After the surgical treatment the postoperative course in intermittent exotropia is variable during several early months. Most cases show an initial overcorrection and then a change to orthotropia or undercorrection according to the exogenic drift. Study by Ruttum6 suggested unpredictability of the postoperative course in the terms of initial ocular alignment and the direction of early postoperative exogenic drift. These postoperative variations depending upon the preoperative factors like measure the target angle and postoperative factors like changes in wound healing process and convergence/ divergence tone of the muscles, so they considered that postoperative changes would stabilize in about six months and that surgical outcomes would be either early surgical failure (overcorrection and undercorrected exotropia) or surgical success (orthophoria/tropia).

This retrospective observational study was conducted in the department of Ophthalmology Chirayu medical college and Hospital Bhopal from April 2017 to March 2019 after clearance from ethical committee. 39 patients with intermittent exotropia (30-55PD) underwent surgery during this period. The inclusion criteria were:

Before surgery, all patients underwent full orthoptic examination. The target angle at the time of the operation was the distant exodeviation that was measured with the fixation target at 6 meter. To determine the target angle, forty five minutes occlusion was performed on the non dominant eye and an alternate prism bar cover test was done. Informed written consent was obtained from the patients; in case of small children consent was given by their Guardian. The procedure of surgery was explained in detail prior to surgery. In nineteen patients, lateral rectus muscle recession (maximum upto 10 mm) and medial rectus muscle resection (upto 6 mm) of one eye was done in non dominant eye and in bilateral Lateral Rectus Recession (Range 5.5-10 mm), based on prism bar cover test measurements determined with refractive correction, was performed. All surgeries were performed by same surgeon under local anaesthesia in adults whereas general anaesthesia was given to small children. Post-operatively, patients were examined on day 1, 1 month, 6 months and then last follow up. The alignments of eyes were checked with orthoptic examination (with and without correction of refractive state of the eye).

For the analysis of the final results, the deviation of 1st post-operative ocular alignment was compared with the 6th month ocular alignment. Surgical outcomes in reference of postoperative angle were compared & grouped as group A (esotropia >8-15 PD), group B (Orthophoria/tropia or esotropia/exotropia-8PD), & group C (exotropia>8-15PD). Success alignment was deﬁned as orthotropia or esotropia/ exotropia within 6-8 PD.

Data was presented as mean, range and average. The variables were compared using t-test and Chi-square test. P -Value≤0.05 was considered significant. SPSS version software was used for Statistical analysis. 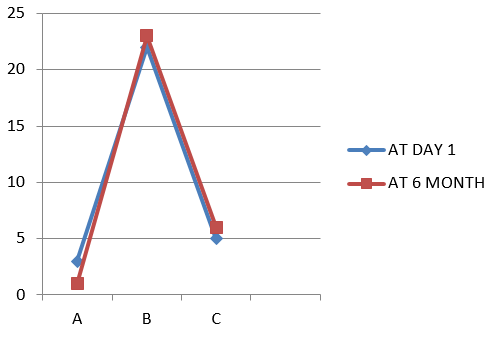 Surgical correction is considered the definitive treatment for deviations to restore the normal ocular alignment by either weakening (Recession) or strengthening (Resection) of extraocular muscles7 Surgery is performed to achieve satisfactory and stable motor alignment to maintain proper binocular vision, amblyopia prevention and cosmetic betterment.8

As we discussed, surgical option is effective and definitive treatment in intermittent exotropia, but the long term results of surgical outcome remain variable and unpredictable. Multiple factors, such as age at surgery, surgical technique and preoperative deviation both distant and near, duration of deviation, presence of amblyopia and associated oblique dysfunction are factors affecting the final outcome. In addition, the importance of immediate postoperative alignment has been proved by numerous studies,9, 10 although the best initial ocular alignment following surgery for exotropia remains controversial. This study is an attempt to find out whether there is any correlation between initial ocular alignment and long term success.

In the present study there was slight female predominance similar results were found in study by Gezer11 where 58.2% patients were females.

The success outcome for orthophoria at day 1 and 6 months post-operatively were 73.3% and 76.6% respectively. The success rate at 6 months post-operatively was 60.4% in the study by Leow et al8 whereas Ruttum6 got success rate of 63% at 6 months respectively, both of which were inferior to our results. Causes of the difference between results may be age group, various methods of measuring deviation and surgical methods which affect the outcomes.

Lee S et al.14 reported a statistically significant relationship between the alignment at postoperative day 1 and at 1 year following both R&R and BLR surgery.

The results of present study had some limitations. First, this was a retrospective study and is therefore subject to selection bias and types of surgical technique and another limitation is relatively low the number of patients in BLR and RR groups.

This study reports pre-operative deviation to be the strongest predictor for favorable outcome. Early ocular alignment of intermittent exotropia post-operatively at day 1 can be a determinant of orthophoria at 6 months. Orthophoric or slight overcorrection gives better ocular alignment but, prediction of long-term ocular alignment remains a grey zone.