Keratometry is the measurement of anterior surface of corneal curvature in its steepest and flattest axis by various methods. There are many advances in measurement of keratometric values. Corneal topography and Modern videokeratoscopes provide an accurate representation of the anterior corneal surface to allow assessment of corneal irregularities in keratoconus, pellucid marginal degeneration, preoperative cataract workup - IOL calculation/TORIC lens implantation, refractive surgery preoperative assessment and post-op evaluation, evaluating pathologies like coneal dystrophies, scars, pterigium, recurrent erosions and contact lens fitting and evaluating the corneal contribution to optical aberrations of the whole eye Astigmatism (more than 0.5 diopters) is a commonly encountered refractive error, accounting for about aprx. 13-40 per cent of the refractive errors of the human eye according to various studies. In our study, 200 eyes of patients were studied over period of 2 year, with autorefractometer which measures total astigmatism (corneal and lenticular) and Bausch and Lomb manual keratometer and oculus topographer which measures anterior corneal astigmatism and results were compared. In our study 92.5% of eyes had regular astigmatism while 7.5% of eyes had irregular astigmatism. Various causes of corneal astigmatism were pterygium, keratoconus, PMCD, corneal degeneration, corneal opacity in that order. No significant clinical cause was found in 74.5% of eyes. Maximum repeatability was found with oculus topographer followed by autorefractometer and Bausch and Lomb manual keratometer.

The anterior cornea works as the major refracting surface of the eye. The integrity of its topography is essential for good vision and depends upon the anatomical and physiological aspects of the cornea. The shape of human cornea is not simply spherical, but is described as a prolate ellipse1 and is commonly astigmatic.1, 2 The surface of the cornea can be disrupted by many pathological processes which can cause major changes in topography and affect the visual performance. The surface topography of the cornea can be disrupted by 3 basic pathological processes. These include abnormalities of the epithelium, degradation of the stroma and external compression from lid or orbital masses.

Keratometry is the measurement of anterior surface of corneal curvature in its steepest and flattest axis by various methods. There are many advances in measurement of keratometric values.

Manual keratometry is gold standard method which usually measures central 2-3 mm of cornea. Many modern topography systems display simulated readings of min-K and max-K, and they have the added advantage of determining the shape of the cornea and providing much information with minimum patient discomfort.

Astigmatism (more than 0.5 diopters) is a commonly encountered refractive error, accounting for about aprx. 13 per cent of the refractive errors of the human eye.3, 4 It is commonly encountered clinically, with prevalence rates up to 30% or higher depending on the age or ethnic groups.5, 6 Astigmatism of more than 0.5 D is common among older adults, and the prevalence increases with age. In general, regular astigmatism is common; irregular astigmatism has been considered an uncommon refractive error. However, with the advent of computerized video keratography, the prevalence of some patterns definable as irregular may be as high as 40%, and significant irregularity may reside in the posterior corneal surface.7, 8, 9 Astigmatism can be divided into congenital and acquired categories.

A detailed cross sectional study of 200 eyes of 100 patients attending outpatient department was done at tertiary eye care centre over period of 2 year.

Detailed clinical history was taken than all the patients were subjected to detailed ophthalmic examination like BCVA, slit lamp examination, IOP measurement, direct and indirect ophthalmoscopy for fundus examination to rule out any posterior segment pathology. Written consent was taken and patients were subjected to keratometric and topographic evaluation by Bausch & Lomb manual keratometer, autorefractometer and oculus topographer.

We have excluded Patients suffering from ocular surface disorders e.g. severe dry eye where keratometry is not possible. Pediatric patients ≤ 10 years due to lack of their co-operation accurate for examination. Patients with unilateral astigmatism of ≥ 1D on subjective correction of refractive error.

Before every measurement, each Instrument is calibrated before use. Patient is explained the procedure and seated comfortably in front of the instrument with chin on chin rest & head against head rest. For Bausch and Lomb keratometer, Mires are focused in the centre of cornea. Keratometry is measurement of curvature of the anterior surface of cornea across a fixed chord length, usually 2 - 3 mm, which lies within the optical spherical zone of cornea. Mires are adjusted as shown in Figure 1. 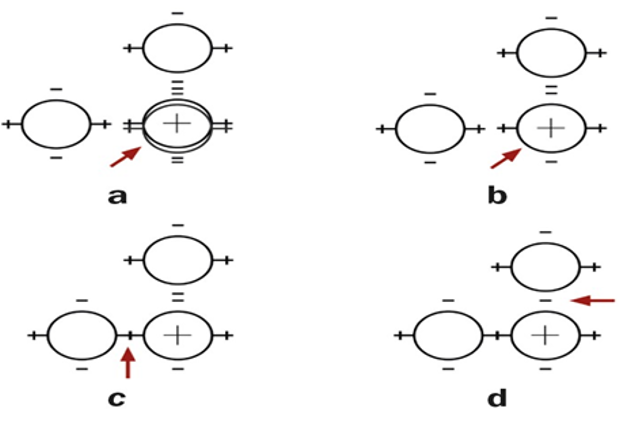 The plus signs of central & left images were superimposed using horizontal measuring control to measure curvature in horizontal meridian. The minus signs of central & upper images were coincided with the help of vertical measuring control to measure curvature in vertical meridian. In presence of oblique astigmatism, two plus signs will not be aligned. Entire instrument is rotated till they are aligned. Recordings on both the measuring knobs were noted as horizontal and vertical keratometry values of cornea. Three readings for each patient were noted.

In automated keratometer, Modern version of scheiner principle is accomplished with infrared light emitting diodes (IR-LEDs) that are optically presented in substitution for the apertures in a scheiner disc for readings. The topography of the cornea is revealed by the shape taken by the reflected pattern. A computer provides the necessary analysis, typically determining the position and height of several thousand points across the cornea. The topographical map can be represented in a number of graphical formats, such as a sagittal map, which color-codes the steepness of curvature according to its dioptric value. Three consecutive keratometric values are noted down for every patient.

All the data values were then subjected to analysis of variance (ANOVA) test to check for the variability of measured values by all the three methods. Post hock analysis was done via Tukey HSD method to rule out any significant difference between individual groups.

A total of 850 patients attending the outpatient department have been screened and total 200 eyes of 100 patients having astigmatism and fulfilling the inclusion and exclusion criteria have been included over period of 2 year.

These 100 patients were investigated for keratometric and topographic evaluation by Bausch and Lomb manual keratometer, autorefractometer and oculus topographer.

Thus the incidence of bilateral astigmatism in our study comes out to be 11.76%. 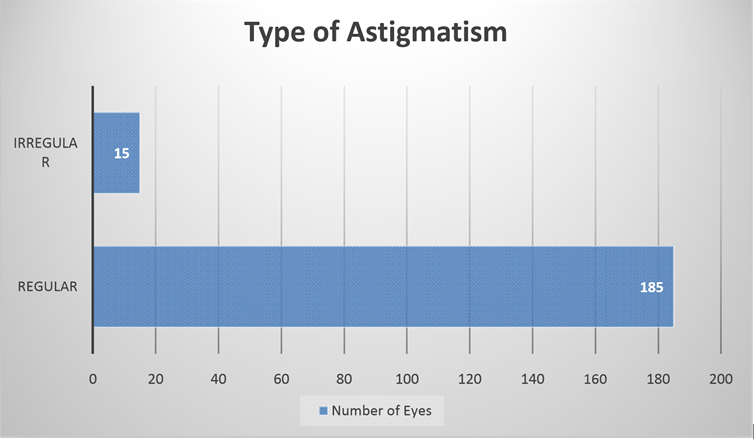 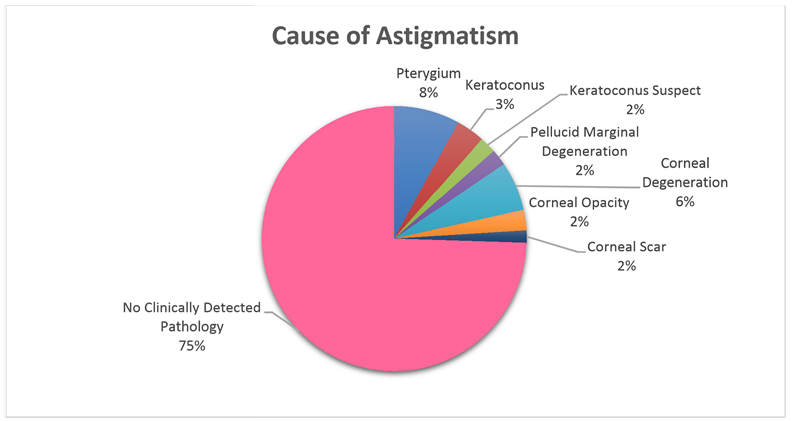 In our study, 122 eyes had clear lens, 53 eyes had immature cataract, 24 eyes were pseudophakic and one eye was aphakic. 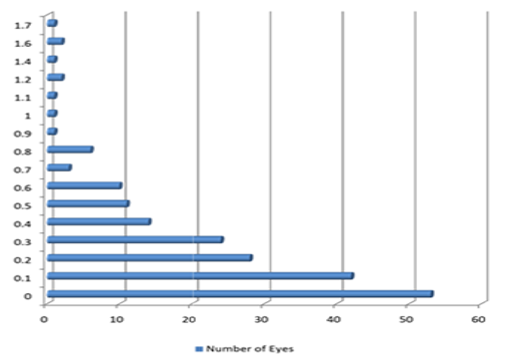 Both right eye and left eye of 100 patients were subjected to calculation of flat meridian of astigmatism (K1) and steep meridian of astigmatism (K2). Both K1 and K2 were calculated by three machines: Oculus topographer, Bausch and Lomb keratometer and autorefractometer. Three readings were taken for each instrument. Difference between Mean values of 3 readings of each instrument was taken.

This shows topography has more repeatability in calculating right eye K1 than other two methods.

This shows topography has more repeatability in calculating Left Eye K1 than manual keratometer and autorefractometer.

This shows all 3 methods had equal repeatability in calculating K2 of left eye. Analysis of variance test was performed for the data and F value and P value were calculated. In all the readings, P value is ≥0.9, which shows that the null hypothesis is accepted and the keratometry readings by all the methods are reliable. ANOVA test (F value) was performed in all the 3 methods and it showed that there is no variability in the keratometry values of all the methods which proved all 3 methods are reliable. Post hock analysis was done via Tukey HSD method which suggested no significant difference between individual groups.

We used autorefractometer which calculated total astigmatism and Bausch and Lomb manual keratometer and oculus topographer which calculated corneal astigmatism. In our study, we calculated astigmatism between age group 16-79 years and its incidence was 11.76% in which majority of age groups was between 41-60 years followed by 21-40 age groups. We found similar spread of astigmatic errors in normal eyes, but the pathological eyes showed asymmetric refractive errors.

The genetic contribution to astigmatism is low, with environmental factors being the major contributors. Down syndrome has been associated with significant ocular abnormalities. Astigmatism (greater than 0.5 D) was the most common refractive error found in the Down’s population and severe astigmatism (greater than 3 D) was found in aprx. 20 per cent of the children. There have been numerous reports of how certain eyelid pathologies can cause corneal distortions and changes in corneal astigmatism. External irregularities of the cornea and eyelids including chalazion, ptosis and unusually tight lids may produce corneal distortions that may lead to monocular diplopia. In our study, various pathologies which led to corneal astigmatism were pterygium, corneal degeneration, corneal opacity, keratoconus, and PMCD etc.

In our study, we found oculus topographer having maximum reproducibility followed by autorefractometer and then manual keratometer.14, 15 We also observed keratometer showed more repeatability in calculating values for normal corneas while topographer is better for better judgement of pathologies affecting corneal curvature.

Our study has some limitations like the sample size is small, larger sample size would help more detailed analysis. Pediatric patients were excluded which can affect the incidence rate of astigmatism which is more prevalent in pediatric age group. Younger age group patients are less in our study.

RB Mandell The Enigma of the Corneal ContourEye Contact Lens199218426773