Aims: To examine the demographics and outcome of management in patients admitted with sports-related eye injuries in one of Jakarta’s eye hospitals.

Methods: Retrospective analysis 24 patients who admitted to a tertiary eye hospital in Jakarta with sports-related eye injuries between 2014 to 2019 was conducted. Standard descriptive statistical methods were used for analysis.

Eye injury remains an important cause of avoidable, monocular visual impairment and blindness.1, 2 Ocular trauma due to sports or recreational activities among youth is an important public health issue. Sports and recreation related activities can result in wide variety of ocular injuries. Often such injuries are more severe and fatal that can be sight threatening as well as cosmetically disfiguring. Most of the sport related ocular trauma associated with facial injuries. The management of severe sports related ocular trauma is always challenging and need to have strategic management.

This study is a retrospective study of patients admitted to a tertiary eye hospital in Jakarta with sports-related eye injuries between 2014 to 2019. Study procedures adhered to the recommendations of the Declaration of Helsinki. Patient privacy and confidentiality was maintained using a data abstraction form.

Patients’ records were reviewed and data such as patients’ age, sex, occupation, cause, and type of injury including the sports played, laterality of the eye, clinical presentations, visual acuity, treatments performed as well as complications of the treatment and injuries were collected and analyzed. The study was approved by Hospital Research Ethics Committee and complies with the tenets of the Declaration of Helsinki.

Type and Cause of injury

The key characteristics of the admitted patients are summarized in Table 2. From Table 2, 16 out of 24 patients (66.7%) suffered from close globe injuries, either in isolation or mixed with adnexa injuries. Furthermore, nine different mechanisms of injuries were identified with shuttlecock and ball being the two most commonly associated causes of sports-related eye injuries, affecting half of the patients (Table 3). Remarkably, most injuries came from playing badminton (9/24, 37.5%) followed by ball games (6/24, 25%; Table 3). 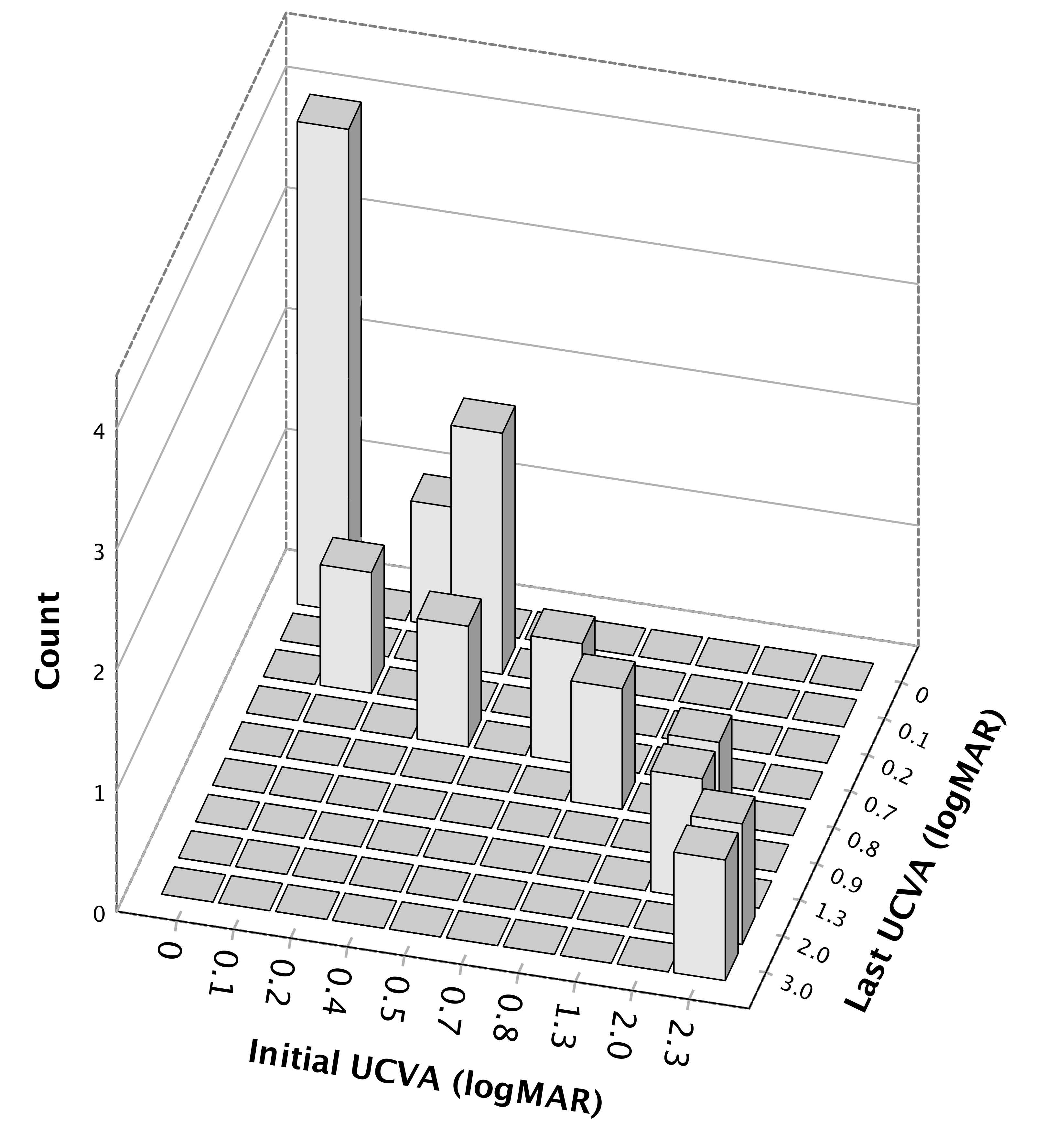 Data for initial UCVA were collected from 22 patients while data for last UCVA were from 15 patients due to uncooperative patients. There was a slight decrease in the last UCVA compared to the initial UCVA (logMAR 0.653 ± 0.8077 and 0.623 ± 0.8774 respectively; Figure 1). Generally, patients who had good visual acuity when admitted were more inclined to have better vision during the follow-up. However, the last UCVA of three patients injured by fishing hook remained more than equal to 1.3 with one of them being NLP (logMAR 3.0).

Data from Table 2 showed that medications were mostly prescribed as the treatment modality in these cases with 16 out of 24 patients (66.7%) receiving them. On the other hand, seven out of 24 patients (29.2%) underwent surgeries and the most common causes of injuries in these patients were fishing hook and elbow and glass (Table 5). Only one patient of the 24 (4.2%) was placed under observation, with a diagnosis of commotio retinae.

A patient with open globe injury due to fishing hook underwent penetrating keratoplasty and it managed to improve the initial UCVA from hand motion (HM) to 1/60. However, one-year post surgery, this patient developed graft-rejection. On the other hand, another patient developed secondary glaucoma due to hyphema caused by a shuttlecock.

Demographics of the patients

Key characteristics of the patients

Surgeries undergone and causes of injury

Over the year 2014 to 2019, the incidence of sports-related eye injuries showed a rising trend. This is in concordance to results from studies conducted in the United Kingdom where the proportion of traumatic eye cases caused by sports increased dramatically from 0.7% in the early 20th century to more than 25% in the past 60 years.10 Furthermore, our study reported that 4.5% of traumatic eye injuries were sports-related which is similar a study conducted in the United States (3.3%).6 However higher incidence of sports related eye injuries were reported by Sechein et al. (34%), Blomdahl et al. (23%), Maurya et al. (23%), Kuhn et al. (13%) and Luff et al. (15%).5, 11, 12, 13, 9

In previous studies, males were seen to sustain more sports-related eye injuries.10 Furthermore, we observed that most of the patients admitted – in fact, 75% - were below 25 years old which is in agreement to previous studies.3, 14, 15, 16, 17, 18, 19, 20 Interestingly, the patients were mostly students, presumably because physical education (PE) and sports program are mandatory lessons carried out by the schools.21 Thus, there could be a higher chance for these students to be injured during the lessons if proper protective eye equipment is not worn.

In this cohort, we observed moderate-risk sports such as badminton being the most engaged sports followed by high-risk sports such as archery and airsoft. No low-risks sports were reported. In Indonesia, badminton is considered the part of the national identity22 and it is not surprising that this sport is played in all strata of the community. This could explain the results where we observed the most common cause of sports-related eye injuries being badminton.

In addition, this correlates with the sheer amount of close globe injuries reported in this cohort as these injuries are typically products of blunt trauma,18, 23 either from the shuttlecock or the racquet. Yet, another study by Mishra et al. reported that open globe injuries were uncommon. This difference could be accrued to the different type of sports played in different countries due to differences in culture and history, which yielded in different type of injuries sustained.10, 14, 15, 16

Our study observed that the injuries were 100% unilateral to either of the eye. Yet, Capao Filipe et al.24 reported that the left eye was more frequently injured as compared to the right (16 over 25 person /64% and 9 over 25 person /36%, respectively). Furthermore, another study from the same author also reported a bilateral injury from bungee jumping.25 As no hypothesis testing was performed on these differences, we could not provide an explanation the differences in data. However, we speculate that these differences could be accrued from the different activities studied.

Consistent with our cohort, the anterior segment is the part of the eye most frequently injured and hyphema is the most common clinical presentation.15, 24 A study by Filipe et al. suggested that anterior structures of the eyes are more vulnerable to trauma.24 Blunt ocular trauma by projectiles or body parts result in disturbances to the fragile artery of ciliary body and iris, causing hyphema.18

Generally, we saw a slight decrease in the last UCVA compared to the initial UCVA. Yet, when reviewed individually, there were vast improvements in the last UCVA as compared to the initial UCVA; in some cases, the UCVA improved up to 0.7 LogMAR. Furthermore, the data’s mean may not represent the true UCVA as some of the data were missing due to uncooperativeness of the patients.

Most patients in the cohort suffer from normal to mild visual impairment and most of them were injured by balls and shuttlecocks. There are three crucial parameters to a projectile that could predict the severity of the injuries it inflict: the impact force, kinetic energy and force onset rate; all of which depend on the size, speed and harness of the projectile itself.17, 18 Therefore, it could be postulated that these objects did not have much as much force when they struck the eyes of these patients, resulting in somewhat minor injuries. Yet, we also observed cases which resulted in severe visual impairment. Direct penetrating injuries - typically a result of fishing hook accidents - generally cause globe rupture, wherein a patient's presenting visual acuity is the most important factor in determining his final visual acuity.26 Given that all patients with fishing hook injuries presented with UCVA < 5/60 (one with NLP), it does not come as a surprise that their final visual acuity did not improve by much.

In this cohort, we observed that majority were managed by medication (14/24, 58.3%) while the rest by surgeries (7/24, 29.2%). This surgery rate was lower than a previous study25 and could be accrued to the difference in sports played.

Generally, the vision of patients treated at our hospital improved after treatment, demonstrating adequate management. However, there were complications caused by treatment and secondary to the injuries. The complication from treatment was graft-rejection 1 year post penetrating keratoplasty. Indeed, this complication is not uncommon where studies have reported the incidence of graft rejection being as high as 18% to 20% of all graft recipients. This reaction is typically seen in the first year and a half post grafting but could also appear as late as 20 years or more post-surgery.27 Regardless, reversibility of graft rejection is possible with a study reporting up to 63% reversibility using topical and systemic steroids.28

Another complication involved the hyphema-associated glaucoma. The acute increase in intraocular pressure (IOP) is associated with clogging caused by red blood cells and their by-products, causing obstruction of the trabecular meshwork; another cause is the initial trauma which may also simultaneously damage the meshwork.18, 29 This phenomenon is also not surprising with a study reporting a relative risk of developing glaucoma after eye injury associated with hyphema to be as high as 6.9. This number further increases in the presence of 360º angle recession up to 7.5.29

Regrettably, there were only two patients who wore protective eye equipment during the game while most of the injuries could have prevented had they worn adequate eye protectors. American Society for Testing and Materials (ASTM) is currently the organization that oversees the majority of sports eye protectors’ standards in the United States and has come out with several standards for not only sports eye protectors but also other protective equipment including: ASTM F803 eye protector for selected sports including the racket sports, women’s lacrosse, field hockey, baseball, basketball; ASTM F513 Eye and face protective equipment for hockey players; ASTM F1587 Head and face protective equipment for ice hockey goaltenders; ASTM F1776 Eye protectors for use by players of paintball sports; ASTM F91 Face guards for youth baseball; ASTM F2714 Standard specification for eye protectors for field hockey; ASTM F659 Standard specification for skier goggles and face shields; and, ASTM F2530 Standard specification for protective headgear with faceguard used in bull riding.4 Furthermore, the eye protector for sports and prescription lenses should utilise lenses made from polycarbonate or Trivex (a new impact resistant lens material) as they are more resistant to forces as compared to the regular materials.30

There are several limitations to this study. This study only included population from one center which may underestimate the incidence of sports-related eye injuries; therefore, multi-centers study or a registry needs to be established to allow for an organized and informative data system. In addition, there were several uncooperative patients of which the UCVA of these patients were not recorded; hence, the UCVA reported may not be representative.

This study has demonstrated how badminton was the most common cause of sports-related eye injuries. In addition, the injuries were typically found in young people especially male. Most of these injuries could have been prevented if patients had worn adequate protective equipment such as eyewear made of polycarbonate or Trivex. Therefore, it is crucial to promote the use of protective eyewear use when engaging in sports.

This research did not receive any specific grant from funding agencies in the public, commercial, or not-for-profit sectors.

A Ma’mun Development of the Educational Sport in Indonesia: The Policy Study Based on the Law of National Sports SystemATIKAN J Kaji Pendidik2015513348