We describe a horizontal chopping technique to fracture the nucleus using an angled sharp edged chopper, thats enters the anterior chamber through a side port in a 30° angle to the main incision. Following the capsulorrhexis, the phaco tip is buried into the nucleus centrally, while the surgeon-bent chopper is placed behind the lens on the opposite side of the main incision. When moving the chopper towards the phaco tip, the angle allows a sharp clean cut of the hard nucleus, dividing it in 2 hemispheres and consequently further in smaller fragments.

In modern Micro-incision cataract surgery (MICS) safe and complete nuclear fragmentation is a most important step to reach successful results in cases with a hard nucleus.

For this purpose a variety of techniques have been described ranging from divide and conquer (first described by Gimpel)1 to numerous chopping techniques with and without the use of ultrasound (US) energy.

Chopping techniques usually require less phacoemulsification time and show less endothelial cell loss.2 The original chopping technique, the horizontal chop, first described by Nagahara3 enormously reduced the need for US energy. Both the horizontal and the vertical chop usually become more difficult to perform in hard cataracts due to density of the nucleus and limitation of space in the capsular bag, while newer techniques, such as the multilevel chop, might be more beneficial in these cases.4, 5

Criteria to provide safety in chopping techniques are phaco power, endothelial cell loss, stress to the zonula and the posterior capsule and instrumental manipulation inside the eye. All of the above factors should be kept to a minimum. In horizontal chopping and so far described related techniques, the actual chopping procedure rather consists of a crushing effect of the nucleus than a chop with a clean cut. This can result in unnecessary strong forces applied inside the eye, stress to the zonula, unequally sized and irregularly shaped fragments or non-full-thickness fragmentation. In sum, these effects can ultimately lead to an increased risk for complications.

Therefore, the authors describe an alternative horizontal chopping technique variation called‚ Aligned Chopping’, which allows a full thickness fragmentation of the nucleus with smooth configuration of the fragment sides. Hardly any rotational movement of the lens results and the application of instrumental forces inside the eye is reduced due to a more efficient, clean chop by the modified chopper.

The chopper used in the described technique is a modified Nagahara chopper with a 26 gauge shaft. The chopping blade can range between 1.5 and 2.0 millimeters (mm) in length, configured with a blunt tip and a sharp cutting edge.

The main shaft is manually bent (e.g. with a forceps) by 30 degrees in one point in 2 mm distance from the chopping blade. As a result, the cutting edge of the chopper points towards the main shaft (distal from the angle point) in a 30 degree angle. 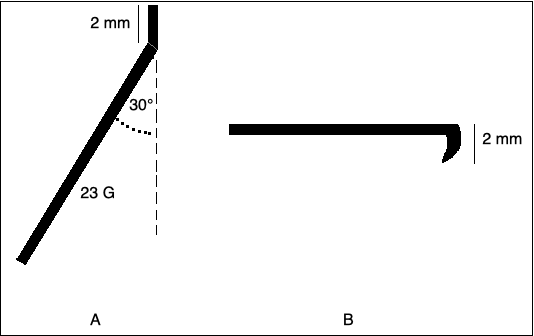 The procedure can be performed starting with a 2.2 mm limbal or clear corneal incision and a side port. The angle between the incision and the side port should only contain around 30 degrees. A continuous curvilinear capsulorrhexis with a large diameter of around 5.75 to 6.0 mm should be performed. In cases with very hard nuclei, hydrodissection is not recommended.

Next, a small trench of around 1-2 mm length and 1mm width has to be sculpted into the nucleus using the phaco tip bevel up. The trench should be positioned from para-central on the incision side towards the central core, where the phaco tip should be buried. Ahead of surgery, anterior-posterior lens thickness is measured using IOL-Master or ultrasound. Normally, trench thickness should be around one third of the total thickness of the nucleus but it can even be more superficial just to be able to hold the nucleus in a stable position. In our cases so far, settings were 50% phaco power, 400 mmHg vacuum and 22-24 ml/min aspiration flow rate. 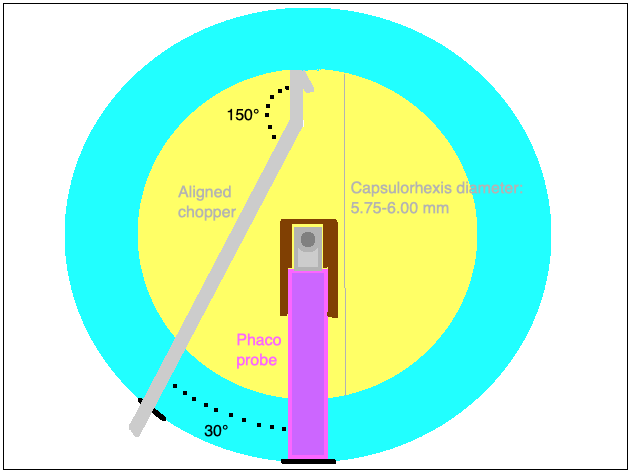 The cutting movement as well as the opposite working forces of the two instruments cause a clean full thickness crack of the nucleus. As usual, the crack has its origin at the chopper an once chopper and phaco tip come closer at the nuclear center, forces and anatomic lens fiber structures induce the crack to continue alongside the phaco probe to the other side of the nucleus (main incision side). Finally, the nucleus is fully cracked in two equally sized fragments. Sometimes gentle lateral movement of the instruments is needed to completely divide the nucleus.

The nuclear pieces can then be rotated by 90° and the same procedure can be performed with each of the halves and further with smaller fragments until fragments are small enough to be emulsified by the phaco tip with a minimum of energy used.

Having analyzed all cases in which Aligned Chopping was performed in the years of 2017 to 2019, we propose that this technique is safe and efficient in all grades of nuclear opacities, while it is especially advantageous in dense cataracts. In a total of over 350 cases, only two capsular ruptures have occurred. No other major intraoperative complications were observed.

In order to reduce endothelial cell loss and to protect all affected anatomic supportive structures of the lens during cataract surgery while using phacoemulsification, US energy should be reduced to the minimum needed. Therefore, in cases with hard nuclei complete division and further fragmentation of the nucleus is crucial to achieve results without intraoperative or postoperative complications.

Besides the Femtosecond-laser assisted surgery, several outstanding chopping techniques and modifications are described to be helpful especially for hard nuclei.6, 7, 8, 9, 10

Many chopping techniques require a high amount manipulation and application of high compressive forces inside the eye. The original phaco chop technique described by Nagahara seems to be comparably effective in removing the lens with regard to postoperativ corneal endothelial cell loss.2 But it can be observed that using the original horizontal chopping in cases with dense nuclei, a full thickness fragmentation can often times not be achieved after the first chop, which makes the case more complex.10

A common problem the authors see in horizontal chopping described by Nagahara and in so far described related techniques named above is the angle between the chopper and the first instrument (e.g. Phaco tip, cystotome tip etc.), which is usually at least above 45° at any time during the chop. As a consequence this angle cannot allow a clean chop - even if the chopper has a sharp cutting edge. Instead, the angle causes a crushing effect of the nucleus during movement of the tips of the two instruments towards each other. The cutting edge of the chopper, if available, cannot point towards the phaco tip for the entire chopping movement due to the angle between the instruments that normally even enlarges continuously during the chop. This effect often results in a non-full-thickness fragmentation with a posterior plate remaining. In cases with full thickness fragmentation a roughly shaped configuration as well as a different size of the two nuclear fragments can be observed frequently - often times representing strong and uncontrolled forces that have been applied for the crack. In addition, unregulated rotational movement of the lens in the bag causing stress to the zonula fibers can be seen commonly in so far described chopping techniques.

In Aligned Chopping, which describes a new variation of the horizontal chop, forces applied inside the eye are reduced by making effective use of the cutting feature of the chopper like no other so far described chopping technique. The cutting vector force generated by the chopper is 100% aligned to the phaco tip. In most cases, a clean full-thickness fragmentation results after the first chopping move. Sometimes, little inside-out force of the two instruments in opposite directions towards the sides is needed in the end to fully crack the nucleus.

Using Aligned Chopping makes applied phaco power, stress to the zonula and instrumental manipulation inside the eye minimal even in cases with very hard nuclei.

Several chopping / pre-chopping techniques have been described that even completely renounce ultra sound energy to crack the nucleus.11, 12 On the one hand these techniques are highly protective for the endothelium, on the other hand, from our own experience, there is a longer learning curve and they become much more difficult to apply in very hard nuclei.

The aligned-chop technique can be performed in a wide range of cataract densities while we assume from our experience that in comparison with other common techniques no significant difference in effectiveness and safety will be observed in future case studies with low-density nuclei. In cases with increasing nuclear density though, our experience has shown that Aligned Chopping continues to be highly effective and safe to perform.

Even though Aligned Chopping has shown to be safe and effective, there is still a potential risk for complications remaining. As possible in most chopping techniques, when pushing the nucleus downwards while burying the phaco tip or when inserting the chopper under the rhexis, tears of the capsule can occur and can possibly lead to a dropped nucleus and/or make vitrectomy necessary.

The authors assume from own experience that learning the technique is relatively easy - comparable to the original phaco chop technique.

In conclusion, Aligned Chopping is a new modification of the original phaco chop technique. Chopping the nucleus is made easier for all types of densities of the nucleus but Aligned Chopping is specifically helpful in hard nuclei. Making more efficient use of the chopping blade than any other so far described chopping technique it has the potential to enormously simplify cataract surgery.